Home » Lifestyle » Knowledge » Marijuana in The Bible: What Does it Say About Cannabis 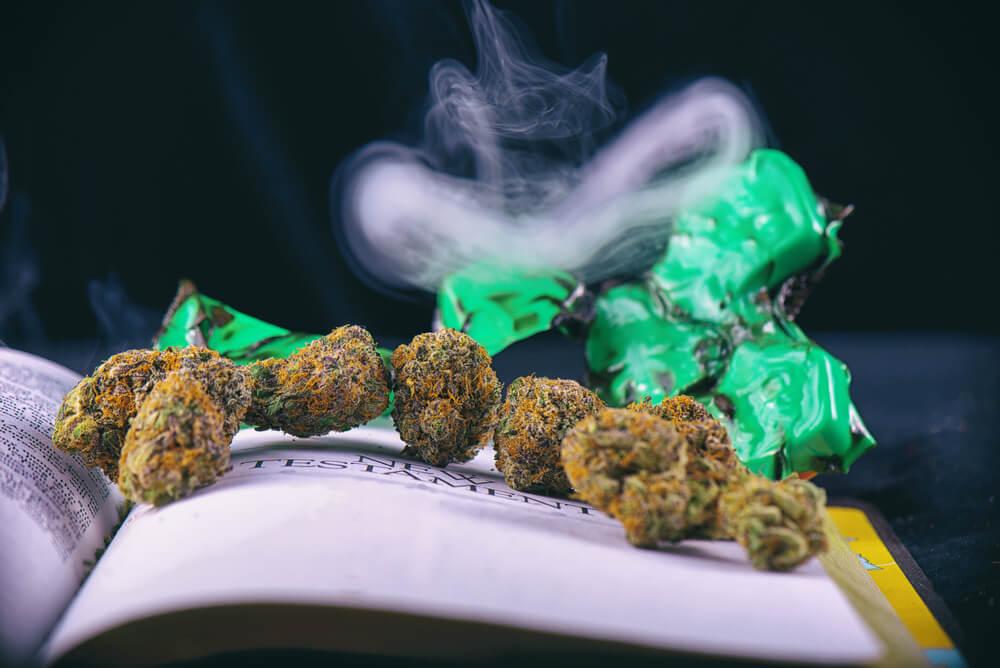 The appearance of marijuana in the Bible is not something preached on during Sunday service. Generally speaking, the modern day Christian establishment frowns on cannabis. Many wonder if this was always the case?

Many ancient traditions from around the world used marijuana both ceremonially and medicinally. It seems reasonable to assume that early Christianity would be no different. The history of cannabis is much different than what the last century would lead you to believe.

The concept of sobriety is closely associated with Christianity. With many of the strict rules about drug and alcohol consumption, coming from the highest rungs of the organization. Only Catholicism continues to have any type of intoxicating substance included in Sunday worship. But the lack of intoxication seems strange when compared to other religious traditions. Around the world, religions have relied on drugs and alcohol for spiritual communication.

Few people know about the perhaps pivotal role cannabis played in the bible. Marijuana in the bible makes more than one appearance, and is often front and center in the storyline. If you look closely, there are many suggestions that parishioners and members of the church used cannabis.

Is Smoking Weed A Sin?

In the very first chapter of the Bible, Genesis, there is clear indication that God surrendered all the natural plants and animals found in the world for humans to consume.

That means all the plants, including cannabis, were therefore on the planet earth for the benefit of humans. Some people argue that God wasn’t speaking about all the plants and animals.

But there is little to support this argument. In Genesis, there is no caveat following the proclamation. There wasn’t a subsequent line saying that humans were supposed to use only certain plants, for certain purposes. Instead, the line encompasses every plant yielding seed, which definitely includes hemp.

During Biblical times, people cultivated hemp for a wide variety of purposes. There is evidence of its use throughout Ancient Egypt. They carved the recognizable leaf into their hieroglyphs. In the Middle East, cannabis also played important roles as a source of fiber and in religious ceremonies. It seems apparent that hemp as a fiber and cannabis as a ceremonial substance were around throughout the Biblical age.

Christ, or the Messiah, roughly translates into modern day English as the Anointed One. To anoint means to smear. So in essence, Christ was the Anointed One and presumably smeared with some form of ceremonial substance. Some experts, including Carl P. Ruck, believe this substance contained cannabis.

In Exodus (30:22-23), there is some evidence about a recipe for the anointing oil used by Jesus and his apostles. Jesus often requested that his apostles (also translates roughly into the anointed ones) prepare this special oil when working with worshippers.

Among the herbs, olive oil and other components, the anointed oil recipe calls for six pounds of kaneh-bosm. Most agree that Kaneh-bosm is actually cannabis. According to Biblical scholars, The apostles smeared this potent and aromatic anointment oil on themselves and others, under the direction of Jesus. There is even a strong possibility that Jesus himself used it.

The usage of anointing oils was quite widespread; religious leaders even used in instead of water during baptismal ceremonies. The Kaneh-bosm was to be used immediately before or after the initiation, or what we now know as the baptism. Water baptisms did not replace a good drenching with oils until much later.

After Jesus died, his disciples continued to anoint worshippers with this powerful mixture containing what is thought to be cannabis. It was smeared on the sick and destitute, triggering miraculous healing. Considering what we now know today about the many medicinal qualities of marijuana, this is an interesting connecting.

Marijuana in the Bible, as evidence in the ceremonial herbal concoctions, could be some of the first records of cannabis as medicine. After-all, ill members of early Christian sects were advised to call on the elders of their community to anoint them with oil in the name of Jesus.

Cannabis, when absorbed into olive oil, quickly absorbs into the skin. Through this method, its still used today in balms, salves and massage oils to treat a variety of illnesses.

Marijuana in the Bible

There is, of course, no direct proof that Jesus and his disciples used cannabis for healing, but it seems possible. Even the simple fact that other cultures in the same region relied on the healing powers of marijuana indicates the knowledge was there. Plus, there are some tentative links in the scriptures,  of cannabis as a ceremonial oil with miraculous healing powers.

Experienced cannabis users know that marijuana use has few adverse side effects. Compared to alcohol, Which is regulated in great detail throughout the scriptures, cannabis is much different. There are limited ways through which it may be considered sinful. Perhaps the reason why marijuana in the Bible is not as regulated is that its effects are much gentler. It is a healer after all.

Old School High: What Does the Bible Say About Weed?

Hemp Toilet Paper – Why Is That Even a Thing and Should You Use It?