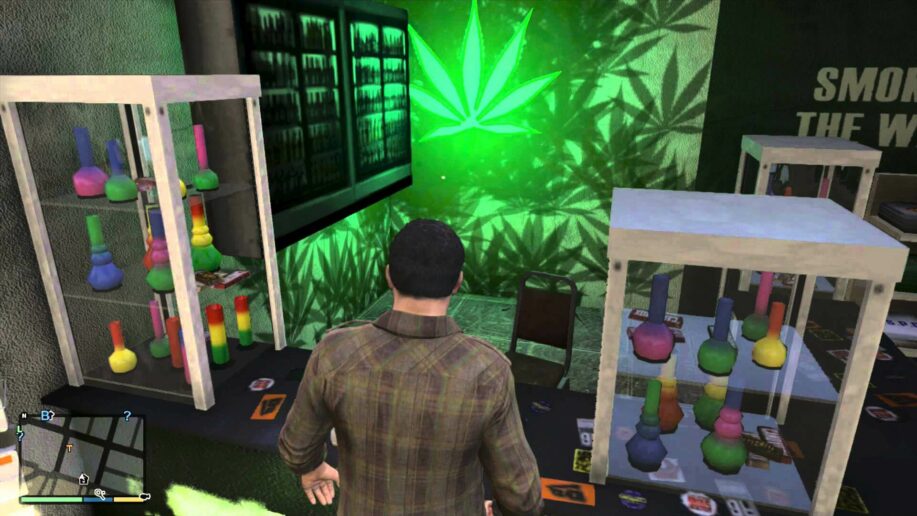 Sitting around in a circle, passing around a joint, and staring at the same old boring faces has little entertainment value. These days people turn to video games in a mindless quest for stimulation. Everyone zones out stares blankly at the television and stops all intelligent communication. Aren’t there any social weed games out there? Of course, there are!

Here are the top choices for stimulating, entertaining weed games that don’t rely on useless video games. The following should hopefully get you stoned, giggling and best of all, social. 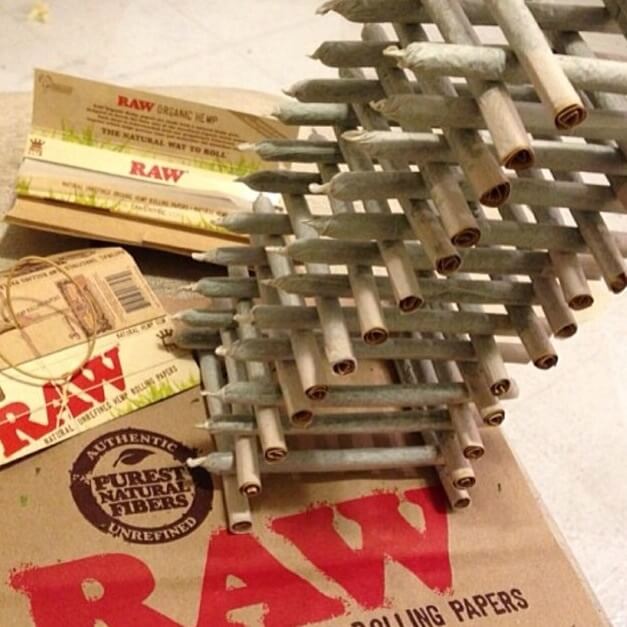 You should already have a Jenga game lying around your house somewhere, especially if you are still living at home with your parents. Transforming the game into the perfect stoner rendition is easy. It also might help to get stoned first to get your creative juices flowing.

On the long edge of each block write out instructions, like “Take a puff and pass,” “Tell a deep, dark secret,” or “Take the next block with your eyes closed.” Use your imagination! Assemble the standard Jenga tower, and begin! Every time someone pulls out a block, they have to follow the instructions. Make sure to have your stash handy, as you’ll obviously have many blocks telling you to get high. 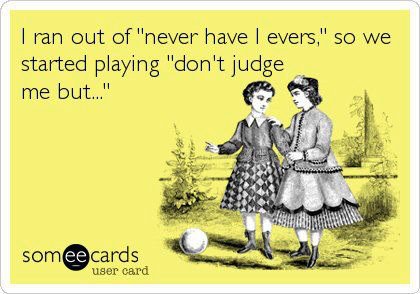 Remember this game from your high school days? It’s still a classic, especially if you are trying to get to know a bunch of new friends quickly. In this version, instead of drinking your admissions, everyone has to have a joint lit and toke them. If you are not familiar with the rules, they go like this:

3. Toking Game to Your Favorite Movie

Smoking weed and watching movies go hand-in-hand, but why not make it way more interesting by transforming it into a weed smoking game? First, put on your favorite film, preferably a stoner movie you’ve seen before. Next, write out a few ‘drinking’ game rules that connect to the plot of the movie.
Die Hard is always a good pick, where everyone smokes up when John (Bruce Willis) talks to himself or kills someone. Another popular choice for this game is any of the Fast and Furious movies. Hit the bong when someone drives backward, when the camera focuses on a gear shift, and when someone gets punched.

A hot commodity in headshops everywhere, it’s still difficult to find online. Smokin’ Dice is a game of chance, based on a set of specially designed dice. Each side has an instruction that you must follow if rolled. Each of the four dice rolls together and their instructions combine for a hilarious experience.
For example, you could roll:
“Player of your choice,” “Takes 2 tokes,” “While spinning in a circle,” and “Laughing as loud as they can.”
Or someone else might get:
“You,” “Take a Puff,” “In Slow Motion,” and “Dance.”
It’s all about the luck of the roll!

This game would make a great family dinner game if it didn’t get you so ridiculously high. You’ll need one sheet of paper towel, one elastic band, a penny, and a wide mouth jar. Place the paper towel over the mouth of the jar and secure into place with the elastic band. Gently put the penny down on top of the paper towel in the center.

As each person passes the joint around the circle, they must burn a hole in the paper after toking. As each person takes a hit and burns another hole, the penny’s position becomes more precarious. Whoever causes it to fall, loses. 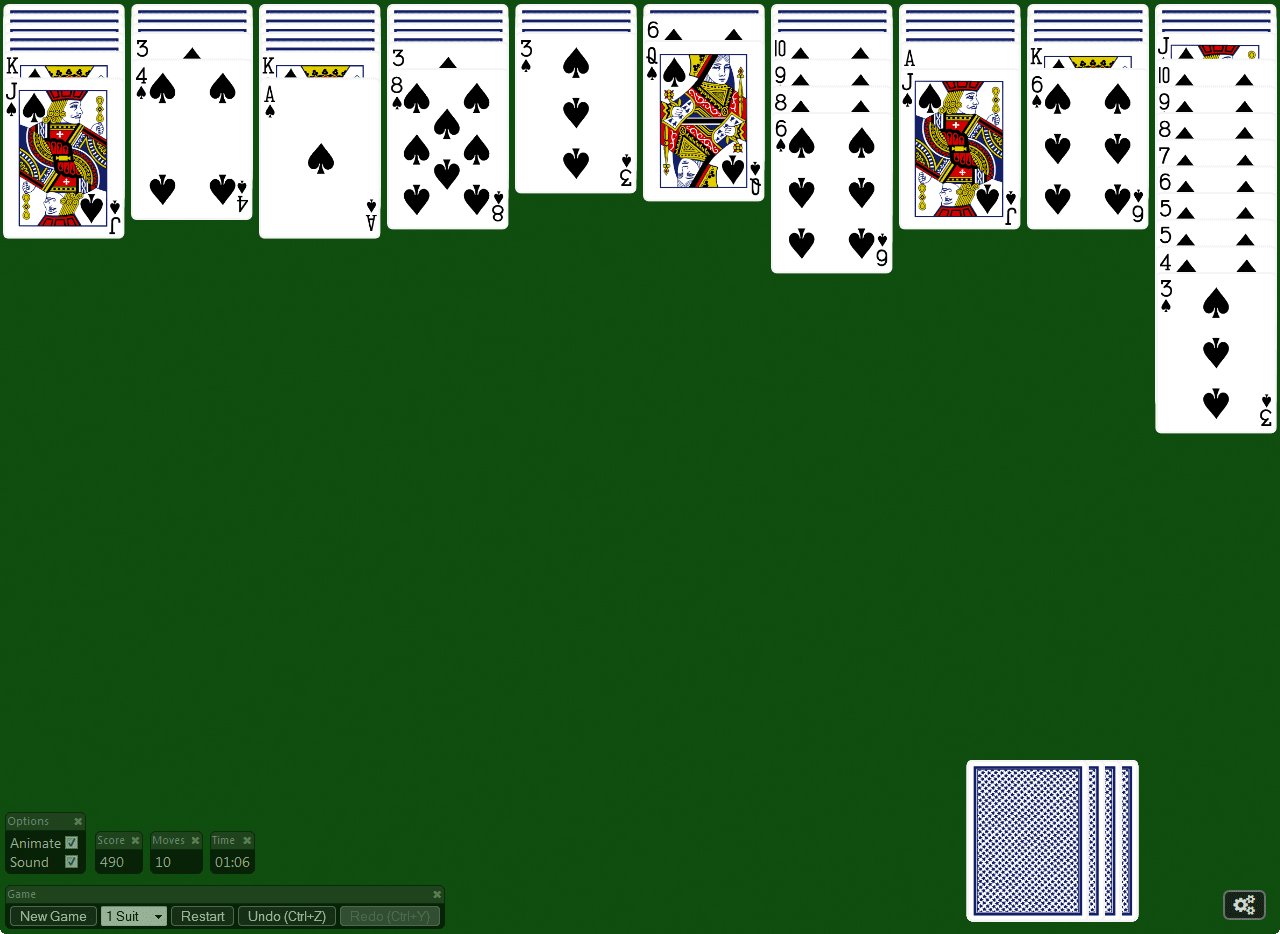 All of the games on this list are challenging if you’re alone, but that doesn’t mean loners can’t get in on the weed games too. Set up any style of solitaire you want, there are a thousand different versions, and everyone has their go-to.

Everytime you lose, you have to take a bong hit. Obviously, the game gets a little harder each time you lose. Good luck as you keep plugging away, and the solitaire gets increasingly confusing.

There are many iterations of clothing-optional games, but strip smoker is all about marijuana. Adding in the element of clothing removal adds a little bit of risk to this X-rated game, but maybe that’s why it’s so popular.

Many of the games on this list could even be livened up a little if the loser has to remove some clothing. But if you want the most straightforward iteration, why not just see who can hold in a bong hit the longest? The first person to choke has to take off their shirt! 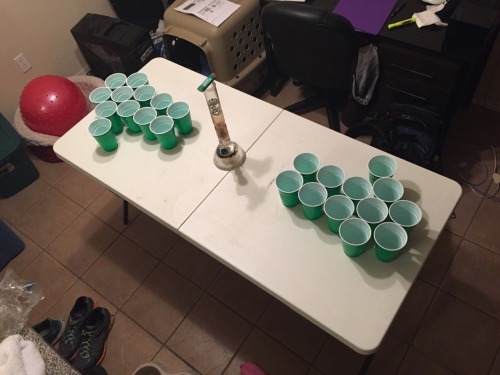 Beer pong has long been the favorite fraternity party game, but have you ever heard of bong pong? The set up remains the same, but the punishment is no longer about chugging a cheap warm beer.
Now, players are required to hit the bong instead of pounding a beer.

If you want to make it more interesting (and far more intoxicating), why not combine the best of both games? One player sinks the ping pong ball into a dixie cup of beer, and they get to take a bong hit. The other player must chug the beer.

Medusa is a great game that takes inspiration from some of your favorite children’s games from summer camp. Only this time, it’s slightly more corrupted. Gather your closest friends into a circle on the floor; everyone must have their heads bowed, looking at the ground.

Counting down, everyone needs to lift their heads at the same time and stare directly at another player. It can be the player next to you, or across the circle, it doesn’t matter.
You are safe if you find yourself looking at someone who isn’t looking back at you. But, if you are staring directly into someone’s eyes, that means both of you have to take a toke. Good luck trying to keep a straight face as this game unfolds.
Wheel Of Weed
Its highly recommended to set this up in advance, but once you’ve collected all the separate pieces, it’s guaranteed to entertain for years to come. You’ll need to source an old spinner from Twister or make one of your own. Think back to your early years in art class, or just google it.
Divide the spinner into eight equal parts, like cutting a pie. Label each section with one of the following:

Once set up, let the games begin! Each player takes a turn, spinning the wheel and performing the tasks. Keep it up until everyone has smoked themselves under the table, or the weed is all gone.

On-the-go but still, want to get your weed game on? Why not download one of the games available for Apple and Android products? Some of them are even educational! 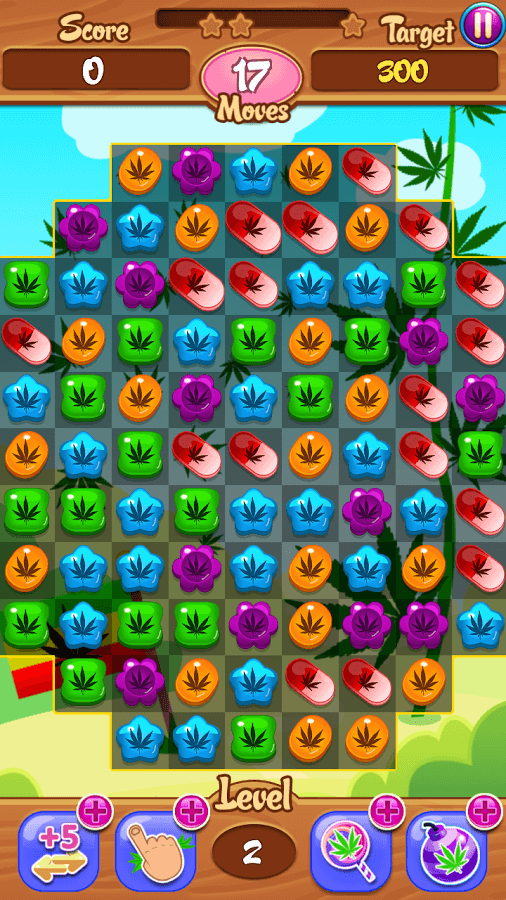 Anyone trying to get over an old candy crush addiction should avert their eyes. Now, you can get addicted all over again with the Weed crush game. Swap around cannabis products and edibles to create perfect matches. Just don’t blame me if you can’t turn your phone off again. 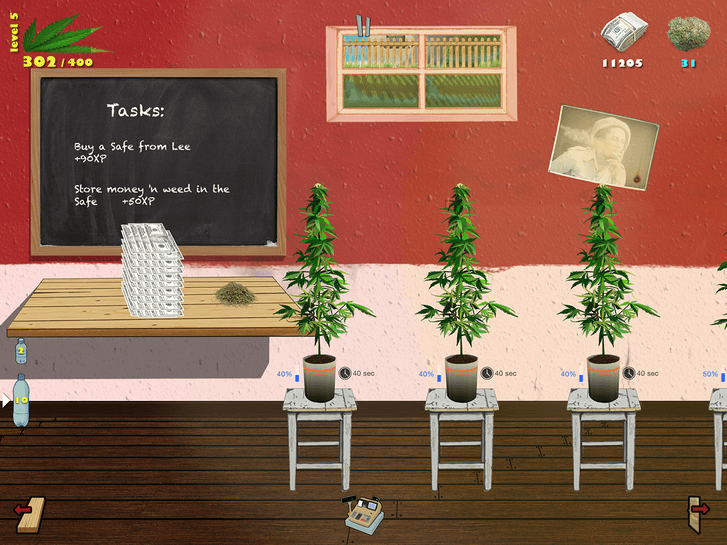 Learn the basics of any marijuana business through the Weed Firm game. Grow weed using carefully crafted techniques, including music, water, and soil variations. Learn to sell to qualified customers like Rastafarians and nurses. As you make money, you can expand your business into other avenues. The world is your cannabis oyster. 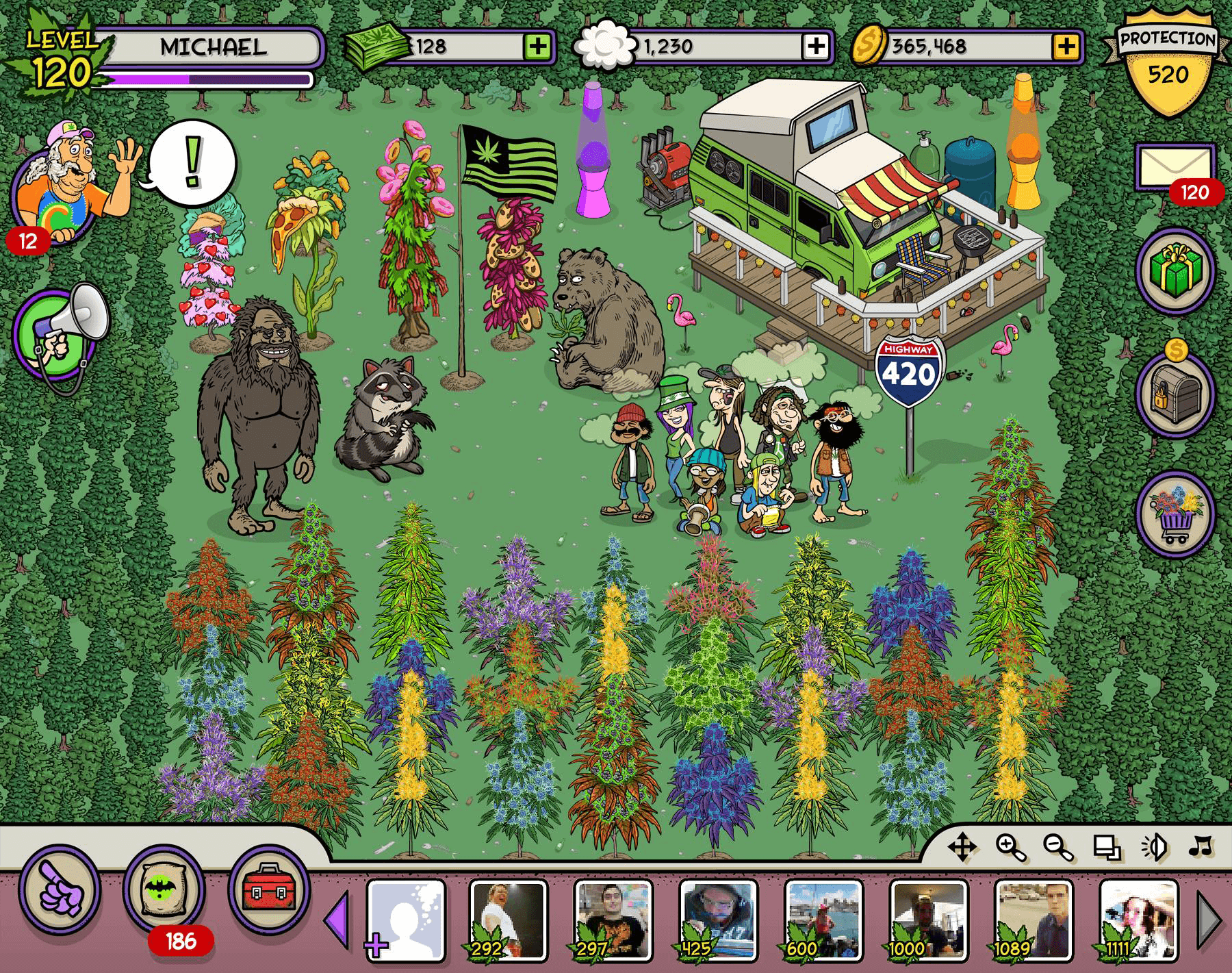 Grow weed and not get in trouble with the law, it’s everyone’s dream, right? We’ve all played the addictive farming games, growing carrots, wheat, and potatoes, but what about weed? Start up a perfectly manicured weed farm with tons of chapters to unlock. 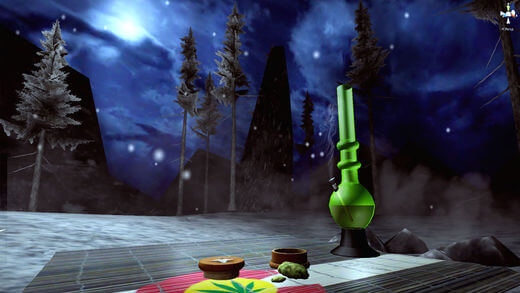 A weed game with great graphics and entertainment gimmicks. Learn to roll the perfect joint digitally, then smoke it virtually all by using your phone’s tiny microphone. It works well with any device, and also makes a great party trick. 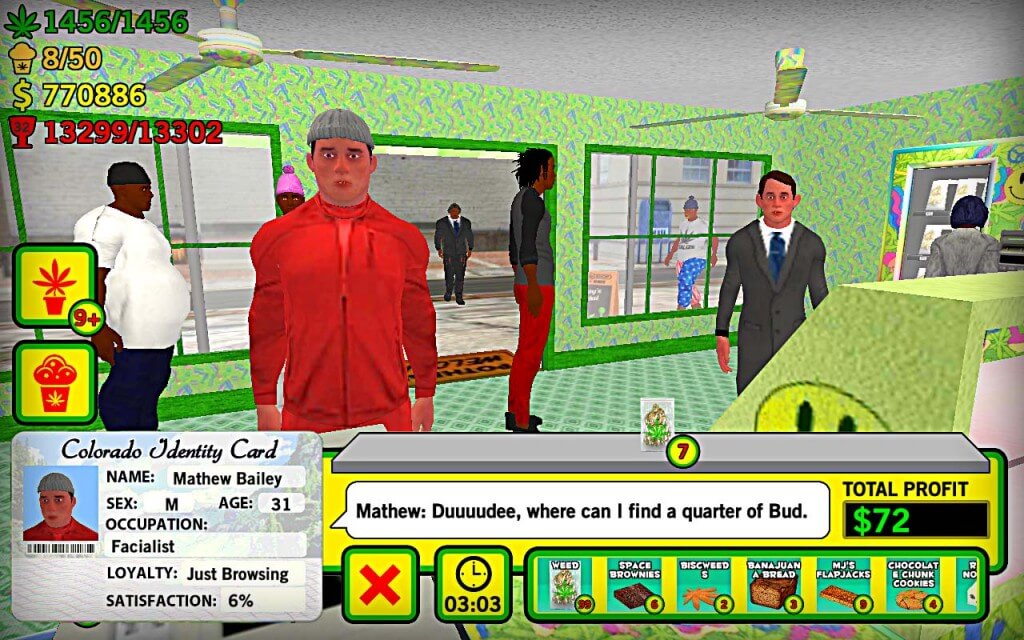 Bake delicious and potent baked treats in this competitive business game. Keep on top of orders, try out new recipes and destroy the competition. As your business grows, you’ll earn the respect of your customers and make bank.