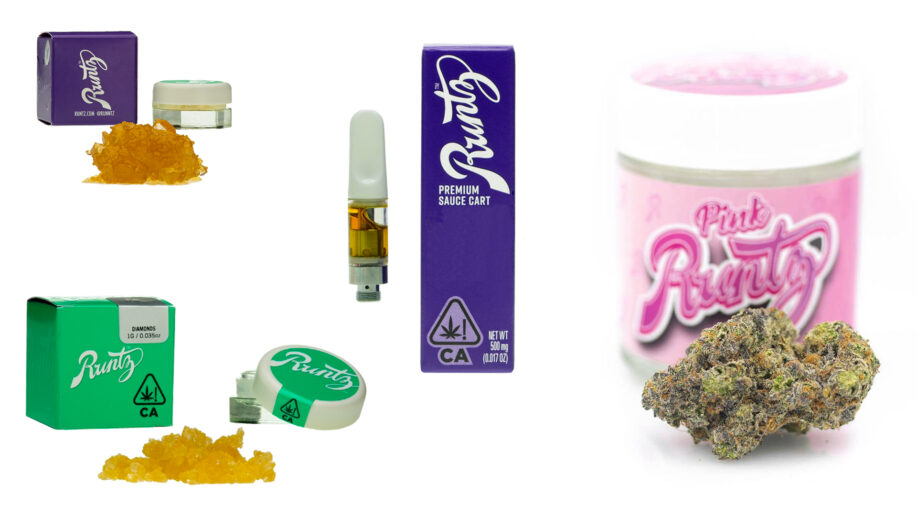 The Runtz brand took off so much that the well-known Cookies brand recently absorbed them.

The Runtz strain originates from California and has become popular on a global scale. You can find this fruity flavor tasting cannabis strain in Cookies dispensaries throughout California. If you buy it anywhere else, there is a high chance that it’s not genuine Runtz. The brand’s creator even raps about the counterfeit problem in some of his songs, but he is not too concerned about others getting some money off the brand.

We take a closer look at the history of the Runtz weed strain and how it all started. You won’t find many good resources on this topic, but luckily you got an insider right here.

I happen to grow up and live in the Bay Area and have the same circle of friends that the Runtz team does. I’ve met the creator of Runtz and can tell you that Yung LB is a marketing wizard.

Many people who sell cannabis illegally are trying to profit off this strains’ hype and disguise other strains in counterfeit bags as Runtz. Unfortunately, it’s very easy to obtain fake Runtz bags online. As soon as new Runtz bags are released, you can find them on sale on different marketplaces shortly thereafter. The same goes for their glow rolling trays, which are being sold for half of the originals price.

It’s a small investment for criminals because the Runtz packaging costs less than a quarter each! It’s incredible to see that capitalism in China has led to them helping criminals in America.

The street dealers are capitalizing on the buzz and making big profits while doing so! Sometimes they are using cannabis that is purple and resembles Runtz; other times, strains that don’t even come close. The only way to get real Runtz is from someone on the Runtz team or a licensed dispensary or delivery service in California.

Before Cookies took off in the Bay Area, many street dealers claimed they had it, which helped spread its awareness. The Runtz brand shares a similar style of unorthodox marketing, which can be attributed to its popularity. What’s ironic is these fake Runtz bags were most likely filled with Cookies weed in California.

Another marketing tactic shared between these two brands is music. In fact, Yung LB made music with Berner in the past before the Runtz deal. Here is an interview with Yung LB from a few years ago, explaining when he first Berner.

Unfortunately, there have been many counterfeit Runtz carts spotted all over the USA. Sometimes, these enter the market even before the real Runtz cartridges. Now that the actual Runtz brand officially released prefilled cartridges, the black market has counterfeits. There is, of course, a major difference in quality. Real Runtz carts are clean of pesticides with lab tests to prove it, while you never really know what’s inside of the fakes ones.

The cannabis oil cartridges were hit hard before the fake bags of designer weed were targeted after. Websites and social media platforms helped spread light on fake THC cartridges even before the mainstream media caught on.

Only official Cookies dispensaries sell the real prefilled THC oil Runtz cartridges. They use a live resin sauce, which comes with a higher price tag than regular distillate cartridges. Live resin sauce cartridges contain a full spectrum extract, perfect for you to feel the entourage effect. This basically means you’re going to get more from the cannabis plant than just isolated THC. These cartridges include terpenes and other cannabinoids from the cannabis plant that all work together to give you a more intense high.

So, Who Created Runtz?

As you can see in the post above is the rapper Yung LB. As always wearing a lot of expensive diamond jewelry, including a Cookies brand pendant. Another member of the Runtz team is the rapper Nero. He’s the creator of the White Runtz strain. Both brilliant businessmen who helped to put the Runtz on the map.

The Runtz team made so much noise in the United States, it caught the attention of the Cookies brand. Google trends show that Runtz almost surpassed the Cookies strain on Google around May of this year. It also looks like the Runtz strain was trending along with Cookies weed with searches on Google this year but has started to decline for the first time. I found it very interesting that while the popularity of Runtz was surging, it looks like it helped evaluate the search for Cookies weed too. Still a wise investment by the Berner. A move that is very common in the tech industry (we see you Mark…).

There is a ridiculous amount of Instagram & Facebook accounts claiming to have the real Runtz weed for sale. If you take a closer look, you can find countless stories of people claiming that they have been scammed. It’s a common thing that people order Runtz online (mostly from people that they don’t know) only to find out they have been duped of their money. Some of these fake Instagram accounts even have pictures of Yung LB trying to pretend to be him. The real Runtz account on Instagram will never send out a package to you, never ever!

As we mentioned above, the Runtz team has collaborated with the Cookies brand to put them in their dispensaries. You can also find them in other dispensaries and delivery services such as the flowercompany.com. They have some premium prices attached to their concentrates. A half gram goes for up to $60.

Now that the Runtz team is part of the Cookies fam, they will be able to have their strains cultivated by Berner’s mad scientist cultivators. Not to say the black market doesn’t have some fire (at a better price), but knowing it’s clean from pesticides is crucial for your health. Expect to pay the most for eighths of Runtz weed. Many different strains have been crossed with the Runtz strain to create new strains too. Some of these new strains include White Runtz, Pink Runtz, Obama Runtz, and Hawaiian Runtz.

It all started with the Runtz strain before many other variants of it became popular. Afterward, the White Runtz strain really took off in popularity throughout California and soon after in other states too. The first Runtz strain is a cross between Gelato and Zkittlez, both popular strains in California.

The Runtz music has helped spread the popularity of this sweet tasting cannabis strain. They created catchy phrases in their lyrics such as Runtz yo life up. You can see a lot of celebrities with this top-shelf cannabis brand.

Above is a genuine Runtz pre-roll that I purchased from Flower Company, a delivery service in the Bay Area. Honestly, it was one of the best pre-rolled joints I have ever tried, and trust me, I tried a lot. The quality made me and my friends repurchase this preroll. Again, the only way you’re can be sure to buy a genuine Runtz brand product is by going through a reputable and licensed source. This also means that if you’re in a state where cannabis is not yet legalized, chances are very high that the weed inside your Runtz baggie is not the real deal.

If you want to grow your own Runtz weed, you can do that too. The official place to grab Runtz seeds is their official website – www.runtz.com. The prices for official Runtz seeds are the highest in the market. There are a lot of negative comments on their Instagram page, expressing frustration because of the high prices.

Beware of seed banks that do not have a great reputation because they might be selling fake Runtz seeds. We’ve seen some Instagram accounts claiming to sell “real Runtz seeds” but we all know that you better avoid these Instagram sellers. We want to encourage you to do your own research. Check Trustpilot reviews and look for reviews on social media or through Google.

Now that the real Runtz seeds are available for sale, you can bet there’s about to be a whole lot more of this strain for sale. It wasn’t going to take long for other breeders to make their own version of the strain. Runtz genetics are easily available in Cali.

As somebody who lives in California, it’s funny to see many of my friends are tired of their street dealers telling them they have different strains of Runtz weed. I am lucky enough to have the Runtz team’s mutual friends and have the luxury of getting some of their latest strains before it even hit the market. Although you can grab the Runtz strain from other weed brands, it won’t necessarily have the same quality as the real deal. There is always a different strain trending in California.

I’ve seen outdoor versions of Runtz from unfamiliar brands trying to add huge premium price tags. At this point, other cannabis companies are trying to make money off the name of this popular California strain.

Not to say that you can’t find the Runtz strain from another cannabis company that has cultivated it to perfection. Therefore, if you want to try the real deal you will need to buy it through the actual brand. The Cookies brand has invested in the best breeders and cultivators that money can buy with Berners’ huge capital. The top shelf from the Cookies brand is typically chunky, dense, and frosty.

Every few years, there’s a new Cali strain that becomes popular/known on a global scale. Living in California for most of adult life, I was able to witness a few of these strains go viral. I’m sure you all know them…

I was lucky enough to get my hands on some Obama Runtz. The strain has some purple, too, and really reminded me of the regular Runtz weed. There is a joke up the logo on this Runtz bag associated with Yung Lbs’ new brand, in case you might notice. Nonetheless, the cannabis strain was fruity and super smooth in the backwood that I smoked. Unfortunately, the pack of cannabis I received did not have huge nugs, but they were still potent. The Runtz nugs found in the dispensaries are usually much bigger.

If you’re looking for a new sweet strain to try, you definitely need to give this strain a try! Already tried it? Let us know in the comments!