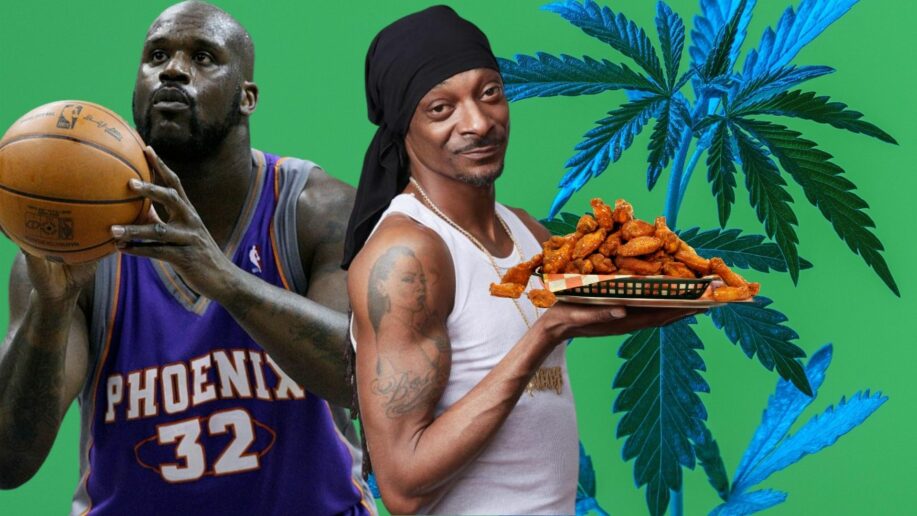 Do you like flats or drums? Lemon Pepper or honey garlic? Whatever your chicken wings preference, we can all agree that it ain’t no fun if the homies can’t have none.

Nobody knows that better than Snoop Dogg, Long Beach Poly’s most famous alumni, and arguably marijuana’s most prominent spokesperson. Fresh off his victory (depends on who you ask) in his Verzuz battle against DMX last week, Snoop is now competing on “The Wings Showdown,” a reality show built for getting high at home during a pandemic (not officially, but you know…).

• Why Does Snoop Dogg Microwave His Blunts and Should You Do It Too?
• Run The Jewels Release Their Own Cannabis Strain Called Ooh La La
• 9 Best Cannabis Cookbooks For THC-Infused Cuisine

The show pits celebrities like Snoop, Shaq, and Tyler Cameron – who the internet tells us is 6 foot 2 and was on the Bachelorette – against one another as they fight over who has the best chicken wings recipe – for charity.

According to Lawrence Longo, the CEO of “Off The Menu,” which is behind the show, “after reading [Snoop’s] cookbook From Crook to Cook, I knew I had to do something cool with him in the food space,” Longo said. “What’s really cool about Snoop’s involvement is that, for every wing sold, Off The Menu is donating a portion of the proceeds to Snoop’s Youth Football league.”

The rest of the celebrities, including Shaquille O’Neal, Jessie James Decker, Tyler Cameron, Tyra Banks, Haylie Duff, Anthony Anderson, Zac Posen, and Phil Heath, among others, will contribute their own dishes that viewers can sample from participating restaurants in their area, and then judge them online.

And if you don’t like Snoop or chicken wings but you’re somehow on this site, then you should know that the proceeds of the show will go to the Center for Policing Equity (CPE) in the name of the celebrity who gets the most votes.

But let’s talk about Snoop’s wings. They get a deep-cover coating in a batter with potato chips and are served with red ranch hot sauce at participating LA locations.

Let’s run that back. These are chicken wings that are dipped in a batter with potato chips and fried. With a spicy ranch sauce. Follow it with some gin, and bookend it with blunts, and you have a timeless recipe.

Now, who wants to compete with that?