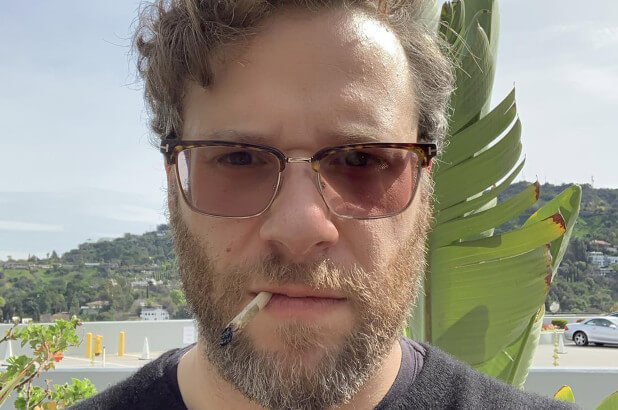 Who do you want on your team during a zombie apocalypse? I don’t know, but if there’s a pandemic and you like pottery and smoking tons of weed, you need to find a way to quarantine at Seth Rogen’s house.

In an appearance on Jimmy Kimmel’s recurring “Live From His House” segment, the comedian, filmmaker, and nation state-level marijuana consumer said he’s been spending the time by smoking “a truly ungodly amount of weed,” which he adds is “more than normal,” if it wasn’t clear.

Rogen added, “thank god it’s been declared an essential service because for me it is essential. I never felt that I willed a law into existence more than that.”

If you follow Seth Rogen on Instagram, you know that he’s become a big pottery enthusiast, making his own ashtrays, vases, flowerpots, large vases, and large flower pots. Rogen told Kimmel that he actually has three pottery wheels at his house and a kiln, and that he and his wife – actress Lauren Miller -have also found a place that delivers pottery clay even during pandemics.

Just a side note, it’s very easy to picture a stoner like Rogen – or any stoner – being able to kill a ton of time stoned out of their gourd spinning a pottery wheel and laughing.

The interview with Kimmel starts with Rogen talking about how he’s spending his time on quarantine before it becomes clear that it’s a pre-recorded message. Rogen stops the message and says he’s been “doing a lot of Zoom calls lately, realizing I don’t need to be there for them,” adding that “I gave a speech at a Bar Mitzvah last week and sold a pitch to paramount,” using the same method.

Rogen, who at times bears a striking resemblance to this author’s brother, said that on his 38th birthday the week earlier, his wife arranged a “drive-by waving” birthday party, during which his friends drove by and wished him happy birthday from his car.

“I’m more than happy to just go out and wave to my friends and speak to them for 15 seconds and go back about my business,” Rogan said, adding, “I’m really built for this.”

In 2019, Seth Rogen launched his own cannabis company, so really, one can assume he hasn’t had to worry about his supply much lately. He has also been a long-time icon of cannabis culture and has shared some great insights on weed, in particular during this Desus and Mero interview from last year.

Rogen and Miller don’t have any children, so this may be a good time to apply for adoption. Just make sure to find a place to hide whenever they reenact that pottery wheel scene from Ghost.