7 Reasons Why Scooby And Shaggy Are Definitely Potheads 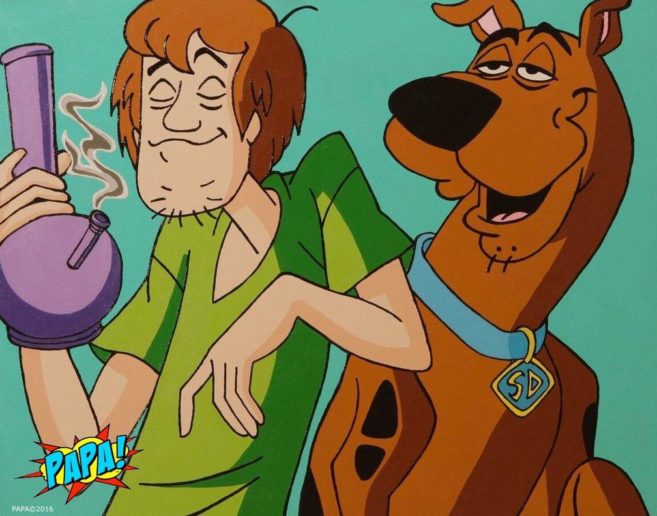 7 Reasons Why Scooby And Shaggy Are Definitely Potheads

Many of you probably already know this – there is a theory that Scooby and Shaggy are two huge potheads.

It’s all in theory, and we don’t want to ruin your childhood!

Anyway, you can always speculate. That’s why we came up with this list of reasons we are sure that it’s true.

You’ll remember that part of Shaggy and Scooby’s loveable quality is their never-ending appetite and willingness to do anything for food, especially their Scooby Snacks. They love food over everything.

It seems like a convenient excuse, but their large appetite may be due to something else. We all know the munchies; huge cravings induced by weed are one of the well-known effects of getting high. THC stimulates our appetite.

It’s also why Shaggy’s food cravings are a bit… odd. From an extra cheese pizza with pickles in Scooby-Doo! Abracadabra-Doo to chocolate-covered hot dogs and liverwurst, the show says it is due to Shaggy receiving a garbage disposal unit as a toy when he was younger.

Fun fact: The authors Tracie Egan Morrissey and Rich Juzwiak claim that when people get high and do not prepare their snacks ahead of time, stoners find whatever food they can, which includes making up weird food combinations or substitutes.

The theory that Shaggy is a stoner has been around as early as 2002 when director Raja Gosnell took that subtext and planned to hint at it throughout the live-action film Scooby-Doo. Newsweek and Entertainment Weekly shot several scenes as a running gag referencing his weed use, but those scenes were cut from the final film to make it more family-friendly.

However, one scene remained, which may have been a bit inappropriate for its PG-13 rating. When Shaggy, Scooby, and the rest of the Mystery, Inc. gang take an airplane to Spooky Island, Shaggy meets and instantly falls in love with a girl named (surprise, surprise). It seems like an innocent coincidence until you hear the rest of the dialogue.

“I’m Mary Jane,” she introduces herself. Shaggy then has a look on his face and exclaims, “Like, that is my favorite name!”

Shaggy’s personality is that of a cowardly, absentminded, and goofy dude. You can’t deny that his character is very loveable, though. But the reason why fans speculate on his weed habits is also due to his personality and how it matches people’s behavior under the influence of holy herb.

Shaggy often overlooks the ghoul in the room for someone so afraid of ghosts until it moves or screams. He tends to space out, and when it’s time for them to run, he and Scooby are often slow to respond. Scooby and Shaggy tend to laugh and act giddy for the slightest reason when they’re not looking for ghosts. It could just be part of their character, but their personality would easily be explained away when you consider they might be under the influence.

From the van to his appearance, Shaggy was most likely modeled after the stereotypical hippie stoner stereotype in the ‘70s. They couldn’t show him smoking explicitly on a kids’ show, but they could use direct references that only adults would understand.

Shaggy was always unkempt (hence, the name “Shaggy”), caring very little about hygiene or facial hair. He was always talking about food or the munchies, and he constantly rambles, both at high and low speeds.

As for the van, it originally belonged to Fred, who was almost always seen as the one driving the Mystery Machine. However, in Scooby-Doo and Scrappy-Doo, Fred supposedly gave his van to Shaggy, who solved mysteries with Scooby and Scrappy. The series took place in the late 1970s. The idea of a stoner like Shaggy driving a windowless van decorated in the flower-power theme of hippies and weed only drives the theory deeper.

As those familiar with the show already know, Shaggy is the lanky, cowardly friend of Fred, Velma, and Daphne, who spends most of his time with his pet dog, Scooby. But this seemingly run-of-the-mill setup has been linked to various darker theories.

One of them is that Shaggy was born into a wealthy family with abundant drugs, particularly cannabis. He was said to be regularly picked on by his three companions, so he was more comfortable confiding in Scooby.

What makes this theory a lot grimmer is that Scooby is believed to have passed away a long time ago and is merely a product of Shaggy’s hallucinations. Add to that the notion that he can talk to his (supposedly deceased) pet dog. It only creates more room for speculation.

Apart from the fact that he is the most easily scared, another glaring difference between Shaggy and the rest of the bunch is his physical appearance. While Velma, Fred, and Daphne are portrayed as established-looking adults, Shaggy, on the other hand, is featured as a more laid-back yet unkempt version of the other three.

Because of Shaggy’s messy hairstyle, baggy clothes, and constant paranoia, fans have formulated the theory that he could be stoned all the time. After all, the cartoon came into existence in 1969, as the world was ushering in the famous “Flower Power” era.

Of course, the cartoon itself also showed portrayals of Shaggy, Scooby, and the gang with various allusions to cannabis smoke.
“We’re lost in the fog.” Yeah right.

What about the “Scoobie ‘Doobie’ Doo” expression?

A dog who talks, whose best friend has all those ‘characteristics’ if it’s not, and hallucinations Scoobie Doo stoner too!

As Shaggy, the cartoonists can’t draw Scooby-Doo smoking weed, but you can conclude that Shaggy and Scooby-Doo smoke a lot of weed in the back of that van.