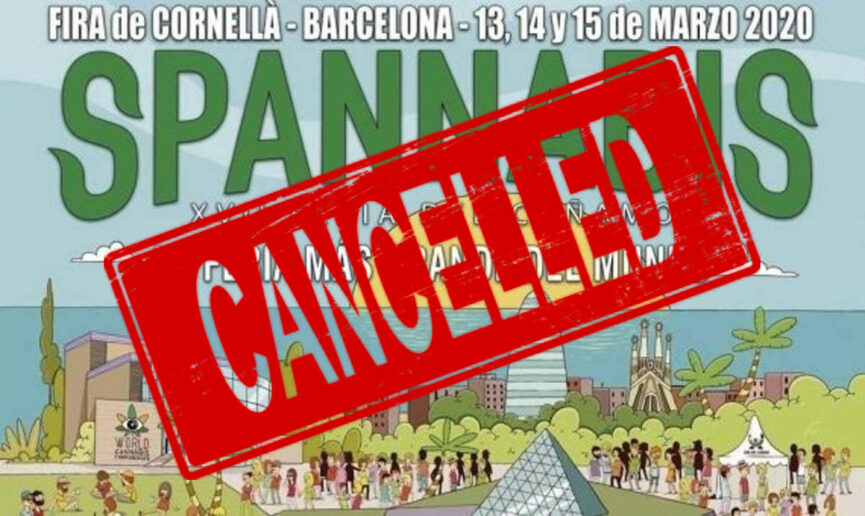 Spannabis, the biggest cannabis event and trade show in Europe, was shut down less than two days before the convention’s doors were slated to open for attendees.

The cancellation was first made public by Robert Carroll, an exhibitor at Spannabis, in a Facebook live. According to Carroll, Spanish authorities came to the event hall and told organizers they would have to shut down.

• How to Get High Without Dying from Coronavirus

• Move Over Toothpaste, Cannabis Is Better at Keeping Your Teeth Healthy

Shortly after Carroll’s post, the Spannabis website featured a cryptic note announcing the convention had been postponed.

“SPANNABIS IS POSTPONED VERY SOON WE WILL INFORM YOU,” the note reads.

In an email to press pass holders, a representative of Feria del Cáñamo SL, the company organizing Spannabis, said: “As you may know, this morning, the President of the Generalitat of Catalunya, Quim Torra, the Councilor of Health, Alba Vergés, and the Councilor of Interior, Miquel Buch, announced extraordinary measures to respond to Covid-19 coronavirus disease.” 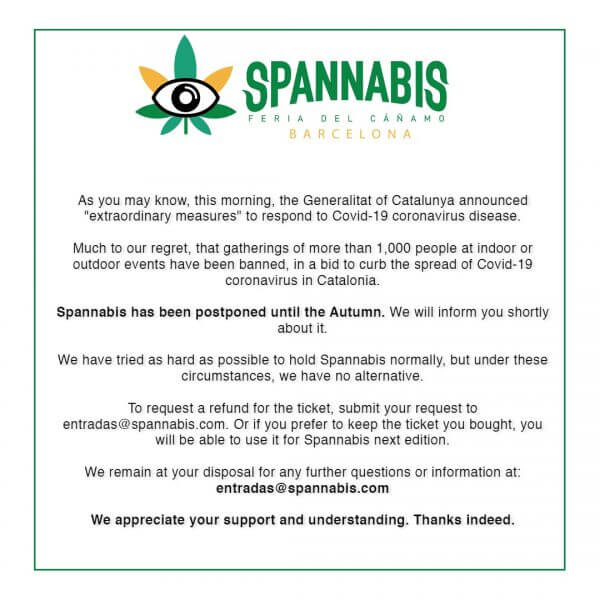 “Much to our regret, that gatherings of more than 1,000 people at indoor or outdoor events have been banned, in a bid to curb the spread of Covid-19 coronavirus in Catalonia.”

Rumors about the event’s cancellation first began making the rounds last week after other events in Spain and Europe were forced to cancel due to the current Coronavirus outbreak.

The even organizers vehemently denied all rumors, stressing that the event would take place as planned.

Just a week before Spannabis’ scheduled start, the organizers said that “for now, the Spanish health authorities and the government  have declared that there is no reason to cancel events and recommend a normal life, therefore, we don’t find any case of force majeure and Spannabis will be celebrated as planned.”

That statement stands in stark contrast to an announcement by the organizers of the Mobile World Congress a month earlier. Slated to take place late February, the event’s organizers canceled the event “over the global concern regarding the coronavirus outbreak.”

Spannabis’ vehement insistence to hold the event despite numerous exhibitors pulling out in recent days, stoked rumors that the convention had no event insurance in place.

Colin Gordon, the found of Ethos Genetics even wrote on Facebook that the event’s organizers threatened they would not be able to return for Spannabis 2021 should they cancel their participation now.

Hundreds of exhibitors are now left with packing up their booths and return home with nothing more than several thousand dollars less in their pockets.

No doubt, for a number of smaller companies, this will likely be money they couldn’t afford to lose. To say people are pissed would be an understatement. According to posts on Facebook, around 40 exhibitors have already banded to sue the Spannabis organizer over their handling of this very foreseeable cancelation.

Feria del Cáñamo SL has shown some odd behavior in the past as well. Just earlier this year, the company got into a public spat with High Times, after the magazine announced a Spannabis edition of its famous High Times Cup.

At the time, the company issued a lengthy statement denying any and all connection to High Times, along with a point-by-point rebuttal of the magazine’s announcement that it would be holding a cannabis competition as part of the conference, the largest annual cannabis event in Europe.

“We want to deny all this information. There is no relationship or collaboration between Spannabis and High Times,” Spannabis organizers stated, adding that such use of the Spannaibs image, logo, brand or name, could lead to legal action.