The Legal Status of Weed in Jamaica - International Highlife 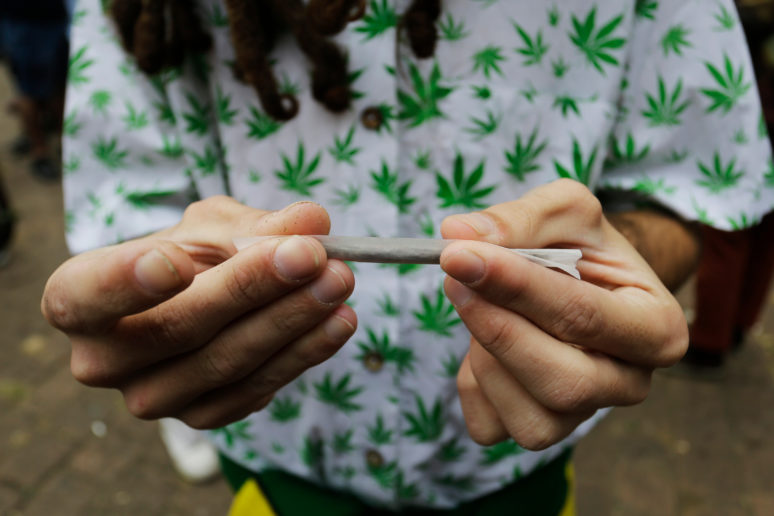 When you think of Jamaica, a few things probably come to mind: Bob Marley, bobsled teams, and of course, world-famous weed.

Jamaica is known worldwide for its high-quality weed, which is linked closely to the Rastafarian religion and culture. But is it legal to smoke weed in Jamaica?

The straight answer is no, it’s not. The longer answer is yes, weed is legal in Jamaica under certain circumstances, and to understand them we need to look at their history of cannabis legislation.

A Brief Overview of Weed in Jamaica

The thought of kicking back on a beach in Jamaica and passing around some local ganja seems like a fantastic dream. But, until 2015 it was very much just a dream for most (legally speaking of course).

Weed was considered illegal until 2015 in Jamaica until an amendment to the Dangerous Drugs Act was passed by the Jamaican government and possession of cannabis was decriminalized.

What does that mean?

Today you can have up to 56.6 grams (2 ounces) of cannabis on your person in Jamaica. It’s for personal use only, but even with this much weed, you will not be arrested or see any prison time.

It’s similar to a speeding ticket. If you’re caught speeding, you will have to pay a fine. But if police catch you speeding excessively, you’re probably going to jail.

You will still have to pay a fine of 500 Jamaican dollars if caught holding or smoking weed in public. That roughly equals around five dollars USD.

Although it’s a crime to smoke in public, including cigarettes, there is a little more to the amendment that allows two groups of people to smoke weed legally.

The Jamaican government allows its citizens to smoke weed for religious sacramental purposes. This refers solely to citizens who are of the Rastafari religion.

Another bonus of being a Jamaican citizen is that they can now grow up to five plants for personal use. This is handy now that smoking weed in private residences is legal.

Now, don’t worry if you don’t fall into that category, as there is one more category that will allow you to sample some local Jamaican ganja.

Similar to the laws we saw in California before it became legal to smoke weed in the “Golden State,” medical marijuana is legal in Jamaica.

The system used by Jamaica to legalize medical marijuana is very similar to others that have gone through this process before them.

Under the Jamaican Ministry of Health, the Cannabis Licensing Authority (CLA) helped create the rules and regulations to establish medical cannabis dispensaries.

This process allowed the CLA to distribute licenses for medical marijuana dispensaries, cultivators, and manufacturing and processing facilities. Once in place, this resulted in the first dispensary opening in 2018.

Surprisingly, with all the licensing and regulations that are needed to open up a weed dispensary in Jamaica, the qualifying conditions to gain a medical marijuana card are pretty open.

Get a Jamaican Medical Marijuana Card

To be able to buy from a medical dispensary, you must first visit a doctor or other healthcare provider. They will then recommend a medical marijuana card for a small fee of $10 USD.

As mentioned, the Jamaican government is very open to what conditions qualify someone for a medical marijuana card. Therefore, there is no need to feel nervous if you decide to visit a professional for a card.

The main recommendations are for mild anxiety, nausea, or insomnia. One thing to be aware of is that the minimum legal age for a card is 18. You must show a government-issued ID.

It’s up to the qualified practitioner to recommend medical or therapeutic marijuana. So, don’t worry if they recommend it for something else.

Sounds pretty simple, yeah? Well, there is a little homework for you to do before you walk into the first medical practitioner or health care provider you see.

To legally recommend medical or therapeutic cannabis, the provider must be licensed by the Medical Council of Jamaica. Or approved by the Ministry of Health to prescribe medical cannabis.

Can Tourists Buy Weed in Jamaica?

We’ve talked about the history of weed in Jamaica, the now amended legislation, and how to get a medical marijuana card.

The new legislation states that anyone over the age of 18 is legally allowed to consult a qualified physician to receive a medical marijuana recommendation.

This includes all tourists visiting Jamaica. There is also one extra exemption that falls into the medical marijuana category. It might save you a lot of time during your holiday. Registered medical marijuana patients from other countries are allowed to buy medical or therapeutic marijuana using their registered licenses.

Once a dream for some, tasting the finest ganja in the world has now become a reality for tourists from all over.

Where to Buy Weed in Jamaica

So, now that you know you can legally buy weed in Jamaica. The next thing to do is find out is where you can buy it.

Without a doubt, you will be offered weed on the street at some point. This is a red flag. It is not legal to sell weed privately in Jamaica, so do not purchase from these sources.

There are plenty of cannabis dispensaries and herb houses in Jamaica that provide a safe and, even more critical, legal environment for you to purchase from.

It has a similar feel if you have ever purchased weed in North America. The service is of high quality, and the shops give a boutique-style feel, with helpful budtenders to guide you.

It is still illegal to smoke in public in Jamaica, which also goes for cigarettes. Fortunately, the dispensaries and herb houses offer designated rooms to enjoy your Jamaican weed.

Enjoy Jamaican Ganja on Your Next Holiday

Jamaica has come a long way when it comes to the legal use of marijuana. You are not allowed to smoke weed recreationally or light up in public, but, you can access medical cannabis.

As long as you respect the rules and regulations set in place, there is no reason why you can’t enjoy some of Jamaica’s most delicious herb on your next visit to the Caribbean.