Cannabis and Pregnancy: Is it Safe for Mothers and Babies? 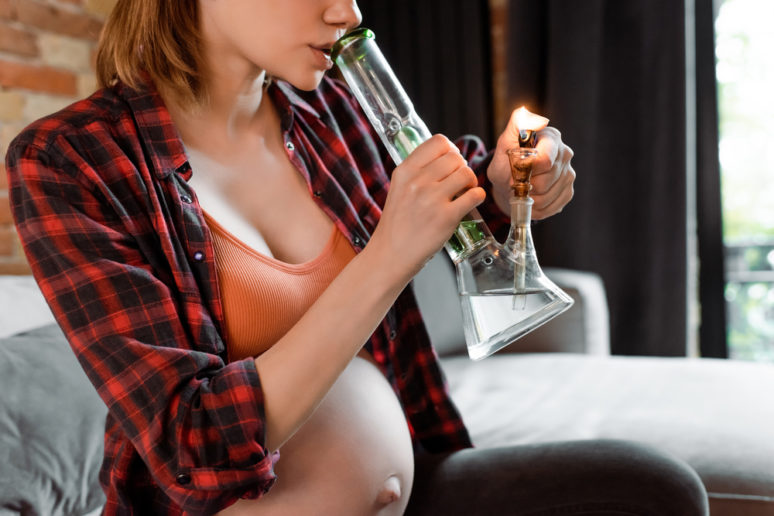 Is It Safe To Consume Cannabis During Pregnancy?

Is it safe to use cannabisduring pregnancy? The short answer is: we don’t totally know yet but we’re leaning towards yes.

This isn’t to suggest that marijuana isn’t being used by pregnant women all around the world. This is a brief overview of some of the issues surrounding cannabis and the big question as to whether it’s safe to consume marijuana during pregnancy.

Marijuana and Pregnancy – An overview of the Issue

For decades, knowledge has been available about the harms of drinking alcohol and smoking cigarettes for mothers during pregnancy, with fetal alcohol syndrome and low birth weights and other health problems being some of the respective outcomes. As such, when a woman becomes pregnant, there is enough general knowledge as well as formal research to inform her of the dangers of alcohol and cigarettes during pregnancy to allow her an informed decision.

On the contrary, women who are regular cannabis users and become pregnant don’t have the resources available in terms of research and information on cannabis and pregnancy that will tell them whether cannabis is harmful to their unborn child.

Here is where it becomes an issue for mothers: Many mothers aren’t comfortable with the idea of taking pharmaceutical prescriptions or over-the-counter drugs to deal with the physical challenges of pregnancy. Those who are familiar with cannabis and have perhaps used it in the past medicinally or recreationally may find that they’d prefer cannabis to pharmaceutical medications, but are faced with two big issues: lack of knowledge and stigma.

Common Problems for Women in Pregnancy

There is no doubt that growing a whole human in your own body is one of the most incredible feats a woman could accomplish, but that doesn’t mean the gestation process doesn’t take a toll on women’s bodies.

Here are a few common discomforts experienced by pregnant women:

While a lot of women say that pregnancy is one of the most special times in their lives as women, it’s not always a walk in the park with a woman’s body going through so many changes. For a lot of women as well, especially first-time expecting mothers, they may feel very anxious as they prepare for their big life change and go through all the doubts all new parents go through over their abilities to raise happy and healthy children.

Looking into the Hype

Late in 2016, there was a bit of a public outcry against cannabis and pregnancy when a doctor, Dr. Nora Valkow, from the U.S. National Institute on Drug Abuse (NIDA) came out with advice for mothers-to-be to avoid cannabis during pregnancy.

According to Valkow, more women are turning to marijuana in their earlier pregnancy terms to deal with nausea and morning sickness. Many mothers admit that their choice of cannabis for nausea over other pharmaceutical solutions is due to their efforts to avoid the perceived harms of pharmaceutical products on fetuses.

A Bold Statement Against Cannabis and Pregnancy

Valkow’s statement about cannabis and pregnancy, which was originally issued in The Journal of the American Medical Association was pretty conclusive as it advised against cannabis use for pregnancy nausea, and pretty much any other discomfort associated with pregnancy as well.

Valkow elaborated to say that all the studies that examined cannabis and motherhood showed results of anemia, low birth weight, and future memory, learning, attention, and behavioral differences.

Dr. Valkow’s claim against using cannabis in pregnancy doesn’t hold up when you look at her claims with knowledge of research and data analysis.

While Dr. Valkow’s stance claims to be scientific by citing studies and previous conclusions about cannabis, most of the studies she looks at studied tobacco use along with cannabis, which means that when studies looked at cannabis use, the methodology did not isolate tobacco and cannabis users for a control group.

Dr. Valkow’s claims, and the subsequent news that followed it, highlights the bias that exists when producing research about cannabis that people should be aware of. For instance, Valkow is a member of the NIDA, the National Institute on Drug Abuse, which takes an anti-marijuana, anti-drug stance, and naturally, this was evident in her medical advice that appeared within the American peer-reviewed medical publication.

Other countries around the world are taking a stand and doing research on cannabis and the neonatal health experience of women who smoke marijuana in Jamaica, the study recognizing that Jamaica is a “heavy-marijuana using population”.

When you look at how cannabis has been treated at the federal level in the United States, for example, it’s evident that Attorney General Jeff Sessions and his comrades haven’t made any moves towards federal legalization, often citing that they need more research to scientifically understand cannabis.

Sessions is correct in that we need more research for cannabis, the research community has been calling for it for years. The frustrating thing about Sessions is that it seems he is roadblocking applications to the Drug Enforcement Administration (DEA) by researchers seeking permission to actively study marijuana. There are literally dozens of applications existing right now that haven’t been “approved or denied” with it being attributed to the U.S. Justice Department not giving the required green light to do so.

How can federal legalization move forward if they won’t even allow cannabis to be legally researched by talented and eager scientists who can easily show the benefits of cannabis for all types of health issues and publish them in peer-reviewed journals? It’s quite the conundrum.

Luckily, through state nullification, individual states are modeling the way for cannabis legalization and are not necessarily waiting for the research world to catch up to knowing the benefits of cannabis for many people in this world.

The cannabis movement often cites the lack of official research into cannabis as one of the biggest barriers to promoting cannabis as a part of a healthy lifestyle, including in pregnancy.

Pregnant mothers who use cannabis will tell those who ask that they also found the lack of research frustrating in their decision to use cannabis. They often relied on talking to other mothers in their community of friends and other circles about their experiences using cannabis as a pregnant woman.

With motherhood being a very contentious issue, no matter which way you look at it, mothers often fall victim to harsh judgment about what they do as a mother. This causes a lot of mothers and pregnant women to conceal their cannabis use for fear of being stigmatized as lazy, unproductive or wanting to escape reality.

When CannaWrite has talked to mothers about cannabis and pregnancy, they express wishes that they could be more open with others about their use of cannabis in pregnancy and motherhood, as they know their experiences can help others.

Mothers express a desire and a wish for a change of image towards the cannabis user so that they don’t fall victim to false stereotypes or are criticized for putting their children in danger. It’s not often that you see a mother smoking a joint portrayed, but yet it’s all too common for alcohol to be glamorized in all aspects of life, including motherhood.

All mothers CannaWrite has spoken to who used cannabis during pregnancy report that their children are happy, healthy and often-times advanced in their growth milestones. As cannabis legalizes, it will be essential that more mothers emerge to share their stories of how cannabis has affected their lives and has made them better parents and overall better versions of themselves.

What All Society Can Do

No matter what way you look at it, even if the cannabis community knows that cannabis is not a harmful substance, it’s imperative that we continue to call for an increased scientific knowledge towards cannabis so that we can spread information towards global legalization.

Even a Harvard Scientist stated, after reviewing over 10,000 studies that mentioned cannabis, that “much of the current body of evidence does not provide any clear guidelines regarding populations that may benefit or be harmed by marijuana, or on the effects of different dosages and delivery mechanisms.”

All individuals, including expecting mothers, deserve to be able to see that significant knowledge and funding has been placed into understanding different aspects of women’s health, including how cannabis can contribute to an overall healthy lifestyle.

11 responses to “Is It Safe To Consume Cannabis During Pregnancy?”