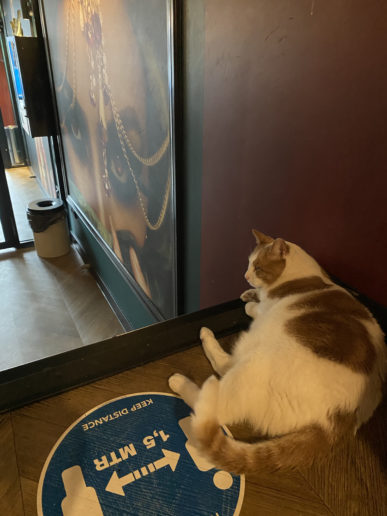 Rizla the famous coffeeshop cat passes away at 18 years old

Rizla was not feeling well the past week and was not eating, Larby informed his following on social media a week ago. People from all over the world showed their support and even despite hundreds of get well wishes. Rizla passed away from old age at 18 years this Saturday first of October.

Rizla became well known around the world with cannabis enthusiasts that visit the Eerste Hulp Coffeeshop in Amsterdam. Rizzla could always be found roaming the coffeeshop. Laying around, enjoying the never-ending attention and pets from the hoards of tourists that visited the Eerste Hulp for almost two decades.

Larby, the Eerste Hulp’s owner, built up quite the following over the years on Instagram and Facebook. Next to pictures of cannabis and especially hash he also shared pictures of Rizzla the coffeeshop cat. People from all over the world came over specially to meet him while visiting Amsterdam. Rizla loved hanging around all the cannabis puffing tourists in the Moroccan themed coffeeshop.

We have met Rizla numerous times over the years visiting the Eerste Hulp coffeeshop. A few years back I even helped look for him when he went on an adventure in Amsterdam. He was luckily found a few days after he was missing. This time Rizla is on an adventure forever but always will be remembered and lives on in our hearts.