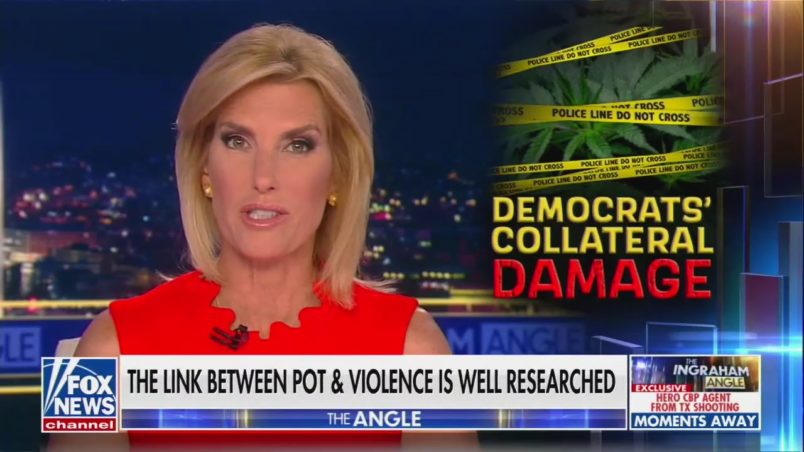 Laura Ingraham doesn’t think it’s lax gun laws that are contributing to the regular mass shootings happening in this country, but rather, the expanded legalization of cannabis.

Yesterday the Fox News host suggested that weed is actually a driving factor behind the mental state of mass shooters.

During “The Ingraham Angle”, the host brought on Dr. Russell Kaymer, who is the medical director of partners and safety, to question why people aren’t “talking more about the pot psychosis-violent behavior connection.”

“This is something that the medical community is well aware of. Yet, you get the sense that the billions of dollars on the line are more important than our kids,” Ingraham said seriously. “And what’s happening especially to young men in the United States, who are frequent users of this high-potency THC that’s now in marijuana products sold legally in dispensaries across the United States. I mean, this at the very least needs a serious national conversation.”

Ingraham added that politicians should be working to stop legalizing marijuana, rather than trying to enact common-sense gun laws and make weapons harder for people to access.

“And yet people like Beto [O’Rourke] — and I’m not trying to drag you in a political conversation, Dr. Kaymer — but they’re fine with going in and do a run on the guns,” she added. “And I guess you can argue that, if that’s what you want to do, try to get rid of the Second Amendment, but yeah, completely oblivious to what legalization of marijuana has done and is doing to an entire generation of Americans with violent consequences.”

In the hours following her segment, the term “reefer madness” began trending, with many Twitter users mocking Ingraham for trying to suggest the link between marijuana and violence. “Reefer Madness” is a propaganda film from 1936 that centers around an insane series of events that occur when a group of high schoolers trying smoking weed — including a hit-and-run accident, manslaughter, suicide, conspiracy to murder, attempted rape, hallucinations, and descent into insanity.

“The 1930s called; they want their reefer madness propaganda back,” one person tweeted. Another joked, “I didn’t think anyone would honestly circle around to that bulls— ever again….but it is funny to watch someone try.”