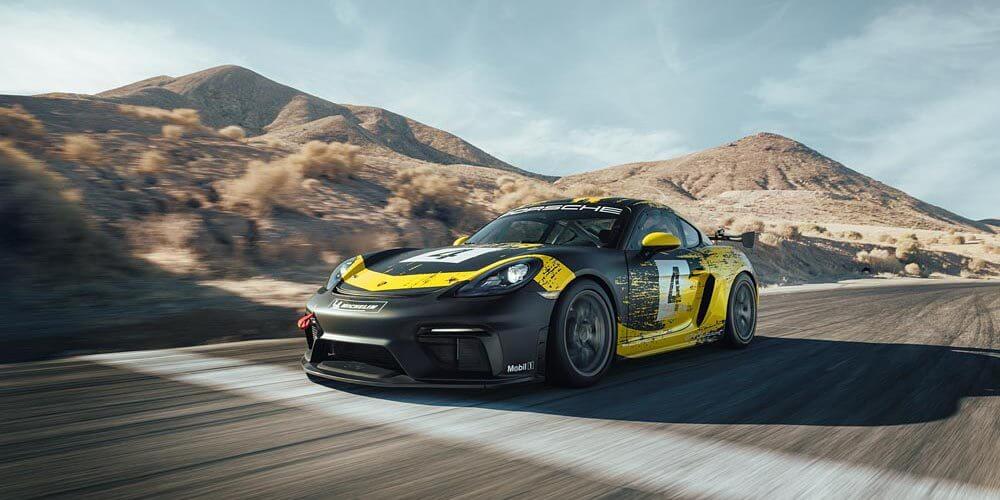 I never wanted a Porsche….until yesterday. On Thursday, Porsche revealed the follow-up to the Cayman GT4 racer. Porsche not only made it faster but also more sustainable.

The material is a little weaker than carbon fiber and can take on water and swell, but is much better for the planet and is still very strong.

The power all goes to the back wheels through a diff locker, so dirty power slides shouldn’t be an issue if you’re avoiding the rain because you’re afraid your body panels will swell.

To slow you down, the 718 GT4 has 380 mm discs all around (those are 15% bigger than the road car’s). And to keep you in your seat under hard braking, it has a six-point harness.

You also get an 80-liter fuel cell, a handheld fire extinguisher, a rescue hatch in the roof, and ABS ESC and TC can all be turned off if you’re so inclined.

Those features are all standard on the entry-level Clubsport, but if you’re looking for more than a track day toy, you can pick the Competition model, which comes with all of the above plus adjustable shocks, an extra 30 liters of fuel, adjustable brake bias, an integrated air jack system, a quick-release steering wheel, automatic fire extinguishing, and more.

The new Porsche 718 Cayman GT4 Clubsport possesses significantly more racing genes than its successful predecessor. The power of the engine has increased considerably. At the same time, we were able to increase the downforce and cockpit is now even better suited to drivers’ needs, says Fritz Enzinger, Porsche’s head of motorsport.

And Enzinger isn’t kidding about the car’s success. More than 400 of these old GT4s are racing around the world, and with this new hemp Porsche expects to sell even more than 420.

Both the Clubsport and the Competition can be ordered right now and deliveries will begin in February, according to Porsche. Neither is road-legal.