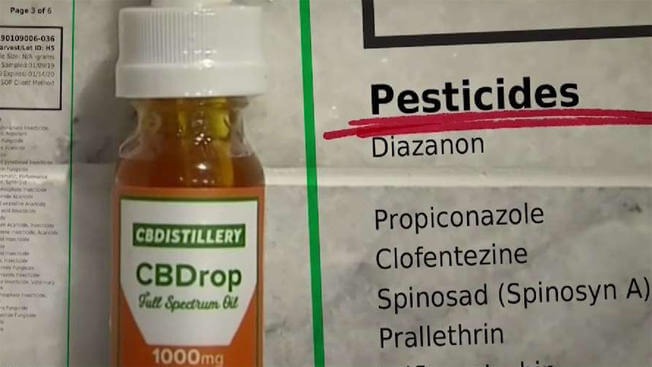 Recently, NBC New York decided to test dozens of CBD products to learn what’s behind the label. Currently, CBD products are still unregulated and unmonitored by the Food and Drug Administration.

The I-Team wanted to know: are you getting what you’re promised on the labels?

They tested three brands of CBD oil and four brands of gummies. To conduct the test, they purchased five samples of each brand and the results were astounding.

The I-Team spoke with Chris Martinez, owner of Evio Labs in Miami, Florida.

Martinez told the I-Team, when he reviewed the results of our lab report. That report revealed that two of the brands of oils tested had samples rejected by the lab because they do not meet California standards for quality control.

The brand Lazarus Naturals was flagged by Evio Labs because it’s sample contained dangerous amounts of lead according to FDA standards.

It had four times the amount of lead than what is approved. If a child gets their hands on these products, it could be life-threatening,

NBC 4 New York purchased the Lazarus Naturals sample from an independent seller off Groupon. However, Lazarus Naturals said they couldn’t verify that the sample is of their product since they have experienced a problem with counterfeit products sold on unapproved marketplaces.

One sample they purchased from CBDistillery contained two pesticides, one of the two exceeds California’s acceptable standards. A company spokesperson told NBC 4 New York that the batch in question was tested by “an accredited third-party lab,” and the amounts of pesticides detected passed those laboratory standards.

Turns out, that was not the case, according to the test results.

Less than half of the samples that were tested actually had the stated amount of CBD inside the product.

The lab test showed every sample contained less than half of the advertised amount on the packaging. The company did not respond to our requests for comment.

It’s not uncommon to see these inconsistencies across the board,

As for the gummies tested, only one of the brands, Green Roads, contained the amount advertised on the packaging.

When they reached out to the company for comment they told the I-Team they couldn’t verify the testing results. They said that the gummies were made the old way by, “sprinkling CBD on them.” Now, the company “infuses the CBD hemp extract into the gummies.”

Another brand purchased online, Gold Line, had similar findings. Results show they have less than half of the amount advertised on their website at the time of purchase. When they reached out to the company for their response they told them that they put the “wrong photo” online. They called it an “innocent mistake” and removed the product from the website.

The biggest difference was in gummies purchased from a surgery recovery website called, Dani’s Doll House. They claim to be the “strongest” CBD gummies that can help “speed up your recovery.”

All give of those samples had zero CBD in them,

The owner of the website told the I-Team that they purchase the gummies from a distributor and then apply their own label. She said in an email follow up, she is “going to try to get to the bottom of this.”

Until there is some type of regulation that levels off the playing field, patients are being duped into buying products that aren’t really going to benefit them,

We are sure that this is a wake-up call for many CBD consumers. Make sure to get your CBD from a legit source that has all its products tested by an independent lab.