Dispensary Employee Fights off Three Thiefs With a Glass Bong 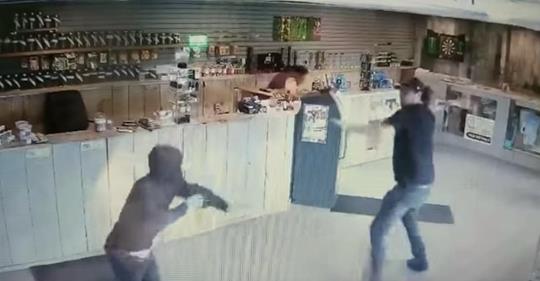 Canadian police are currently investigating an aggravated burglary and robbery attempt at a cannabis dispensary in Ontario on September 6. Four men entered the Recreational Cannabis Farmers Market in Shannonville before being fended off by a dispensary worker.  The owner battled through the spray and objects with a large glass bong, ultimately backing them out of the door. Tyendinaga Police are still seeking any information and leads about the incident. The burglars were last spotted heading west on Old Highway 2 in a white SUV.

Dispensary Employee Backs Down Burglars With a Bong

Security footage captured from the scene of the burglary is incredible. Two dispensary workers are standing behind the counter when three men wearing black hoodies, masks, and rubber gloves dash into the retail area. The leader lets fly a thick burst of bear spray, a highly concentrated pepper spray used to fend off bear attacks. The puff of red spray hits both workers square in the face as they duck behind the counter.

Rright as the burglars try to make their move, one of the employees jumps from behind the counter wielding a three-feet long glass bong. From the looks of it, the bong is the largest object the worker could get his hands on.

The three burglars in the video immediately start to retreat toward the door, while the worker advances toward them through more clouds of pungent bear spray. At this point, the whole scene is reminiscent of Act 1 of 2001: A Space Odyssey. Blind and enraged, the worker swings the bong around, backing the burglars to the front door.

A few seconds later, the worker has the burglars in full retreat. In a last ditch effort to reverse the situation, one of the burglars tosses a blue recycling tote at the store worker. Before he does, though, there’s this amazing moment where the worker pauses and drops the bong to his side, as if to say “really?” as the tote flies clumsily over his left shoulder.

Out of options, the burglars finally flee out the door, with the worker advancing upon them. At the last second, the worker swings the bong like a lead pipe, smashing it against something or someone and hurling glass shards everywhere. Locking the door behind the defeated burglars, the worker shouts for his co-worker to call the Police—or to call someone named “Pete”.

The video of the attempted robbery and the dispensary worker’s brave stand is already going viral, you can check it out yourself: