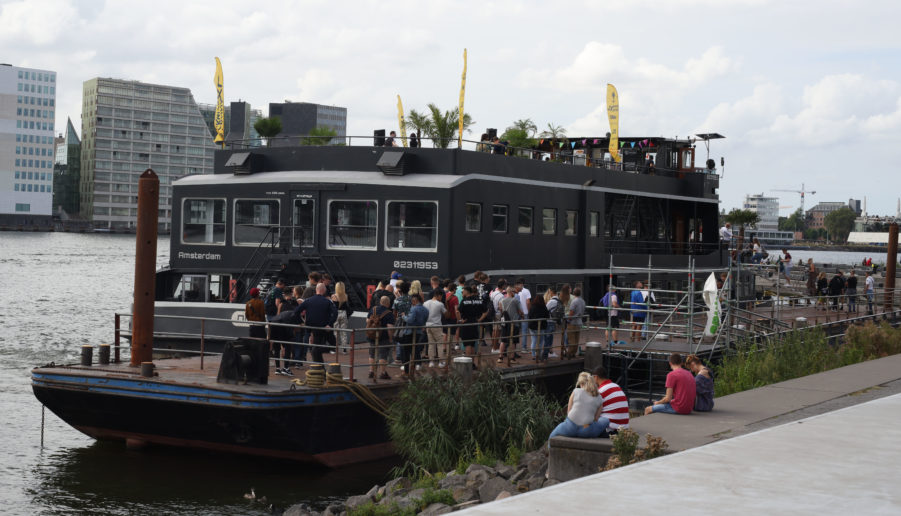 The 21 of August was the second time the Cannacruise XXL in Amsterdam was held. An event for people in the cannabis industry and cannabis enthusiasts alike. The 2022 edition was sold out and set sail from the IJ side of the ferry behind Amsterdam Central. The boat was packed and the smell of cannabis was in the air. We set sail for a trip around Amsterdam after everyone boarded the boat.

After most people got a seat and started rolling up the crew started telling people they couldn’t smoke inside. Which made everyone shift to a spot outside on the sides and roof of the boat. Where a DJ and music were playing. The consumptions were expensive and were purchased by tokens that cost 3.50 each. A small plastic cup of beer or soda could be ordered with one token. Food options were limited, for 8 euros you were able to get a very basic hamburger that had to be paid in cash. People who got a VIP ticket got a goodie bag containing the usual stuff. Things like a grinder, papers some filter tips a pin, and some stickers together with a small bag of CBD cannabis.

On the first floor, there were a few stands where brands like Marley Natural showed their products and were giving out information. The middle deck contained bar and seating areas. After a few hours on the water, the event came to an end and the boat full of high people arrived back at the dock.