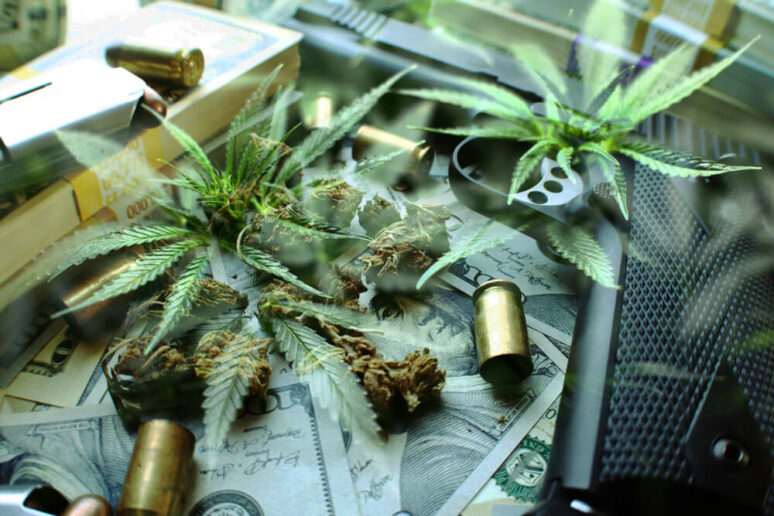 Let’s take a look at Florida; Since legalizing medical cannabis in 2016, Florida’s Amendment 2 has seen quite a few legal roadblocks.

Now many residents are realizing how the Constitution’s second amendment may be clashing with Florida’s relatively new amendment.

For Florida’s more than 200,000 medical marijuana patients, the issue is of special concern since the state currently has the highest number of concealed weapons permit-holders in the country at 2,008,841.

Here’s a look at the state’s population of concealed firearm permit holders and registered medical marijuana patients. Florida’s total population, as of July 10 is 21,299,325. Hover over the rings to see the data.

A medical cannabis card flags gun buyers as federally unlawful users of a controlled substance at the federal level on the Firearms Transaction Record, also known as Form 4473, which under federal law must be completed before the purchase of a firearm can take place.

The form asks, “Are you an unlawful user of, or addicted to, marijuana or any depressant, stimulant, or any other controlled substance?”

Even with medical cannabis now legalized in 33 states as well as the District of Columbia, in January 2017 the following message was added in bold to the packaging of the cannabis:

Warning: The use or possession of marijuana remains unlawful under federal law regardless if it has been legalized or decriminalized for medicinal or recreational purposes in the state where you reside.

A “yes” on the Firearms Transaction Record results in an automatic denial of the federally protected right to purchase a gun from a licensed dealer.

Lawsuits have been filed across the country claiming the rule violates the Second Amendment.

In 2016, the U.S. Ninth Circuit Court of Appeals upheld the federal ban, ruling that any evidence that medical marijuana cardholders are less likely to commit crimes is “not sufficient to overcome Congress’s reasonable conclusion that the use of such drugs raises the risk of irrational or unpredictable behavior with which gun use should not be associated.”

That ruling applies to the nine Western states under the court’s jurisdiction.

Many veterans’ groups across the country are preparing to fight similar conflicts, however, no such lawsuits have arisen in Florida since Florida Agriculture Commissioner Nikki Fried took office in January.