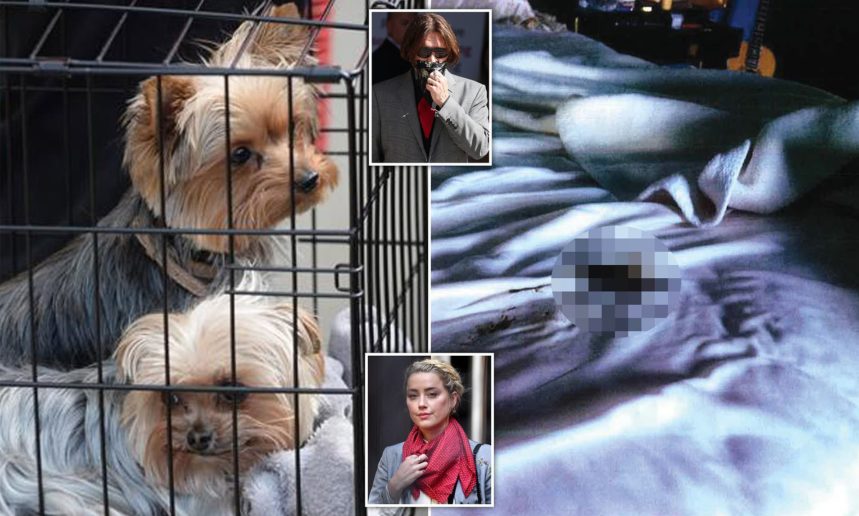 This week the trial continued and Amber Heard has denied claims she shit in Johnny Depp’s bed.

Depp is suing Heard for $50 million following a December 2018 op-ed in the Washington Post in which she seemingly accused him of domestic abuse, despite not naming him. She then countersued the actor for $100 million.

As the defamation trial continued Monday following a weeklong break, Heard was asked about claims she’d told Depp’s driver Starling Jenkins that she was involved in a prank gone wrong.

Heard told the judge how she’d left their two dogs, Pistol and Boo, in the bed while she and her friend packed to go to Coachella.

“[Boo] had eaten Johnny‘s weed when she was a puppy and had bowel control issues for her entire life,” Heard explained, saying that they regularly had to take her to the vet.

Heard also said they would have to leave the dog in bed because she would go to the bathroom almost immediately after you’d put her down on the floor, adding that it would sometimes happen in the bed.

She insisted when asked whether she’d committed any kind of “prank,” “Absolutely not. Absolutely not. First of all, I don’t think that’s funny. I don’t know what a grown woman does. I was not in a pranking mood. My life was falling apart.”

Heard added, “I had just been attacked on my 30th birthday… it was not really a jovial time and I don’t think that’s funny, period. That’s disgusting.”

Heard also insisted she had no reason to believe that Depp would return to that house in question downtown because she would usually go there if they’d been fighting and he would stay in his West Hollywood home.

What do you think? Do you believe her story? It’s definitely the first time that we heard that a dog got bowel control issues for an entire life after eating some weed.