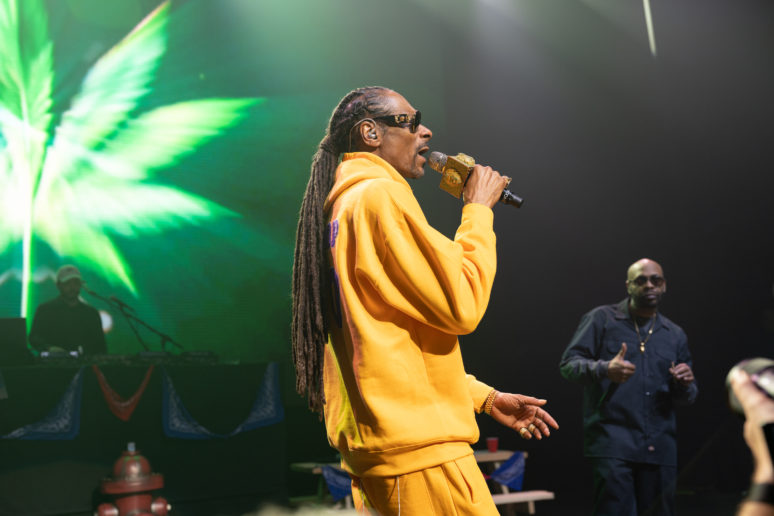 Snoop Dogg, Eminem, Dr. Dre, Kendrick Lamar, and Mary J. Blige will descend on the SoFi Stadium next Sunday for what will be a historic Pepsi Halftime Show during Super Bowl LVI.

Ahead of the big game, bets are already being placed on whether Snoop Dogg will light up during the performance or not.

Betting platform Bovada is allowing players to gamble on the possibility of Snoop Dogg lighting up a “fat doobie” with “Yes” at +250, meaning if someone bets $250, they’ll win $100 if he sparks the “devil’s lettuce,” which is legal in California.

Anyone familiar with Snoop’s smoking tendencies will likely feel confident voting “yes.” However, there’s a chance with the National Football League’s strict policies he won’t be able to get away with it. Then again, he is Snoop Dogg, so anything’s possible.

Bovada currently boasts over 100 different prop bets, including the national anthem length, winner of the coin flip, if any part of Eminem’s performance will be censored, what team jersey Drake will wear, and even how many commercials will feature a dog.

Dr. Dre announced the Pepsi Halftime Show lineup last September via Instagram. Roc Nation was tagged in the post, making it obvious JAY-Z played an integral role in making it happen. Roc Nation signed a deal with the National Football League in 2019 to aid in its social justice efforts and bolster its connections in the music industry. As the NFL’s “live music entertainment strategist,” JAY-Z and Roc Nation serve as consultants on productions such as the Super Bowl Halftime Show.

“The opportunity to perform at the Super Bowl Halftime Show, and to do it in my backyard, will be one of the biggest thrills of my career,” Dr. Dre said in a statement sent to HipHopDX at the time. “I’m grateful to JAY-Z, Roc Nation, the NFL, and Pepsi as well as Snoop Dogg, Eminem, Mary J. Blige, and Kendrick Lamar for joining me in what will be an unforgettable cultural moment.”

JAY-Z added, “This is the Pepsi Super Bowl Halftime Show. This is history in the making.” The Los Angeles Rams take on the Cincinnati Bengals on February 13. Check out the trailer for the halftime show below.