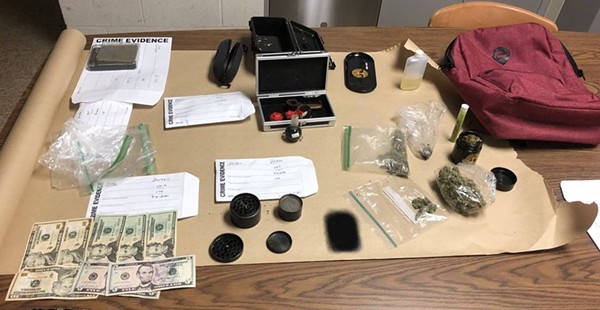 You can’t make this shit up…

It feels like there is no week passing without some police department having the urge to post one of their arrests on social media. The result is always the same; 95% of the comments are roasting the coppers. It’s no different this time around.

The announcement of those details came in all capital letters on Facebook, as befitting a delivery as any for this special law enforcement effort, for this was not a usual bust to be buried. This was one to be trumpeted.

As the world continues to suffer from the coronavirus, advocates and government agencies have warned that though our attention is focused on the pandemic, the “drug epidemic” has not disappeared.

And thankful they would be, as they read on in the police department’s description of the big bust:

“On Friday September 4th, 2020 at 10:30 P.M. our patrol division stopped a vehicle as it left the Motel 6 on Maplegrove Road for a traffic violation. While investigating the violation, K-9 Loki was called to the scene and detected the odor of illegal narcotics coming from the vehicle. A subsequent search of the vehicle revealed the source of the odors detected by K-9 Loki,” the Facebook post read, teasing the news that would follow and shock the reader just a moment later.

“Seized from the vehicle were 4 bags of marijuana, 3 smoking pipes, marijuana grinders, a digital scale, baggies, fake urine and cash,” it continued, too bashful to disclose the insane amount of cash that was confiscated: $100.

“After further investigation, the 19 year old Willowick resident who was the sole occupant and driver of the vehicle was taken into custody. The male was charged with the traffic violation, no operators license and drug trafficking. He was later released and given a court date in the Willoughby Municipal Court.”

While the department shared the news publicly on Facebook, it has been shy about detailing the greater community harm the arrest prevented. Some sources say at least one person was prevented from getting high and falling asleep with a slice of Pizza in their hands.

By the way, make sure to check out the comments on the original Facebook post; you won’t regret it, promise!