What is Rainbow Weed? 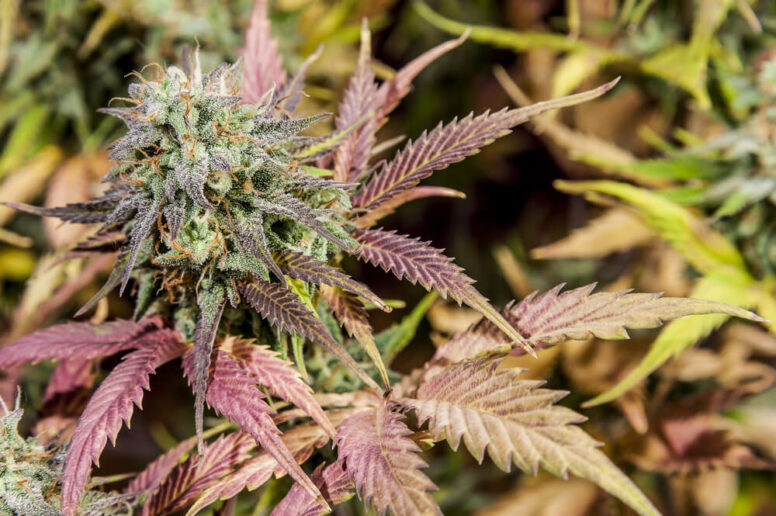 No, it’s not your imagination and it is not a myth. The rainbow weed you have stumbled across on social media is a colorful strain of cannabis that does exist in real life. In fact, the seeds are widely available through major international suppliers.  For those lucky enough to live in a legalized state, it can likely found on a local dispensary shelf.

If you are not acquainted with the rumors about with this strain, a quick google search will result in hundreds of images. While the photos may draw you in, a word of warning is needed. The most shared images have been highly manipulated to bring out the saturated colors. This photoshopping has helped perpetuate rainbow weed’s online popularity.

Real Rainbow bud does exist, despite the seemingly unlimited photoshopped photos propagated online. Despite this reality, users continue to debate the legitimacy of the strain. Are the rumors true? Are the images photoshopped?

In real life, the rainbow weed found at dispensaries is more muted in vibrancy than those seen online. If you find a variety of rainbow which isn’t true to its colorful reputation, don’t despair. Most people still consider this an exceptionally tasty strain.

Under normal circumstances, Rainbow Kush will likely show hints of orange, white and yellow. It might also lean in the other direction with pink and purple hues. The bottom line is that the bright rainbow highlights are much mellower than the internet would have you believe.

There are a few theories about the origin of the original Rainbow weed, but it seems fair to assume that at least a few top developers have been involved. This includes one strain produced by Lifetime Seeds who crossed Dancehall with Blueberry. Another popular variety of Rainbow Kush traces back to the Amsterdam Marijuana Seeds (AMS) company.

AMS carefully conceived their Rainbow strain with advice from experienced Dutch Masters. They crossed Hindu Kush and Master Kush to create their version of the Rainbow bud. They advise users that “It’s the most colorful strain ever invented in looks and flavor.” While their statement makes a great sales pitch, it may be a little over enthusiastic.

Rainbow weed has a taste profile that hits strong notes of pine and for some, a potent skunkiness. For the more refined connoisseur, there may even be hints of coffee and spice. The crystal distribution is heavily scattered across the flower and should be quite sticky.

Can you grow your own Rainbow weed? Of course! Seeds are easily found online through all the top companies. After a little research, one can discover what specific growing conditions foster what color development.

Under natural conditions marijuana only starts changing color when it begins to flower. When the flower phase begins, buds start to darken into deep purples, blacks, and indigos. Other buds develop bright oranges, yellows, reds and even whites. While some strains naturally lend themselves to color development, color shifts may also occur by manipulating the growing conditions.

When AMS Rainbow Kush is grown indoors, with well-controlled growing conditions, the yield is up to 750 grams or 26.5 ounces per square meter. The Rainbow Kush strain is listed as relatively easy to moderately difficult to grow. It usually requires only nine weeks to enter the bloom stage. 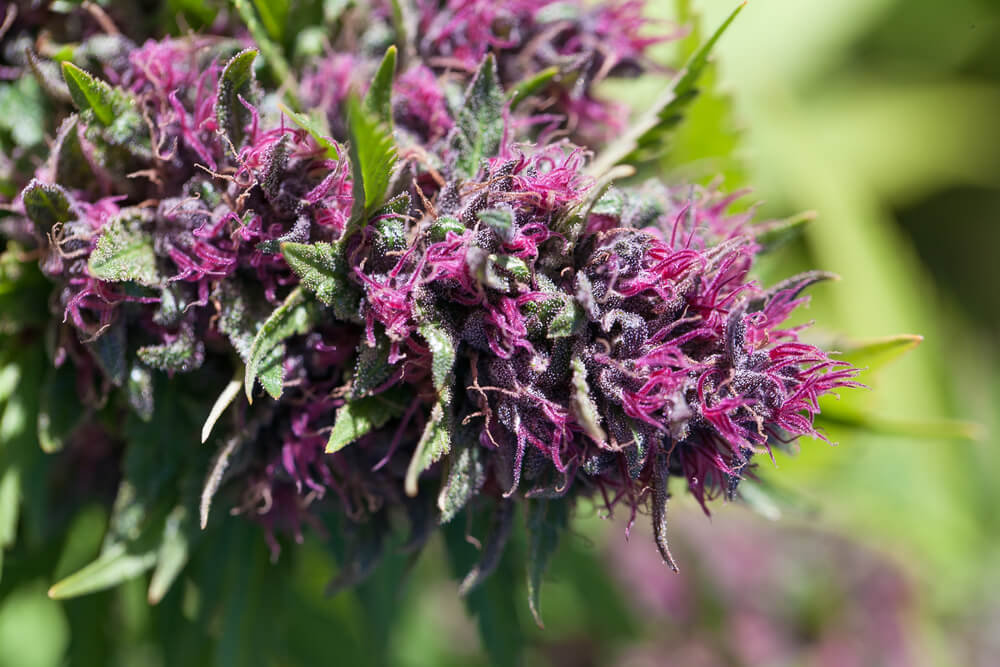 Red and Pink strains are rare and extremely sought after. For those lucky enough to find them, typical indoor growing conditions will quickly foster the red hues. Specific genetic phenotypes cause red hues to appear. They are difficult to promote in strains without this particular genetic code makeup. Some sources even suggest that theoretically any strain can produce mildly red colors if deprived of phosphorus. 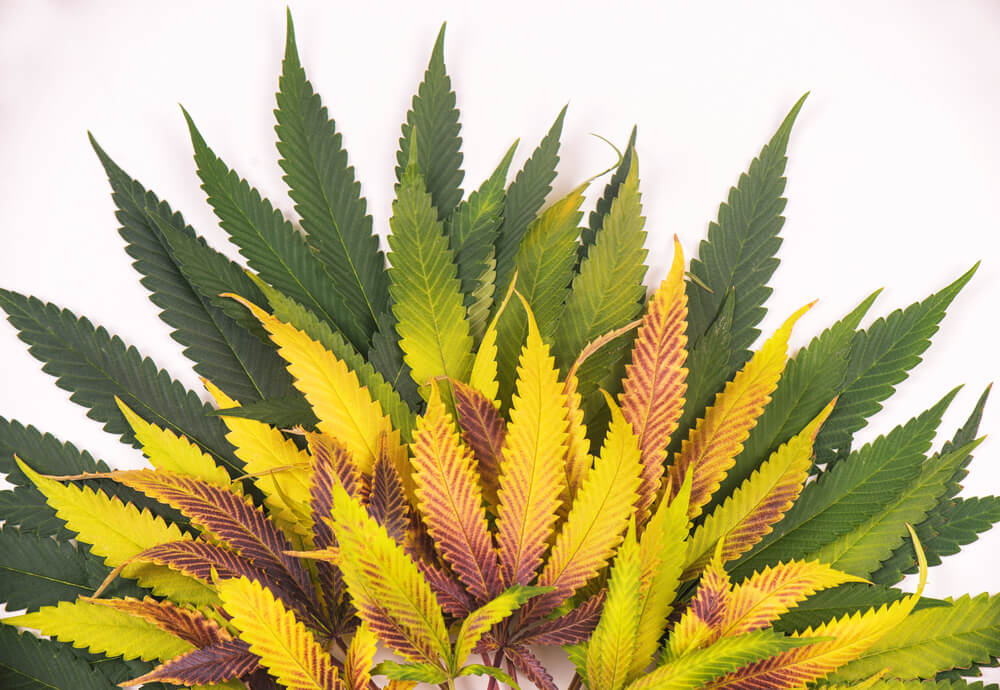 The primary cause of yellow, orange and whites appearing in your buds is through increasing soil alkaline during the flowering stage. Encourage dark, rich soil with lots of nutritional content for your plants, which means adding natural animal fertilizers. By adding organic matter and pH monitoring, growers can promote sunny tones developing in certain strains. 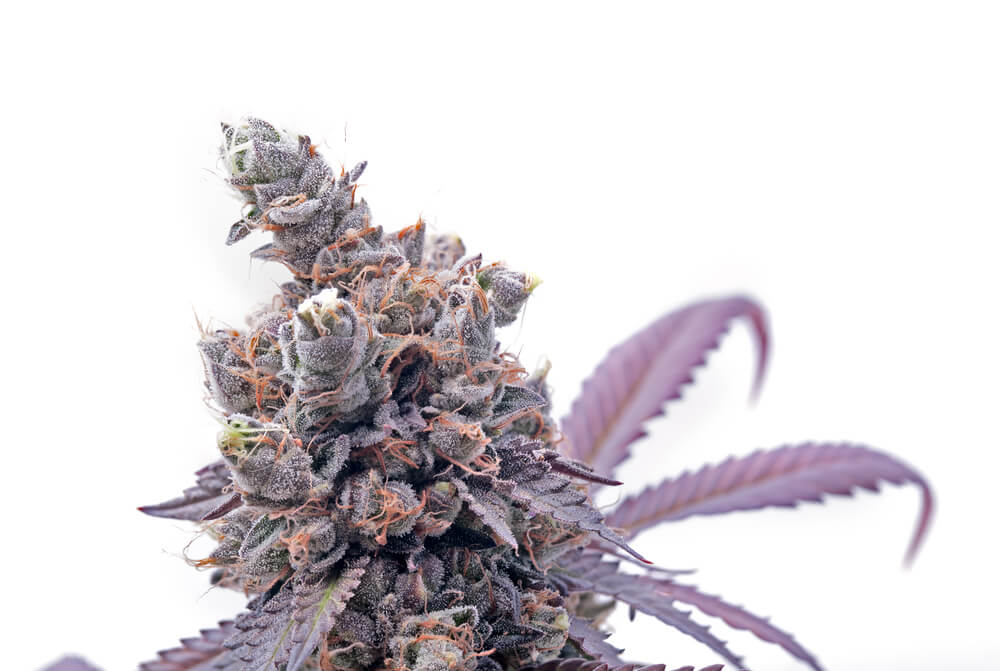 Genetic manipulation is the only way to achieve deep, dark, dank colors, as well as the addition of cool growing conditions. Nighttime temperatures need to dip very low to foster purple hues. Some sources even suggest down to 50 degrees Fahrenheit or 10 degrees Celsius. Even if the strain leans towards darker shades, it’s likely you’ll only end up with warm reds and yellows during bloom phase. Dark colors really need low nighttime temperatures.

While there are a few varieties of rainbow marijuana on the market, the most common strain is a mixture of Indica and Sativa. Typically the combination is nearly a 50/50 ratio. It is extremely THC heavy, with only small CBD elements. The AMS Rainbow Kush strain tests between 14.5 percent and 17 percent THC.

Because of the higher THC content, Rainbow weed typically is used to treat lack of appetite, nausea, vomiting, and pain. The high THC content could potentially offer relief for those undergoing chemotherapy and radiation treatments.

Some of the main feelings linked with Rainbow weed are euphoria, creativity, and relaxation. Rainbow bud should not cause extreme anxiety either as it contains some CBD. When weed contains CBD, it helps to reduce the paranoia and anxiety which is sometimes triggered by THC.