By Jess Mac October 2, 2017
Guides how to make grinder

It’s natural that as people grow older, their cannabis smoking setup becomes well-practiced and refined. Smokers begin to purchase specialty equipment and learn what they like and what they don’t. Everyone is subconsciously striving to make their lives easier next time to go to roll a joint. It goes without saying that having the right tools for the job makes smoking a much more pleasant experience.

Thinking about to when you first started smoking weed, it’s likely you remember some pretty amateur setups. In fact, your tools were probably dubious. Remember smoking out of an old soda can or carving out an apple? You likely chopped your weed by hand and then blew the smoke out of a jail toker. It took many attempts for you to learn how to artistically roll a joint.

However, there could come a time for even a seasoned cannabis enthusiast that you’ll find yourself in a predicament. What will you do the next time you can’t find your grinder? Grinding weed is as much of a ritual as grinding the beans for their morning cup of coffee. If you cut one important step out of the process, the comfortable routine falls apart. Don’t panic if your weed grinder goes missing, because there are many ways to make a homemade weed grinder.

What to do When you Lose your Grinder

Because grinding weed is such an important step in the process of smoking weed, one cannot ignore it. For example, you can’t just throw a full bud into the bubbler and expect the same smokability. In fact, if it’s not ground up correctly, you’ll get far less out of your nugs than expected; essentially just burning your money

Why Grind your Weed Anyway?

As mentioned, it’s unwise to simply skip the grinding and hope for the same smoking experience. Leaving the cannabis in large bud format tends to lead to a host of problems down the line. Grinding weed always improves the smoking experience, but there are certainly some instances where it becomes absolutely necessary. Ground bud ensures the smooth operation of many different smoking devices.

The primary reason for cutting up weed into smoother, more evenly sized pieces is to cut back on waste. Plopping nugs directly into the bowl and lighting up will result in an uneven burn. While smaller pieces will completely burn out, larger chunks will be left untouched or charred only on the outside. By chopping the weed into equally sized smaller pieces, the cannabis burns evenly leaving no bud behind.

Another important reason for grinding weed into fine pieces is that it prevents clogs. This is especially true for smaller smoking devices such as one-hitters and pipes. Because the bowl and chambers tend to be quite restricted, any weed smoker can tell you pipes, and one-hitters are prone to becoming plugged up. A simple way to avoid clogging is to chop your weed finely. Air flows more freely through the bowl and around the smaller pieces of bud to encourage an even burn. Fewer nugs will be left untouched, which means fewer pieces will travel down into the chambers, clogging the machine.

When Grinding is Absolutely Necessary

While grinding weed makes for a smoother smoking experience in bongs and pipes, it is even more beneficial for joints and vaporizers. When the pot is evenly sized and distributed along the joint, the smoke, and more importantly airflow, is allowed to travel freely from one end to the other. Evenly distributed weed will help the cherry of fire to burn slowly and uniformly down the shaft. No more one-sided joint disasters!

Most vaporizers come with strict instructions on grinding weed. According to some instructions, under no circumstances should the user use their fingers or other rudimentary devices to prep their weed for vaping. While a bit dramatic, the instructions are not entirely incorrect because most vaporizers will only achieve peak performance if they have perfectly ground cannabis on the plate.

Finally, many people believe that extensive handling destroys the potent crystal on the bud. Especially if you are breaking up the flower with your fingers, the amount of crystal lost through contact with your skin is significant. Your skin is naturally oily, which absorbs crystal at an exorbitant rate. This is why its so important to make your own homemade weed grinder!

How to Quickly Make A Homemade Weed Grinder

If you find yourself in a bind regarding weed grinding, look no further than the following helpful homemade weed grinder suggestions. While some options are more useful than others, each still serves a purpose depending on dire the situation is. 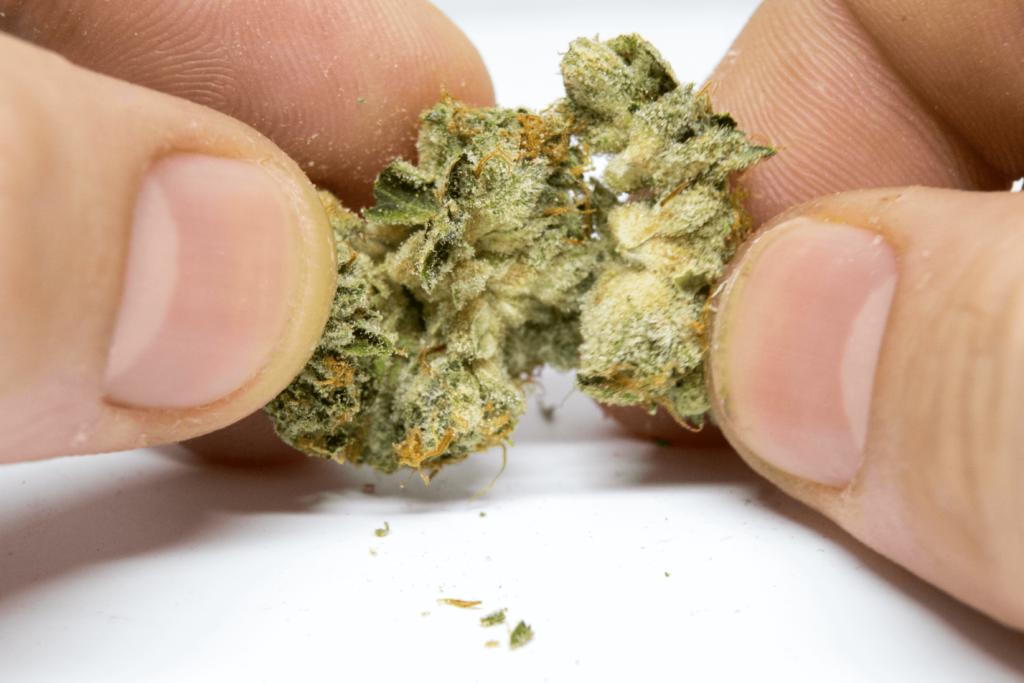 While this is the most basic method, hopefully, you are convinced by now it is not the most efficient or effective. Despite this downside, finger chopping does still have a place on the list. On a deserted island full of weed, finger chopping would still do the trick. If you resort to finger chopping in times of need, wash your hands before and limit the time of handling to avoid losing too much stickiness.

Knife and a Cutting Board

Next step up in the evolution of homemade weed grinders is using a simple knife and cutting board setup. If it works for vegetables, why won’t it work for marijuana! This method also requires a bit of handling with your fingers, and will likely still lose a significant amount of crystal. Most types of chopping boards, like wood and plastic, can be quite porous and will only serve to trap the crystal.

Scissors and a Shot Glass

Grab a shot glass from your cupboard and a pair of scissors. You now are holding one of the easiest homemade weed grinders ever invented. Place the buds at the bottom of the shot glass, and then put the end of the scissors into the glass, then start chopping! It should be quick and painless, and it will also keep the majority of the crystal where it belongs.

Another ingenious method for grinding weed without a real grinder is the bottle and coin solution. All you need is a small bottle that is even in size from top to bottom (pill bottles are typically a perfect shape) and two nickels. Place the bud in the bottle, add the two nickels, and close the container. It literally can take a little as a few seconds of serious shaking to break up the weed into an even grind.

The final suggestion is perfect for grinding large quantities of weed. While you’ll likely not want to use your electric coffee grinder for anything other than cannabis after the initial use, it makes an excellent long-term investment once you make the switch. It can grind large volumes of weed in no time at all and will do so without losing any delicious crystal in the process.