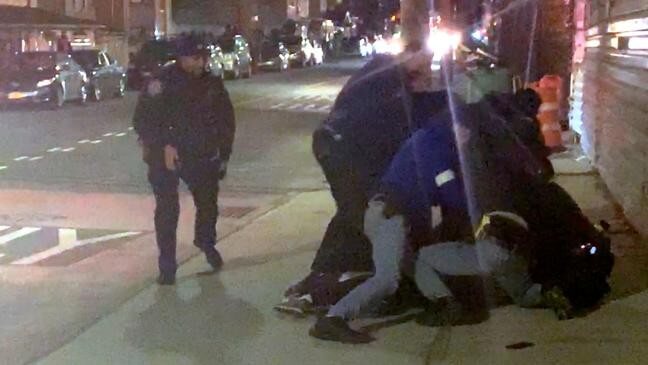 A large group of New York police officers violently arrested a young black man on suspicion of smoking a joint in a nearby park.

A series of videos captured and posted to Twitter by a bystander shows a plainclothes NYPD officer pushing a man against a wall.

The man, identified as 20-year-old Fitzroy Gayle by ABC News, can be seen holding both hands in the air, repeatedly asking, “what crime did I commit?”

“What did I do? I did no to anything,” he says, asking the officer again what crime he is accused of.

The unidentified officer ignores Gayle’s questions and seems to pull out a taser, which he points at Gayle, ordering to stop moving, all while still pushing him against the wall.

I’m walking home from work and this undercover cop was holding this man. The guy asked for the cop to identify himself, he ignore that. He asked what crime he commit, he ignore that too. I pulled out my phone. You can hear the guy screaming “I never thought it would happen to me” pic.twitter.com/YW2dI3g8fk

“I don’t have a weapon on me,” Gayle tells the officer. “What crime did I commit? You’re supposed to [tell me.] That’s the law.”

After about a minute and a half of Gayle pleading with the officer, and him ignoring his questions, seven uniformed police officers run over and immediately force Gayle to the ground.

Pt 2. This shit was just completely unnecessary. Yes the guy was in the park but he has a right to be in there because it closes at 9pm. This happened in Canarsie, Brooklyn. pic.twitter.com/hHjPq3JY2c

As Gayle screams for help, another officer tells the woman filming — identified as New York-based comedian Velvet — to back up.

“I never been arrested a day in my life,” the Gayle is heard saying in between cries for help. Meanwhile, more bystanders can be heard asking for the officers to stop.

The videos, which Velvet posted to Twitter shortly after the violent arrest, quickly went viral and had garnered over 11 million views by Friday evening.

And this is where these cops went BACK to FIND whatever he ALLEGEDLY had pic.twitter.com/nsUIu03mza

“I’m walking home from work and this undercover cop was holding this man,” Velvet tweeted.

“The guy asked for the cop to identify himself, he ignore [sic] that. He asked what crime he commit, he ignore that too. I pulled out my phone. You can hear the guy screaming ‘I never thought it would happen to me.’”

Gayle told BuzzFeed News he didn’t know why he was being arrested. “It’s not like I was fighting with the officers. I was just trying to find out why [they were arresting me],” he said.

“I was panicking a little because I had never been in this type of situation before. They probably took that as me being aggressive.”

At a press conference Thursday, NYPD Commissioner Dermot Shea told reporters that officers were called to the area after people heard shots being fired.

The officers saw two young men smoking weed in a park, who took off running once police approached them.

But Gayle told ABC News, he wasn’t running at all. “I came out of the park, I calmly walked across the street,” he said.

“[The officer] was jogging towards me while I was walking and I’m not stupid enough to run from the cops because it gives them a green light to shoot at me.”

Both Shea and New York City’s Mayor Bill de Blasio said they “have concerns” about the violent arrest.

“I don’t like what I saw obviously — it’s not what we’re trying to do here,” de Blasio said on Thursday.

“I don’t want any officer to stand on someone’s leg if they don’t have to. I want more communication between officers and the people they’re confronting.”

According to ABC News, Gayle was charged with marijuana possession, resisting arrest, and obstructing governmental administration.

Gayle says he did not have any weed on him at the time.

He told Buzzfeed News that while he had seen incidents of police brutality, he never thought it would happen to him.

“I never did anything stupid, I already know how everything works. I’m not going to go get myself in trouble,” he said.

“It’s crazy, like, I wasn’t really surprised. I just thought it wasn’t going to happen to me.”

Gayle’s lawyer, Sanford Rubenstein, told The New York Times the videos show “that the era of stop and frisk is not over in New York City. The police officers involved in this brutal assault must be brought to justice.”

Last year, New York decriminalized cannabis use, downgrading the penalty for the unlawful possession of weed from a misdemeanor to a fine.

Rebecca Kavanagh, a criminal defense attorney in New York City, told HuffPost that Gayle did not appear to pose a threat and that the “brutality” displayed by the police officers arresting him was illegal.

“It’s absolutely an excessive use of force,” she said. “He’s being fully cooperative. He has his hands in the air so he’s clearly not in a position where he’s reaching for anything of a threat to the cop.”