The Free Thought Project has reported on another case where police wasted taxpayer dollars in a way that left us speechless. This time, the North Carolina State Bureau of Investigation concluded a six-month-long joint undercover sting operation with the Bryson City Police Department and North Carolina Alcohol Law Enforcement to bust a gas station for selling glass pipes. Their entire mission for six months was to stake out a single gas station who had a glass display case which contained the pipes.

At the end of the operation, police made no arrests, they just seized the glass pipes.

What’s more, these drug warriors then went to Facebook to brag about this case and celebrate the fact that they wasted taxpayer dollars for six months on an undercover operation that netted them a bunch of glass.

After they got roasted by the public, they removed the post after a couple of days. Luckily the screenshot is still available.

A 6-month undercover operation and joint effort by the Bryson City Police Department and North Carolina Alcohol Law Enforcement resulted in the raid of a local convenience store and the seizure of over 1,000 illegal methamphetamine and marijuana pipes.

Bryson City Police Department of Swain County contacted North Carolina Alcohol Law Enforcement to investigate illegal activity at BJ’s Quick Stop. Complaints from the community were fueled by the sale of drug paraphernalia and arrests made by the PD of patrons found with illegal drugs. Glass pipes specifically for “meth” and marijuana use were displayed and sold openly, making it a prime location for users. Small plastic bags, marijuana grinders, scales, drug concealment containers, and fake urine used to evade drug screenings were also sold.

Over several months, the two agencies worked together to conduct multiple undercover purchases. On several occasions, the employees even gave recommendations and asked for customer feedback of the items sold. On Thursday, January 24, 2019, Bryson City Police Department and NCALE executed a search warrant of BJ’s Quick Stop.

Authorities have conducted multiple interviews, but no arrests have been made. The investigation is ongoing.

It is true that entirely legal glass—when shaped into a device that can be used to put weed in it for smoking—is illegal in the state if marketed for actual drugs. However, head shops and gas stations have long sold the pipes as tobacco pipes as a way of getting around the state’s ridiculous ban on paraphernalia. Authorities were attempting to catch the store selling these glass pipes for something else other than tobacco. So they spent six months undercover to do it. 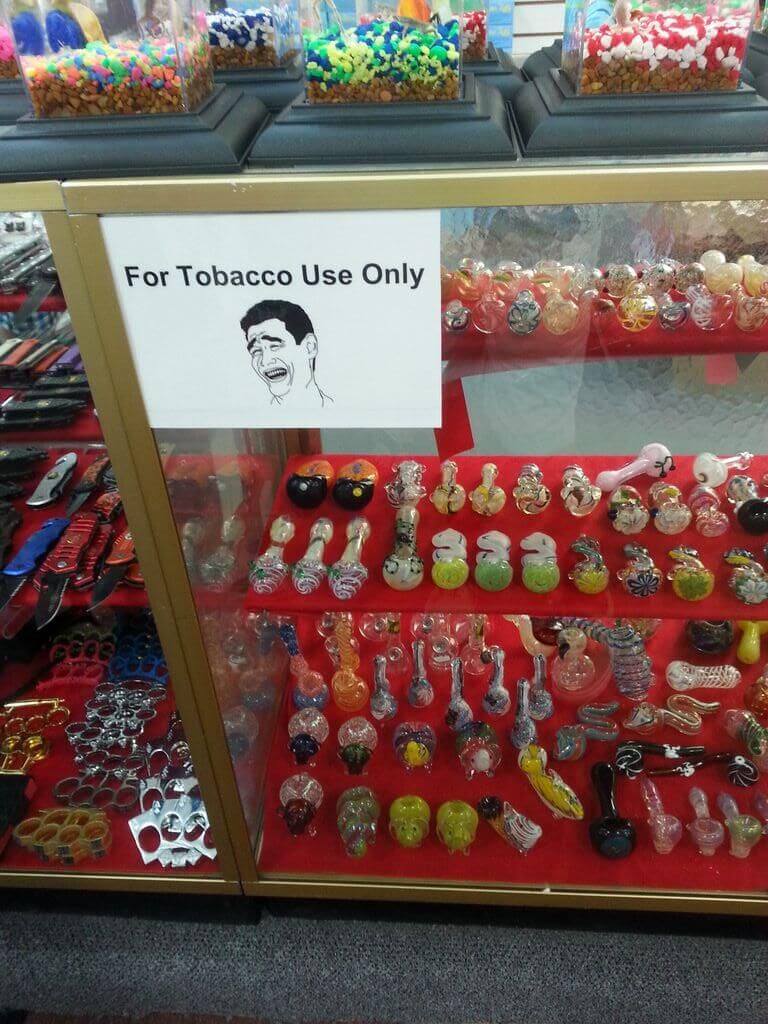 Nobody knows why these people decided to brag on Facebook about what they did, but it’s a common practice. We reported another case recently.

Some of the comments left on the Facebook page were hilarious while some of them pointed out the fact that these resources could’ve been spent solving actual crimes.

How many rape kits were ignored so you could waste money doing this?

Just think about the fact that these clowns are PROUD that they spent 6 months wasting taxpayer money raiding a gas station most likely located in a low-income area to get some bowls and bongs off the street. Great work guys! War on drugs officially won,

Sadly, however, this is no laughing matter. Police officers across the country squander taxpayer resources going after ridiculous busts like this one all the time. There was not a single victim of this alleged “criminal activity,” yet authorities devoted six months of resources to it. A travesty indeed.

Help us spread the word and share this article; the more people see how their tax money gets wasted, the more likely it is that the cops will stop with this nonsense one day.