This Couple’s Weed-Themed Wedding is Every Stoner’s Dream 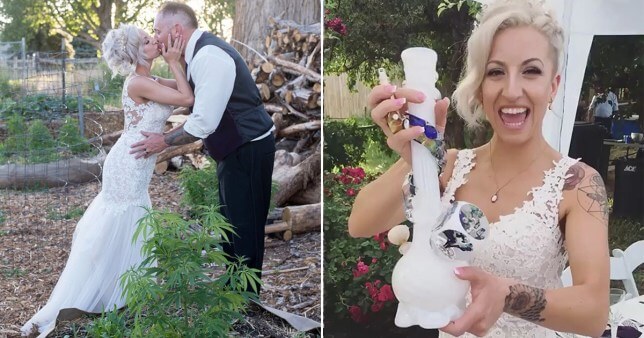 You could say that Clara Higgins and her husband Dusty love weed.

In fact, they love cannabis so much that when the happy couple decided to get married, they wanted to make Mary Jane a major part of their ceremony.

• This Weed-Loving Couple Gave Their Kids the Best Names Ever

The two weed lovers first met when Clara was still working at a bar and in need of something to smoke. Dusty, all gentlemanly, offered to loan her a joint and unknowingly set off a cannabis love story that culminated in an amazing green wedding.

“Cannabis is a huge part of our lives, all of our friends use cannabis, we are in the cannabis industry and I wanted weed instead of wine,” Clara said.

“I wanted to have a different wedding, one that represented our love. We are very non-traditional in some ways so the cannabis-themed wedding was important.”

Clara even had a special wedding bong made by Oregon-based Noble Glass.

“I had a custom wedding bong made from Noble Glass, and that created a whole other business for me. I met Noble Glass at a trade show the year before I was married,” she explained.

“I was planning my wedding and was thinking wow, it would be so special to have a bong made just for us on that day. So, I asked if they would and they were happy to! I told them the colors of my wedding, what I wanted and they made my baby!”

After the couple exchanged their vows and kissed for the first time as husband and wife, Clara was handed the wedding bong to take her first hit as a married woman.

“So, we had our ceremony and after we said our vows and had our first kiss as Mr and Mrs Higgins, our wedding officiate handed me the bong, loaded and ready to go. I took the first bong rip in front of everyone and he took the next! It’s like jumping the broom but for stoners,” Clara said.

The rest of Clara and Dusty’s special day followed the same theme. Even before the ceremony began, their guests were able to enjoy a fully-stocked cannabis bar with ten different flower varieties, concentrates, edibles, and lots of pipes and bongs to smoke from.

“We had our cannabis garden growing behind our reception area so our guests could look at them growing, they were just babies but it was still neat.”

Clara and Dusty got married in June 2018, and since then, a lot has happened. The couple now runs their own smoking accessories store in Grand Junction, Colorado, and has even entered a collaboration with Noble Glass to produce a line of silky white wedding bongs.