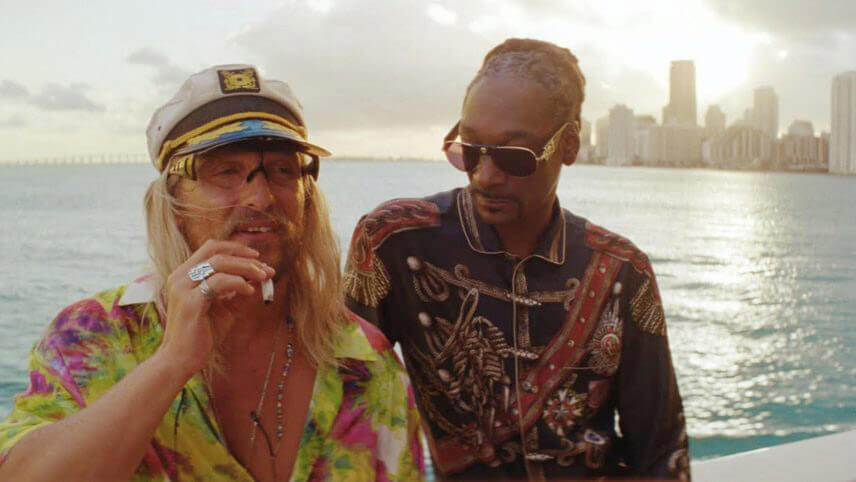 There have been plenty of stoner films released over the last decades: Cheech & Chong, How High, Pineapple Express, Harold & Kumar Go To White Castle, Dazed and Confused, Friday and many others. Check our top 25 list here.

Each one has taken audiences on a hilarious, outrageous journey that could never happen in real life. But it looks like we’re about to get a film that could beat all these classics.

The Beach Bum stars Matthew McConaughey in the titular role of ‘Moondog’ – the Beach Bum himself. IMDB describes the character as a ‘rebellious stoner’ who ‘lives life by his own rules’.

The trailer gives us a look at a man with enormous riches who pisses it all away on drugs, girls, partying and a very, very lavish lifestyle. Moondog is a poet who gets arrested and tries to churn out a poem to last through the ages. It also shows us beautiful cars, flying a plane while blazed and a parrot that’s addicted to cocaine.

The epic movie also stars Snoop Dogg, Isla Fisher, Jonah Hill and Zac Efron. Who else would you want for a stoner movie? Ok, maybe Seth Rogen but let’s not get too picky.

While the teaser for the film gives us expectations that it will be epic, it seems as though the filming process was just as intense. We already wrote about how Snoop ditched McConaugheys fake weed with real weed on the set. McConaughey was asked by Jimmy Kimmel what it was like working on The Beach Bumand what his favorite moment was.

The 49-year-old seemed to have quite an instant answer: Getting high with Snoop – or getting ‘Snooped’, as he called it, because he got tricked into getting stoned.

He explained that prop weed isn’t like your usual stuff – for obvious reasons – and that it’s usually an actual herb like oregano or something.

He said: “There’s a scene where I’m going to Snoop because I’ve got writers block and Snoop has the magic weed. So I went to the prop man to make sure I have the prop weed. So it’s a six minute scene where we pass back and forth and all of sudden at the end he goes ‘Yo Moondog’ – that’s my character – ‘that ain’t prop weed, that’s Snoop Weed’. And I was like ‘oh you son of a a gun’.

The next nine hours were a lot of fun but I don’t think we used one word in the English language.

The Beach Bum will be released on 22 March 2019. In the meantime you can check out the trailer: