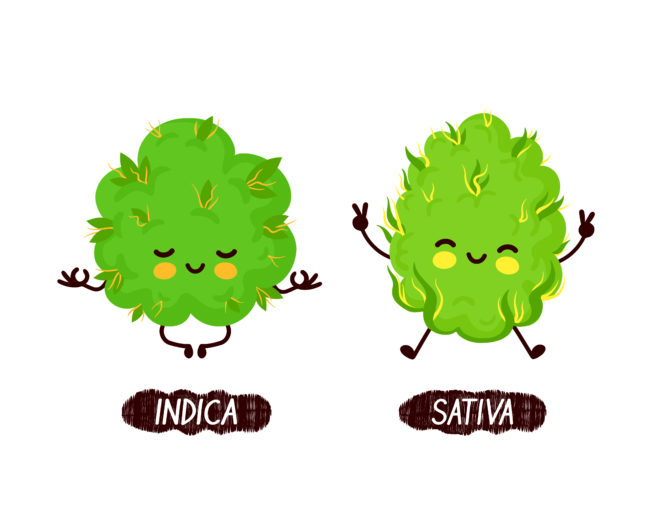 Dispensaries, coffee shops, and seed sellers often offer a menu of strains with all kinds of weird and wacky names that a stoned person must have dreamed up. However, new research suggests that this labeling might often be little more than misleading marketing.

A new study published in the journal PLOS ONE examined tens of thousands of weed samples from commercial dispensaries and found that the strain labels were often inconsistent, confusing, or wrong.

Although cannabis has been legalized in certain states for ten years and has since grown to become a multi-billion dollar industry, there’s still no standardized labeling system, which the researchers say leads to inconsistent labeling.

“A farmer can’t just pick up an apple and decide to call it a Red Delicious. A beer manufacturer can’t just arbitrarily label their product a Double IPA. There are standards. But that is not the case for the cannabis industry,” Nick Jikomes, study co-author and director of science and innovation for the e-commerce cannabis marketplace Leafly.com, said.

The study is the largest to analyze commercial dispensary-grade cannabis to date chemically. The researchers looked at over 90,000 samples across six states, looking for popular strain names regularly seen across the country.

Despite whatever the label said, the chemical components of the strains could be all over the place. The team used chemical analysis to understand the concentrations of cannabinoids. This included THC, the primary psychoactive constituent in cannabis, and terpenes, chemical compounds that provide aromas and flavors.

Just as you’d expect, most cannabinoids in recreational cannabis were psychoactive THC. Meanwhile, the terpene content tended to fall into three categories: those high in the terpenes caryophyllene and limonene, those high in myrcene and pinene, and those high in terpinolene and myrcene.

However, these three categories did not always correspond to the Indica, Sativa, and Hybrid labeling scheme.

“In other words, a sample with the label ‘Indica’ will likely have an indistinguishable terpene composition as samples labeled ‘Sativa’ or ‘Hybrid,'” the study reads.

The researchers said some cultivators appear to be paying close attention to quality, ensuring that their product contains precisely what it says on the package. However, the cannabis industry is still a bit of a “Wild West” with relatively few regulations, allowing some producers to become lax with labeling. If the cannabis industry wants to become legitimate, the researchers argue, this needs to change.

“Our findings suggest that the prevailing labeling system is not an effective or safe way to provide information about these products,” said co-author Brian Keegan, an assistant professor of Information Science at CU Boulder. “This is a real challenge for an industry trying to professionalize itself.”

The team also believes we need a more comprehensive understanding of cannabis strains’ chemical makeup along with market regulation. Eventually, perhaps we could start seeing labels that show consumers the complete list of ingredients they’re putting into their body, including THC and CBD, terpenes, flavonoids, and other compounds.

“It’s like if your cereal box only showed calories and fat and nothing else,” added Keegan. “We as consumers need to be pushing for more information. If we do that, the industry will respond.”