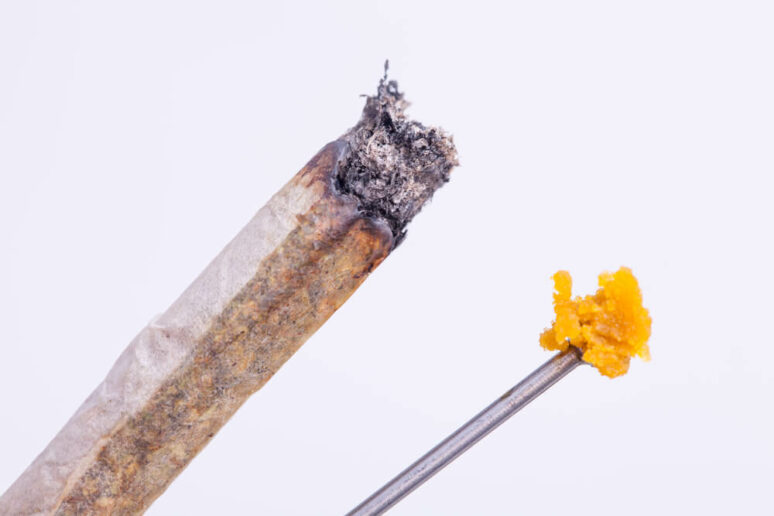 Science has spoken: dabbing is way, way, way more efficient than smoking a joint. About 300% more efficient, according to Swiss scientists who are fortunate enough to get paid to vaporize cannabis concentrates.

These researchers looked at how efficiently lungs absorb cannabinoids when dabbing concentrates vs. smoking cannabis flower in a joint. They found that when you smoke a joint, your THC absorption ranged from about 12-27%, depending on the quality of your cannabis flowers. But when you dab, you get about 75.5% absorption of THC.

In the words of the study, the “high recovery of total THC … by dabbing cannot be achieved by smoking cannabis.”

The study notes that the efficiency gap between smoking and dabbing is probably even more significant than the numbers indicate. When smoking a joint, “further losses in recovery must be assumed by additional sidestream smoke.”

It’s not exactly shocking news that dabbing is more efficient than puffing. Any casual observer could see that when you smoke weed, a whole lot of that smoke ends up in in the air, but when you dab, pretty much all that vapor goes right down the throat of the person doing the dabbing.

There is one part of the equation which isn’t being taken into account when we talk about efficiency, and that’s the fact that someone still has to make the concentrate before you can dab it. The THC which gets burned off in the concentration process should also be calculated into the equation. So should the time, cost of solvents and machinery involved in making a batch of decent extract.

We don’t know the exact numbers, but that’s going to take a chunk out of that 300% lead. And while we’re getting nitpicky, we’ll also mention that the Swiss study did not use live patients but instead employed robots with lung simulators to measure cannabinoid absorption.