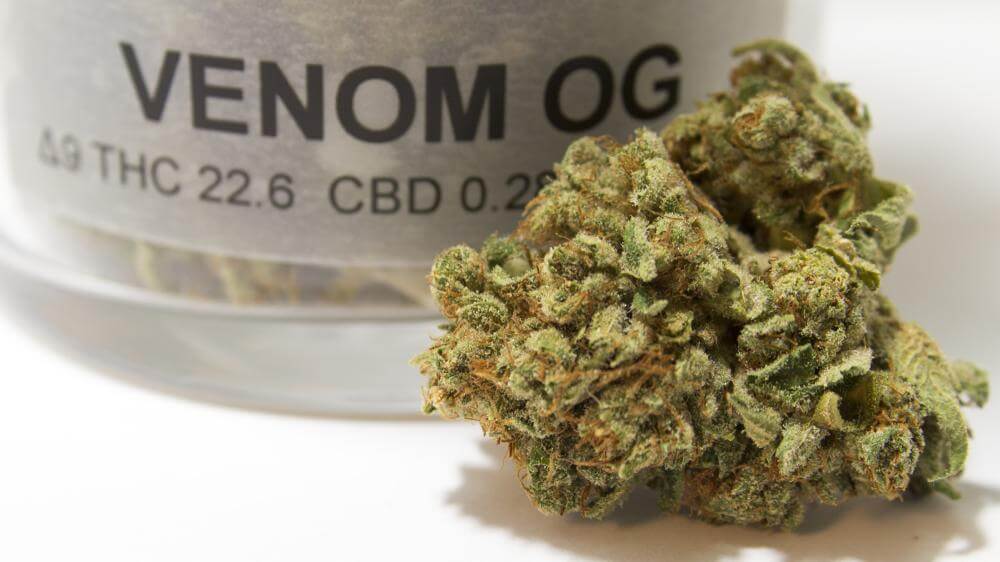 Sometimes an unsettling strain name is definitely warranted, and this is the case with the Venom OG Kush, commonly known as the Venom OG. The Venom OG is a potent strain which hits like a train if you ever stand in its way. Bred by Rare Dankness Seeds, the Venom OG is a versatile strain because of its high and medicinal effects.

Venom OG Kush is a pretty even hybrid. It’s a cross between Poison OG and the Rare Dankness #1. Growing this strain shouldn’t be too difficult if you have a few grows under your belt. The strain takes 7-8 weeks to flower; if you’re going to grow it outside harvest by early October. The yield is on the lower side, getting you about 350-400 grams per square meter indoors or about 200 grams per plant under the sun. The Venom OG Kush prefers warmer, sub-tropical climates where the sun tend to shine more than it rains.

If you like your weed with an attitude you will like the sour, pungent smoke that comes with the Venom OG. Taking strong airs of all diesel, lime and pine, some might find the taste to be bitter and the smoke rough. The buds carry a darker-than-usual shade of green even though the amount of trichomes and chestnut pistils might not let your eyes believe so.

While there are no lab test data readily available online, different sources online say the THC percentage of the Venom OG can be upwards of 25%. This is totally believable as anyone who tried a couple of puffs of the Venom OG had certainly been taken on the Ganja Express.

Foremost, the Venom OG is a strain best used as a sedative. The high of the Venom OG is fast-acting and relaxes your whole body in an instant while simultaneously making your head feel stoned. The strain is not a social one: your focus will be on staying put and your priority in zoning-out.

The sedative attributes of the Venom OG makes it a great contender for stress. Because of its further relaxing properties, the strain has also been used to help patients fall asleep. Others have used the strain to lessen chronic pain, anxiety and inflammation.