In some alternate reality, I like to think that had Jesus been born a millennial, then him turning the water into wine would have instead involved turning pens into blunts. But alas, this scenario is fictitious and we are no closer to turning pens into blunts than the Cleveland Browns are to winning the Super Bowl. But fear not, we have been blessed with an sativa-dominant hybrid called Jesus, whose glorious qualities will make you feel both enlightened and euphoric, so much so that you will be reaching the heavens in no time.

Not a walk in the park but not overly difficult either, Jesus can be grown indoors or outdoors and preferably in a well ventilated environment (like all plants really). The plant flowers within 8-9 weeks, growing to a tall stature and producing yields of around 400-500g/m2 on average. Don’t expect the nugs to come pouring in without paying close attention to your plant babies though! Constant monitoring and care are a must for any grow.

Jesus compromises of dense, resinous light green buds with fine clear hairs. When put under light, the buds emit a slight golden glint which compliments its majestic qualities. Flavorwise it can be described as a mix between a limey and piney taste, and I would even go as far as to say that it strangely reminds me of gin. Jesus’s aroma is pungent but sweet which once again symbolizes its glorious and powerful qualities.
cit

As of today there is no specific test data available. Some estimates put its THC levels at around 18-19%, but more test data is pending. CBD test data is still pending.

You will notice that the high permeates through mind and body like a sedative but without immobilizing you, making you truly content with the bliss of the moment. You might want to stream some top tunes or get lost in a videogame at this point. The effects are medium to long-lasting, so ideal for people wanting to relax in a calm and soothing way. Solstice take a bow.

Jesus is best used medicinally to treat bodily pains, stress, and depression. Additionally, it can help to combat appetite loss, nausea, and fatigue, so the holy spirit is indeed alive and well in this strain.

Like many other weed varieties, Jesus can often bring about a dry mouth after having been smoked. Less frequently are spells of dizziness and anxiousness, but overall like the great man himself, there’s not much to hate with Jesus. 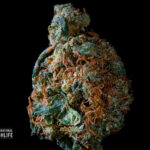