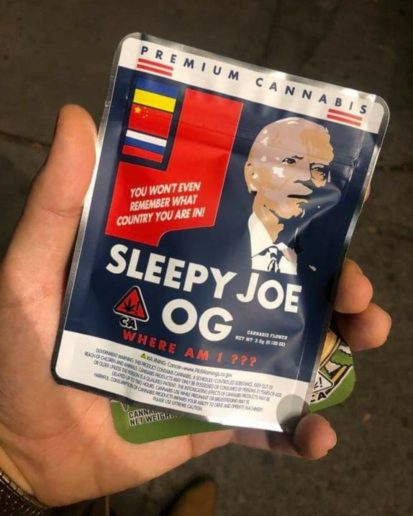 This past weekend, rapper Snoop Dogg made fun of President Joe Biden by endorsing a high-end cannabis strain called “Sleepy Joe OG,” which makes fun of the president’s apparent lack of clarity.

The box boasts, “You won’t even recognize the country you’re in!” next to a picture of Biden appearing confused.

Although Snoop Dogg campaigned for Hillary Clinton in 2016 and criticized the former president of the United States in the most disgusting terms possible, he has since come out strongly against the establishment Democrats, beginning with his support for Rick Caruso for Mayor of Los Angeles.

The musician also expressed support for former President Trump after he shortened the sentence of Death Row Records co-founder Michael “Harry O” Harris. The latter had served 30 years of a 25-year to life sentence for conspiracy to commit first-degree murder toward the conclusion of his administration.

After years of criticizing the former president, Snoop Dogg remarked, “That’s tremendous work for the president and his crew on the way out.”

They produced some outstanding work during their time inside and after they left. Tell them that I appreciate what they accomplished,” he reportedly stated. “It is astonishing what God’s effort can bring to life to convince others that He exists.”

Snoop Dogg was not a buddy of Donald Trump or his supporters before he made that more restrained remark. In a famous 2017 video, Snoop Dogg criticized Trump’s fans and used the n-word to refer to them.

“I just want to express this briefly; no political blather.” There is no way for any unpaid federal employees to vote for Donald Trump when he runs for office again. Snoop called the people who would vote for him “dumb motherfuckers” if they did.

Snoop continued, “Fuck everybody down with Donald Trump. I said it sure.

In a dig at The Brady Bunch, Snoop Dogg called black conservatives like Herman Cain, Paris Dennard, and Candace Owens “The Coon Bunch.”

Corporate media outlets like the New York Times are becoming increasingly concerned about President Biden’s cognitive impairment this weekend. Republicans have deemed Biden unsuitable for office and called for his resignation, including physician and Congressman Ronny Jackson (R-TX).

In a February interview with Fox News, Jackson asserted that he believes Biden lacks the mental capacity to perform the duties of the presidency: “I worked at the White House under the Bush era, the Obama administration, and the Trump administration.” I worked as the White House doctor for 14 years. I am fully aware of the cognitive and physical requirements for the position. I believe President Biden’s lack of these capabilities is currently on plain show for the entire nation and the globe to observe. He has just gotten worse and worse.