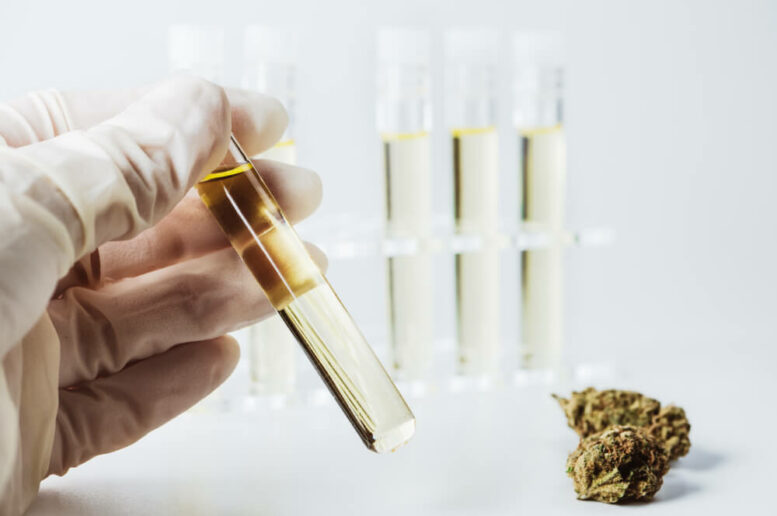 With THC crystals reaching close to 100 percent THC, you’d think that cannabis could not any stronger. That is until we came across stories about THC-O-acetate, another cannabinoid found in the cannabis plant. THC-O is said to be two to three times more potent than the THC we’re accustomed to.

THC-O-acetate is the acetate ester of THC. Until today, research on the cannabinoid is limited, but it was featured in a couple of studies between 1950 and 1980.

Technically, THC acetate is not a scheduled substance. However, it could be considered an analog of Delta-9 THC. The Federal Analogue Act of 1986 made it so that any analogs of THC would be considered federally illegal. It is currently unclear whether or not THC-O fits the criteria.

Between 1949 and 1975, the U.S. Army Chemical Crops conducted human experiments at the Edgewood Arsenal facility in Maryland. THC acetate ester was used on dogs to test the substance’s potential as a non-lethal incapacitating agent. Researchers found that it had twice the ability to throw off dog’s muscle coordination when compared to delta-9 THC.

According to Donald A. Cooper of the DEA, THC-O-acetate was first encountered by the administration in 1978. That year, they came across THC-O-acetate extracts in Jacksonville, Florida.

Since that encounter, DEA laboratories have never seen another sample of the acetate. There was talk of classifying it as a controlled substance analog. However, 10 years later the suggestion was dropped since the THC acetate they found ended up being an isolated incident.

The cannabis concentrate was made using a Soxhlet extractor. Cooper noted that the THC-O-acetate the DEA found was made using the same technique that turns morphine into heroin.

The extract had been acetylated with acetic anhydride, and in the final step, the excess acetic anhydride removed by distillation. The product contained neither quantities of nonderivatized cannabinoid nor any identifiable plant fragments

The man arrested seemed ahead of his time. A similar case was reported in June of 1995 in the United Kingdom when a person using D. Gold’s book Cannabis Alchemy to make the THC acetate was convicted.

The effect of the acetate is more spiritual and psychedelic than that of the ordinary product. The most unique property of this material is that there is a delay of about 30 minutes before its effects are felt,

A review of the active principles of the cannabis plant found that natural THC acetate was approximately twice as potent as natural THC from cannabidiol.

According to Michael Stark in his published book Marijuana Chemistry: Genetics, Processing, Potency, THC-O-acetate is 300 percent stronger than the psychoactive THC we are used to.

THC acetate isn’t as simple to extract as something like butane hash oil. Acetic anhydride is highly corrosive and just as flammable as gasoline. The process can involve other dangerous-to-use solvents as well. Few people are making it, so don’t expect to see THC-O-acetate on the shelf of your local dispensaries anytime soon. Further, the legal status of THC-O-acetate is unclear to this date, and we’re not even sure if having it in your urine would lead to a positive drug test result. Since there isn’t much research involving THC-O-acetate, we’ll have to wait until it is more accessible to find out more.

One response to “THC-O: The Secret Cannabinoid 300 Percent More Potent Than THC”