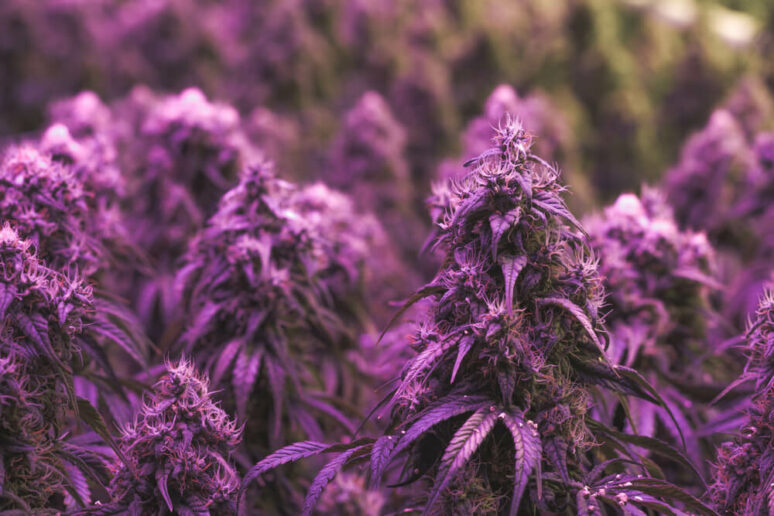 Nothing stands out on the shelves of a dispensary more than the stark contrast of the deep, dark purple buds of a beautiful strain of colorful cannabis. As a budtender, expect your customers to stand in awe, gazing at the trichomes and a kaleidoscope of colors. But what actually causes marijuana to change to purple?

Like most plants, cannabis is generally green in color due to green hue of chlorophyll, the chemical which helps plants turn sunlight into nutrients. Color itself, is just the reflection of white light through pigments, which can give off an array of color. While chlorophyll creates a green hue, purple strains of bud contain more anthocyanins.

Anthocyanins, a group of nearly 400 types of pigment molecules, are flavonoids, one of the three main chemical groups which compose cannabis including cannabinoids and terpenoids. Anthocyanins are responsible for shades of red, purple or blue. First classified by a German botanist called Ludwig Marquart in 1835, the name derives from the Greek word “anthos! meaning flower and “kyanos”, meaning blue.

There are three things to consider if bringing color into your marijuana grow:

Anthocyanins are common in berries, flowers and fruits, but also in leaves, stems and roots. Anthocyanins are not produced throughout the plant’s lifetime, but only in the last weeks of flowering, when chlorophyll production starts to shut down.

Genetics play a role in producing purple buds, they aren’t the only factor involved. A strain which produces more anthocyanins helps produce purple buds, but with no guarantee of success. The right environmental conditions are also necessary to coax out those purple hues. Choose a strain that has higher-than-normal anthocyanin content, including Blueberry, Purple Urkel, Granddaddy Purple, Blackberry, Purple Kush, Purple Haze, Original Flo, Purple Trainwreck, Querkle, and Deep Purple.

Colder temperatures not only shut down chlorophyll, it boosts anthocyanins too. Just like trees, which turn from green to red and yellow in the fall, the cooler temperatures instruct the plant to produce greater amounts of anthocyanins.

Although, little research has been done on vaporizing or smoking anthocyanin, using purple cannabis in your edible recipes may have significant health benefit. According to an article published in Today’s Dietician, anthocyanin is being reviewed as having potential health benefits. In fact, anthocyanin is the reason why red wine is said to help reduce cardiovascular disease and coronary artery disease. An in-depth Iowa Women’s Health Study of nearly 35,000 women over sixteen years showed a link between consuming strawberries and blueberries once and a reduced risk of death from the two diseases.

Other conditions which may be prevented with anthocyanin include hypertension, myocardial infarction, arterial stiffness, cancer, and even to improve cognitive function.

While purple strains are rare they are gaining popularity in the legal market.