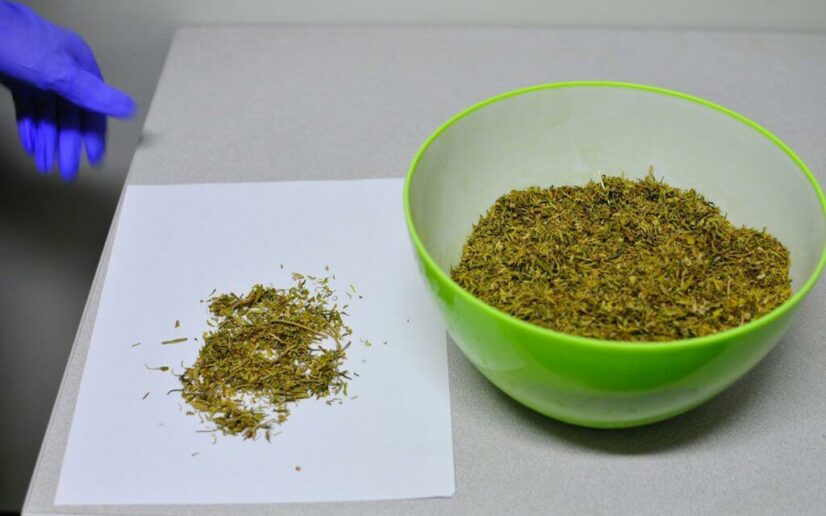 If a researcher is currently looking to work with cannabis— to say, investigate how it impairs people, or how it could help people suffering from specific ailments — they do not have access to top-shelf weed that we are smoking (or at least the ones living in a legal state).

To investigate the real-world effects of cannabis, however, researchers need a product that looks and feels like the real thing. And they’re increasingly frustrated with government weed that is something else entirely. As you can imagine, it makes a huge difference whether the cannabis grown has 3% or 25% THC.

The photo below shows a sample of federal marijuana distributed to Sue Sisley, a researcher who just embarked on a first-of-its-kind clinical trial to test the efficacy of medical marijuana for military veterans who have PTSD.

Here they are side by side:

A glance confirms it looks nothing like the commercial marijuana depicted above. While the real stuff is chunky and dark green, the government weed is stringy and light in color. It appears to be full of stems, which most consumers don’t smoke. If you want to find out how to make sure you got quality cannabis, check out our guide.

We reviewed over 150 different strains by now, and judging from the pictures, this is not a usable form of cannabis. It’s a lot worse than what you get on the streets, and we’ve never seen anything that looks as bad as this. If you want to experience the effects, you want to get your hands on the flower of the plants and not stems, leaves, and seeds.

So far, it’s unclear if this is a horrible batch, but there’s a reason to strongly suspect it’s typical of what most researchers are given.

For a researcher, it’s difficult to assess the real-world impact of high-end cannabis if you only have access to the low-quality stuff. It’s akin to investigating the effects of bourbon by giving people Bud Light.

One thing is for sure; the government weed doesn’t pass muster if you want to know how cannabis use affects people in the real world. Or if you’re going to run highly controlled medical experiments, like the one Sisley and Doblin are working on. It’s not even tested for some common contaminants, like yeast and mold, that many states now check for as part of their regulatory regimes.  We think it’s pretty straightforward, you either get quality flowers, or you don’t have to do any medical testing at all.

How do you see that? Let us know in the comments!