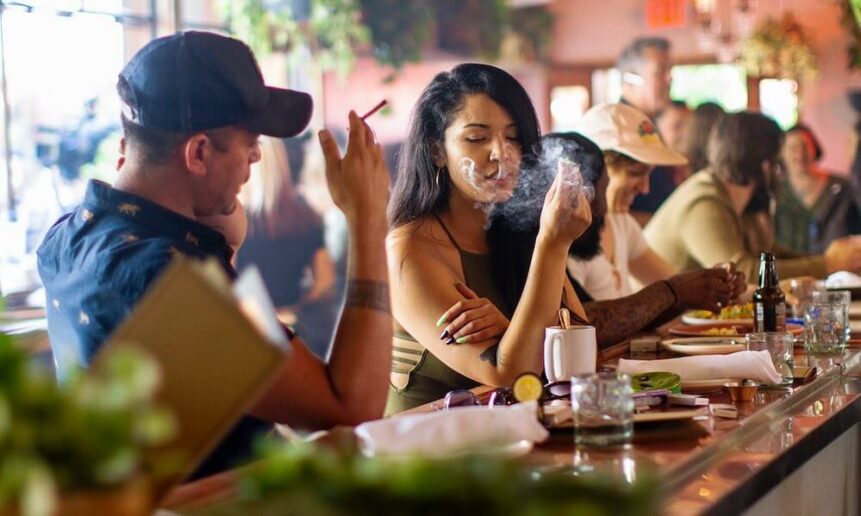 Most of us have gotten high before going to a restaurant. A ton of us have gotten high in the walk-in freezer while working at a restaurant. But how many of us can say we’ve smoked a joint while eating in a restaurant? Unless you’ve been to Amsterdam or you count hot-boxing in your car while sitting in the drive-thru at McDonald’s, then it could be time for you to get yourself to West Hollywood, California, and book a table at Cannabis Cafe to see what the fuss is about.

• Three Nights (and a Day) In Amsterdam Coffee Shops
• Weed Hangover – Can Cannabis Cause Hangovers?
• A Dozen People Were Hospitalized After Eating Weed-Laced Paella

How’s it work? Patrons are greeted at their table by a “flower host” who asks about their experience with cannabis and makes a recommendation from the restaurant’s extensive marijuana menu. The diner can order pre-rolls, flower, even concentrate and it will be brought directly to their table. Patrons can also bring their own weed and smoke it – but there is a $30 “tokeage fee.”

As the restaurant’s website says, “our cafe offers tourists and locals the opportunity to experience cannabis in a sociable, restaurant-style atmosphere. There hasn’t been anything like this in existence for over 100 years, dating back to pre-prohibition era cannabis tea pads. We’re excited to set the standard on what a US-based cannabis cafe is, and share this rare experience with our like-minded (and inquisitive) cannabis community.”

And in case you were wondering, the restaurant also has a wide variety of smoking accessories available for use. According to the restaurant’s website, the current inventory includes 75 bongs, 35 pipes, and 30 vape pens – all of which are cleaned and washed after each use, much like the cutlery and glassware at a regular restaurant.

Now, here’s where it gets tricky. The restaurant is not allowed to actually sell any edibles and none of the food on the menu has THC or CBD in it. Instead, you can buy your own edibles to add to the meal, or just order weed from the flower host and get high quicker. Also, dining times are limited to an hour and a half anyway, so if you do take an edible, it might only be just kicking in when it’s time to get the bill, and then you’re just stoned sitting out on the curb like on a typical Tuesday night.

The restaurant is also not allowed to serve alcohol, and food and cannabis sales are charged on separate checks, with all cannabis purchases made by cash only.

And what about the smoke? The restaurant installed a series of state-of-the-art air filtration vents throughout the restaurant and patios, to make it compliant with city ordinances and keep the smell of all that amazing weed (and food) from seeping out onto the street, the sidewalk, and the synagogue right across the road.

The restaurant opened as part of a collaboration between Lowell Herb Company and Chef Andrea Drummer. Lowell and the restaurant have since parted ways, though Lowell remains a small minority shareholder.

Drummer said the restaurant started with a farm-to-table concept with a strong focus on traditional comfort food. And while they aren’t legally allowed to infuse food with cannabis, they do pair a lot of the menu items with specific strains that are sold on-site.

For example, in a CBS interview from October 2019, Drummer recommended a pairing of Super OG Kush with either the vegan nachos or the hamburger. The recommendations are largely based on the terpenes and the flavors and aromas of the cannabis strain, though it’s arguably a bit laughable when you consider how low the bar is for “weed that goes good with nachos,” and vice versa.

The Cordon Bleu-trained chef also told a local Los Angeles TV station on the day of the opening that “we like to say we’ve simply replaced the wine with the weed. So if you like to consume [cannabis] in a communal space among like-minded people and not feel judged and have great food, that’s the experience.”

From anti-drug activist to cannabis trailblazer

It’s a pretty ironic career crescendo for Drummer, whose first job…was as an anti-drug counselor. In an interview with the BBC, she said she tried cannabis as a teenager but became paranoid, got into “a serious altercation” with a friend, and ended up getting 200 hours of community service. Afterward, she started working as an anti-drug counselor, “teaching the gospel of Just Say No.”

Years later, in California, she used CBD to treat her restaurant-induced Sciatica and turned over a new leaf. She started making cannabis-infused meals for private clients like Wiz Khalifa and Miguel.

In October, Drummer told Vogue that “a great part of my work has been the educational component, education consumers nay-sayers and doubters, and people who still have the misconception that cannabis is a bad thing.”

This is fairly easy when the clientele is Wiz Khalifa, but it may take more to impress a Cannabis-skeptic potential client base, who might care more about the food than the herb.

The cafe’s menu is chock full of comfort food like chips and guacamole, homemade corn dogs, and taco fries – all of which sound like great stoner appetizers. The entrees include chicken tenders, four types of hamburgers, pulled pork, and Ceasar wraps and salads.

Now, about the weed. The menu is ten pages long, and there are dozens of strains on offer from all types of growers. The prices, though, are not, how do we say, cheap. A 1 gram pre-roll of Lemon Tart Pucker is listed for $34, and most pre-rolls range from about $14 to $25. You could also opt for a 1.4 gram joint of Lemon Sherbert for $45. Your best bet though, is just to buy an 1/8th of flower and roll it yourself – they range from $60-$85.

Pretty soon, the Cannabis Cafe may just be one of an assortment of similar establishments in Los Angeles.

In December 2018, the West Hollywood municipality approved a list of cannabis businesses, including eight that allow consumption of edibles and eight consumption lounges/cafes where smoking, vaping, and edibles can be consumed on-site. Also, in January, Alaska became the first state to approve retail stores where customers can smoke or consume marijuana on site.

For the rest of us, the Jack in the Box drive-thru is open 24/7, and you can’t beat the prices.