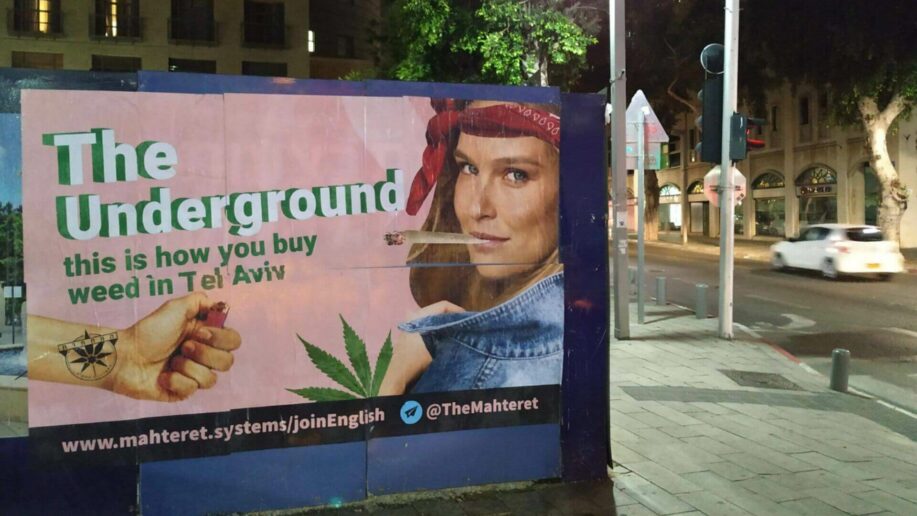 Notes from the Underground: How to Buy Weed in Tel Aviv During COVID-19

As part of our coverage of the COVID-19 pandemic and how it’s affecting the world of cannabis, we’re taking a look at the situation in countries around the world. In this edition, International Highlife’s Ben Hartman examines how the virus is affecting the marijuana black market near his home in central Israel.

In times of war, many Israelis pride themselves on their ability to mobilize as a country and face a common threat, to put aside the countless internal Israeli feuds to unite – if only temporarily. This time around, facing a pandemic, countless Israelis have fallen in line to fight the COVID-19 menace the only way they know how – by staying at home and getting high all day long.

And for that, “The Mahteret” is more than happy to oblige. Founded in 2014, the Mahteret (“the Underground” in Hebrew) is a members-only black market cannabis delivery and pick-up service with more than 15,000 members across the country. Since the COVID-19 stay-at-home regulations went into effect in mid-March, business has been booming for the marketplace, to put it lightly.

“It’s a lot busier, we’re seeing 200% increase in sales in the past month or so,” Israel (not his real name), the CEO of the network said. “People are ordering bigger amounts and also, they order more often. People are at home with nothing to do all day but get high and watch TV.”

Unlike the dozens (and dozens) of Israeli marijuana (and cocaine, pills, hallucinogens, and beyond) dealers that operate solely on the encrypted messaging app Telegram, the Mahteret operates mainly on WhatsApp and by using Google Docs — as well as Telegram. Members are recommended by other members, and it’s less of a free-for-all than a lot of the Telegram-based groups and individual dealers. (They also have an Instagram page: @mahteret.systems)

The service offers morning, afternoon, evening and late evening delivery rounds, with deliveries “from Metula in the north to Beersheba in the South,” the service says, describing two cities on opposite ends of the country. They also operate “pickup stations” in Tel Aviv and several of its major suburbs and nearby cities, as well as in the suburbs outside the northern city of Haifa where a surprising amount of dealers live. 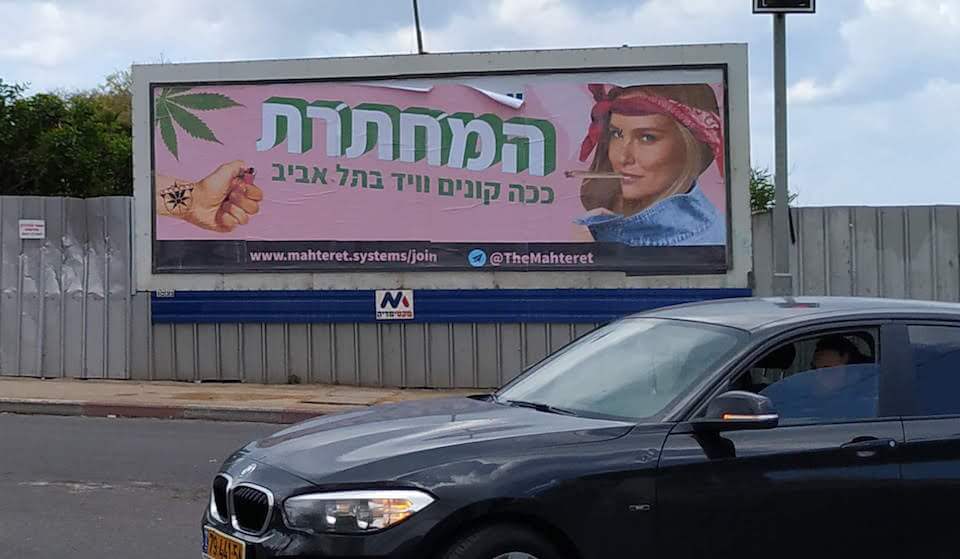 A guerrilla campaign by the Mahteret used a photo of Israeli model Bar Rafaeli to promote its services in Tel Aviv.

Since the coronavirus outbreak began to worsen in early March, each day’s text message has featured the daily specials, as well as disclaimers such as “in the event that there is a worsening of the restriction of movement due to the situation, there could be disturbances in our operations and distribution. In keeping with this, we suggest that you stock up while you still can.”

Recently messages merely end with “as of now, and as long as it is possible from an operational standpoint, our service will continue like normal despite the corona danger,” but on Monday there was a more instructive note that read “dear friends, our drivers are risking their health and that of their families in order to do their job. Please, protect them and yourselves: wear gloves and masks and try to get as far away from the window of the driver’s car as you can. And if you’re in isolation, send someone else on your behalf.”

In keeping with the pandemic theme, the daily code words have ranged from the random and non-sequitur to much more timely ones like “alcogel,” “quarantine,” and “curfew.”

‘The drivers are scared’

How are they actually operating though? According to Israel “the drivers work with gloves & masks (supposedly), and try not [to] cough on anyone, lol.”

He then took a much more serious tone in his texts.

“The drivers are scared. Some of them have decided to take a break and return when everything is over and we don’t make any driver work if he doesn’t want to. Most of our drivers though are very brave and also understand the importance and cruciality of what they do. As you know, Israel is a nation of soldiers and most of our drivers have a military background so they take this in a very heroic approach.” 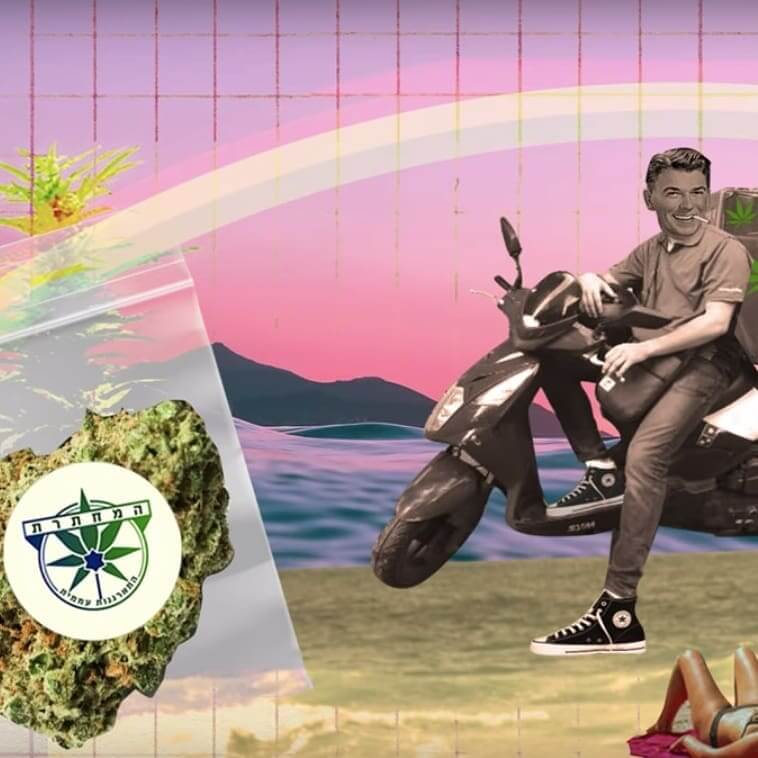 Heroism aside, there are also the economic factors in a country where the unemployment rate has soared from less than 4% prior to the COVID-19 pandemic to more than 22% as of Sunday.

“Also, they [the drivers] appreciate the fact that while about a million people lost their jobs they can still take care of themselves and their families,” Israel notes.

The Mahteret is fairly unique among Israel’s online weed markets in that it allows users to apply for jobs within the organization. By clicking on “submit your candidacy for a job,” members can apply to work in pick-up stations, as delivery drivers, marijuana packers, growers, and in “marketing,” “technology,” and “management.”

The online form also includes the classic job interview question “what added value do you bring to the organization?” (Thankfully, it does not ask “what would you say is your greatest weakness?”)

“Sadly a lot of people applied for jobs, more than 3-4 times than usual,” Israel wrote, adding “everybody is in trouble with this corona thing.”

Israel, a married father of two in his late 30s who lives in Tel Aviv and has a day job in hi-tech, said that the organization has still not figured out how to go cashless, so, for now, drivers still have to accept cash payment hand to hand despite the risk of infection. (Their weed comes in sealed, airtight branded bags, not plastic baggies).

‘Green is the queen’

And who are the customers? As Israel puts it “you can’t really define who the members are. We have members of all ages, genders, and from any community in Israel,” including liberal Tel Avivians, ultra-Orthodox Jews in Jerusalem, the residents of Arab villages across the country, and soldiers on isolated army bases.

And what are they looking for in this age of quarantine? The Mahteret offers three grades of marijuana flower (“greenhouse,” “deluxe,” and “boutique”), hashish, edibles, pre-rolls, and resin. In a time of war though, there is one product that clearly stands out above all others.

“Green is the queen,” Israel texts with a smiley. 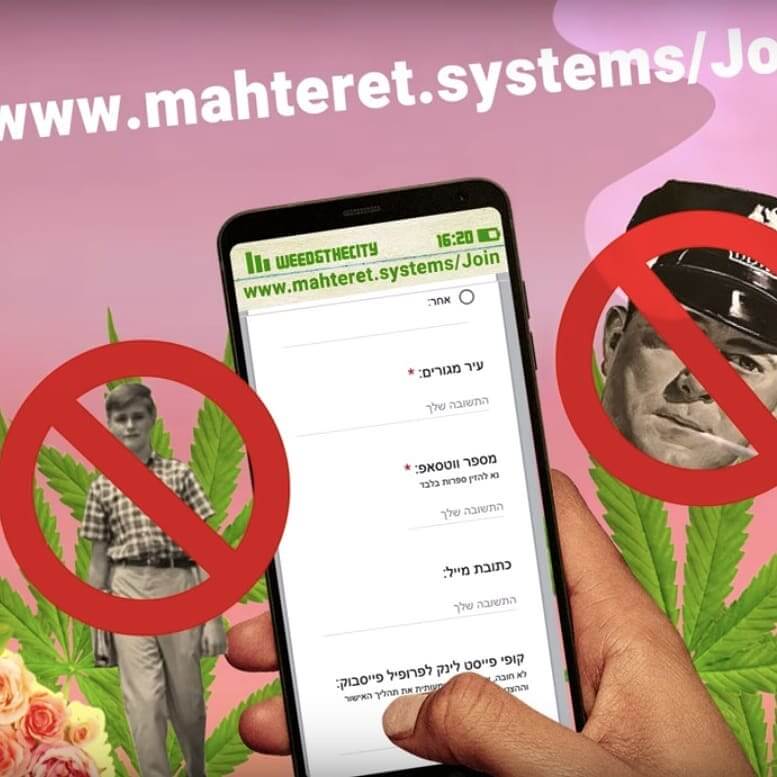 No cops or kids are allowed on the platform (Photo: Mahteret Systems)

The service has also not resorted to the sort of price gouging seen in other industries, which can also be said for the more small-time dealers on Telegram. For instance, on the Mahteret, daily deals include 20 grams of “greenhouse” for 1,000 shekels ($276), 20 grams of “boutique” for 1,500 ($415) or a combo deal of 5 grams “deluxe” and 5 grams “greenhouse” for 600 shekels ($166). This in a country where just a couple years ago a single gram of high-grade marijuana could easily sell for more than 100 shekels ($27).

By and large, prices have remained what they were before the crisis, and in some cases, dealers have slashed prices considerably, perhaps out of fear that they’ll be stuck with their merchandise if the closures become truly severe.

Israel said the Mahteret does have contingency plans in the event that this does happen, for instance, if police roadblocks restrict movement across the country. He did not reveal any tricks for how they plan to evade police on their delivery rounds though.

“We have a plan, but since we have no idea what we’re about to face, we really try to adapt to what’s going on [on] a day to day basis,” he said, adding “in theory, our drivers [are] supposed to overcome a random encounter with the law enforcement, but in real life, it’s always a very unexpected event and it really depends on the driver state of mind.”

In Israel, while medical marijuana is prescribed to tens of thousands of patients, cannabis remains illegal for recreational use. In the United States during the COVID-19 closures, states with legal marijuana programs have allowed cannabis dispensaries to remain open as essential businesses, giving many legalization advocates reason to believe that the crisis could help pave the way to federal legislation.

Could the crisis also help the legalization cause in Israel? 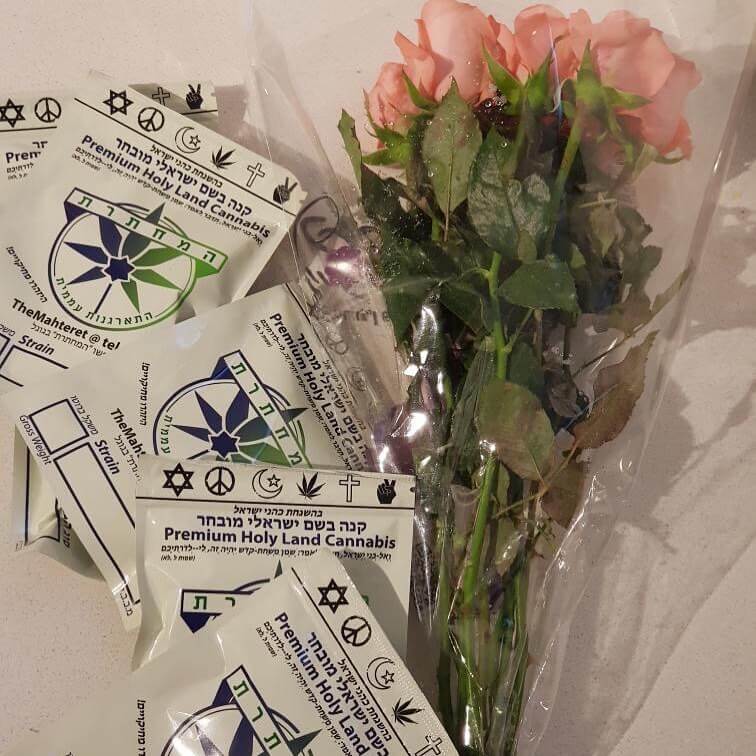 When was the last time you spontaneously brought home flowers? (Photo: Mahteret)

Whatever happens, the Mahteret “like to look at ourselves as a soon-to-be legitimate business,” Israel texts, on day 22 — and counting — of the coronavirus lockdown in Israel.

On Tuesday, the night before the Passover holiday, the government put new closures in place. From Tuesday night at 7 pm until Friday at 6 am, no one is allowed to leave the town they live in except for “necessary services.” From Wednesday at 3 pm until Thursday at 7 am going to the store for supplies will be banned as well, and people must stay within 100 meters of their home.

As the new closures were announced Tuesday morning, the Mahteret sent out the day’s menu with a note “the final time to order until Saturday night (at least).”