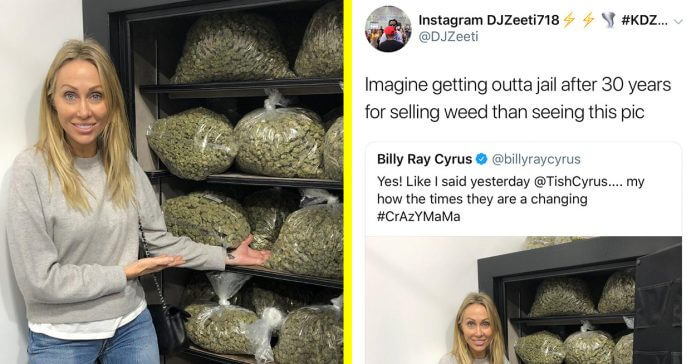 As you know, Miley Cyrus smokes weed and she is not hiding it! After she took a break from the herb, she told the media her mom got her smoking weed again.

Now the superstar’s mom, Tish seems to follow her footsteps as a photo of the 51-year-old standing in front of a locker full of cannabis shows.

Miley’s father, Billy Ray Cyrus, posted a snap of Tish with her hands pointing to the large bags of marijuana with the caption: ‘Yes! Like I said yesterday @TishCyrus…. my how the times they are a changing #CrAzYMaMa.’

It’s great that she posted a picture of all that weed. However, the picture sparked a debate online about white privilege and the American justice system, as many people of color are still incarcerated for marijuana-related charges.

One follower summed it up with a quote from actress Cynthis Nixon in a speech during her run for New York governor:

We have to stop putting people of color in jail for something that white people do with impunity.

Yes! Like I said yesterday @TishCyrus…. my how the times they are a changing #CrAzYMaMa pic.twitter.com/tfvbGYC0Oc

Here are some of the comments:

“No wonder why your children are so stupid to take drugs, because you are a stupid role model,” read one comment. “The police should put you and your family in prison.”

“No wonder why your kids are out of control,” agreed another commenter.

“I know Billy Ray confesses to be a Christian,” one fan added. “Billy Ray your family is so involved in worldly things. I’m praying God [leads] you back to him … I’m praying for y’all.”

Other critics objected that the photo demonstrated white privilege, arguing that the Cyruses could proudly show off a large haul of weed without repercussion, while countless others — including people of color — are incarcerated for drug crimes.

“Meanwhile minorities are being thrown into jail for this,” one critic fumed.

“It’s always ‘hip’ and ‘cool’ when white people do it, but when black people do it, it’s ghetto, encourages gang violence and is worthy of being jailed,” another pointed out.

“Cops have tracked down and arrested people of color for taking pictures like this but hardly waste any time doing the same to white folks,” added a commenter.

7 responses to “Billy Ray Cyrus Gets Slammed For Cannabis Photo”