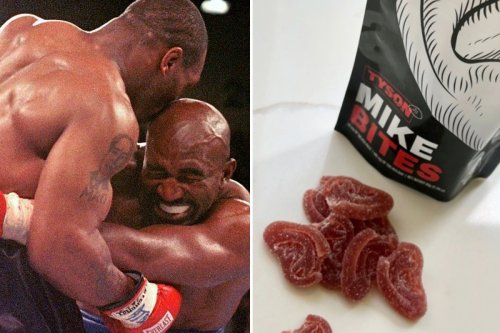 Mike Tyson’s weed company is making edibles in the shape of an ear. I repeat, Mike Tyson has decided to sell edibles with a chunk missing in a nod to biting Evander Holyfield’s ear off.

The 55-year-old former heavyweight champion, who has been selling cannabis products since 2016, is believed to earn around $1 million per month through his business that offers premium cannabis flower, pre-rolls, beverages, and extracts, amongst other products.

In fact, ‘The Baddest Man On The Planet’ is even the owner of a 420-acre weed resort near Desert Hot Springs in Southern California, where cannabis is legalized.

Tyson has made a huge amount of money with weed, and just recently, he launched edibles in the shape of an ear called Mike Bites.
We posted the product on our Facebook page yesterday, and the post went viral with over 20,000 shares 10 hours after posting. You can check the post here.

Mike Tyson’s weed company is making edibles in the shape of an ear. Genius pic.twitter.com/VOU3uAMzOf

The edible is, of course, about Tyson being disqualified for biting a chunk out of Evander Holyfield’s ear during their WBA Heavyweight Championship title clash in 1997.

Tyson was fined $3 million by the Nevada State Athletic Commission for his actions and didn’t fight again for over a year, while doctors performed a 90-minute procedure to try and save Holyfield’s ear.

The bizarre incident is still discussed to this day, but despite the shocking nature behind the ear bite, the pair have since patched up their differences. You can rewatch the crazy scene below:

Mike Tyson gets disqualified after biting Holyfield’s ear in their rematch. 🥊

Holyfield revealed that he is ‘glad’ Tyson bit his ear 24 years ago and that he holds no grudges against his former rival.

“It don’t bother me. It cost me a lot of grief but I’m glad it happened because it gave me an opportunity to talk about what forgiveness is,” he explained.

“If somebody breaks into your house you don’t think, ‘How can I break into theirs?’ People don’t know that Mike is a lot more knowledgeable than they think.

“They think he is crazy, but he’s a businessperson now. You can’t be the same way when you get older.”

Tyson, meanwhile, opened up about the incident in 2020. “I bit him because I wanted to kill him. I was really mad about my head being bumped and everything,” he told Fox News.

“I really lost consciousness of the whole fight. It took me out of my fight plan and everything.”