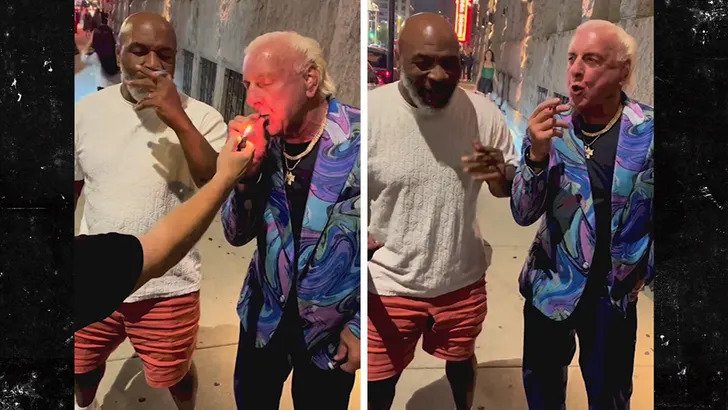 Tuesday night, after attending a cannabis conference in Chicago, Mike Tyson and Ric Flair shared a blunt and judging by the video, it was some GOOD stuff, so they were on cloud nine!

The Nature Boy and Iron Mike appeared in a video clip showing smoking blunts, laughing, and lighting them on camera.

“Smoking That Ric Flair Drip With @miketyson All Night Long! WOOOOO!” The video has captions by Flair.

Earlier this year, Tyson and Flair joined forces with Mike to form “Tyson 2.0,” and they also worked together on Naitch’s “Ric Flair Drip” cannabis brand.

Flair and Tyson smoked several blunts on stage during the conference, where Mike and Ric promoted the advantages of smoking weed over taking painkillers like Xanax.

During the event, Flair claimed that consuming cannabis was a much better way to deal with his body’s suffering due to the strain the wrestling business put on it.

This isn’t the first time the two legends blew down … Mike and Ric smoked with Rick Ross at a Benzinga Cannabis event in April — after the boxer famously beat up a man on an airplane.
Woooooooooooooooooo!!