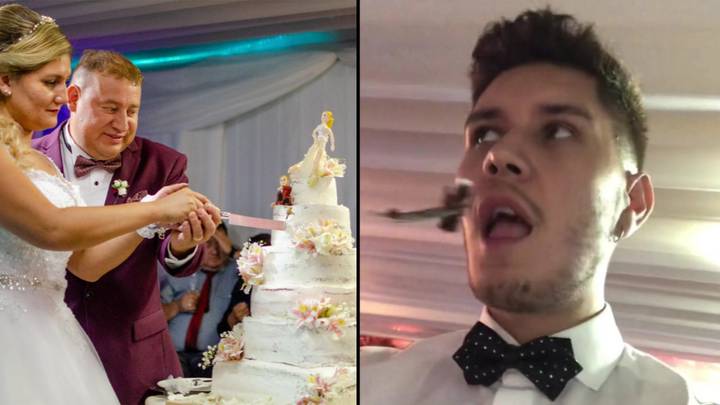 Wedding guests in Chile were high on more than love at a reception this year after the bride’s brother laced her cake with weed.

Watch how the party went here:

Alvaro Rodriguez, 29, from Santiago, Chile, created the multi-tiered wedding cake and celebrated with his sister when she got married in February.

Rodriguez made reference to the special ingredient in the cake, which read (translated): “The return of the magic brownie 2.0.”

Rodriguez spent 20 hours making and decorating the cake, which was covered in white icing and flowers and at first looked like an entirely regular, beautiful wedding cake.

We must make it clear that he made adult guests aware that one of the tiers offered the chance to get a bit more than a sugar rush thanks to the inclusion of weed, which is illegal for all production and public consumption in Chile, but legal for private-at-home consumption.

The baker explained the inspiration for the cake came after he and his sister tried ‘magical brownies’ and found the effect to be ‘very funny’.

He said he ‘didn’t think twice when his sister asked him to add weed to one of the tiers of her cake, saying that particular level took him ‘two hours and was pretty easy.’

“I just infused it with the butter from the day before and once the brownie set I put it with the other levels with chocolate ganache, and voila,” he explained.

Rodriguez assured the special layer was kept apart from the un-laced cake and was only served to adults, expressing the belief that cannabis cooking ‘should be normalized a little more, both in culinary and medicinal terms’.

Rodriguez said the ‘funniest reaction’ came from his aunt, who had been suffering from back pain prior to having a piece of the ‘magic’ cake.

“I remember her back hurt and two hours after eating cake her pain disappeared and she was up dancing like a teenager… [Cannabis] has incredible effects on those who might need an alternative, both for physical and mental health. ” Rodriguez said.

The idea of a laced wedding cake proved extremely entertaining to many TikTok viewers, with one user saying they were definitely doing this at their wedding while another joked: “Hahahaha everyone flew literally haha.”