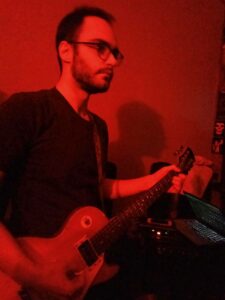 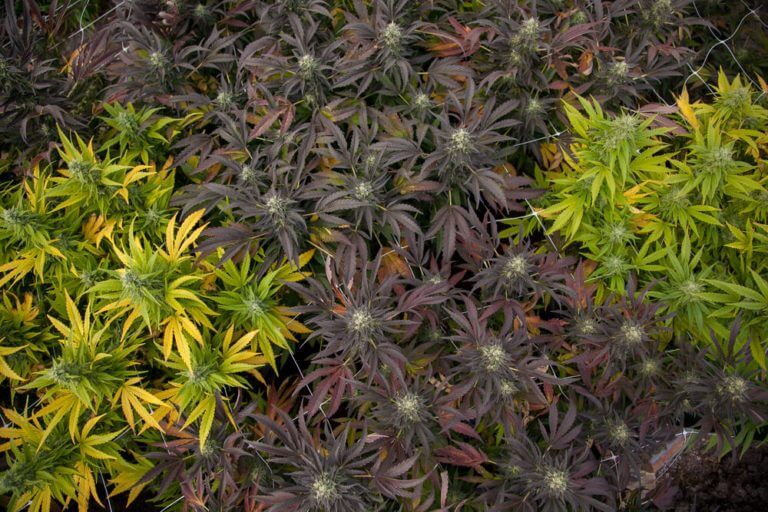 Why is Cannabis Sex Important

Knowing all about cannabis sex is especially important to growers, as male and hermaphrodite plants do not produce usable buds. What’s worse, when the time for flowering comes, the pollen sacks forming underneath the foliage will burst, pollinating nearby female flowers. From that moment on, the female flower will be unusable for recreational or medicinal purposes, as its potency and quality will be diminished.

Getting seeds instead of smokable buds is the no#1 disaster for the casual grower. Not only are you not getting to smoke your own marijuana, but you’ve likely spent a significant budget on it. Therefore, caring for your plants and making sure that no males stay in your garden will save you money and frustration.

When Can You Tell If A Cannabis Plant Is Male or Female?

It is impossible to guess the sex of a plant by looking at the seed. Usually, it is revealed in the later stages of the plant’s life. Somewhere between the transition from vegetative to flowering, the pre-flowers start to form. These tiny undergrowths are what will develop into the reproductive organs of the plant. Knowing how to read them will help you immensely, as you will be able to remove males well ahead of schedule.

Pre-flowers usually appear between the 6th-7th week from seed. Use a magnifying glass to take a better look: Male pre-flowers look like balls, while females calyxes are pear-shaped. During the vegetative stage, plants grow quickly and vigorously, while the flowering stage is when marijuana switches focus from root development to flower-growing.

If for some reason you are unable to tell each plant apart during the late vegetative period, don’t worry. You’ll have another chance after 1-3 weeks into the flowering stage (12/12 light cycle). Bear in mind that if a plant is kept in the vegetative stage for a long time, it will eventually grow pre-flowers. It is very useful that you become a pro at this, as it will help you grow much more weed in the long run.

In the following sections, I have included useful videos and images that show you how to distinguish male and hermaphrodite from female plants.

The first signs of a female cannabis plant are the pistils: Wispy hair-like protrusions that appear right where the buds are going to develop (usually between the main stem and the branch). A female plant might take a bit longer to show the first signs after changed to flowering but will start developing reproductive organs during the late vegetative period if kept on an 18/6 light cycle for longer.

Here are some examples of female marijuana pre-flowers: 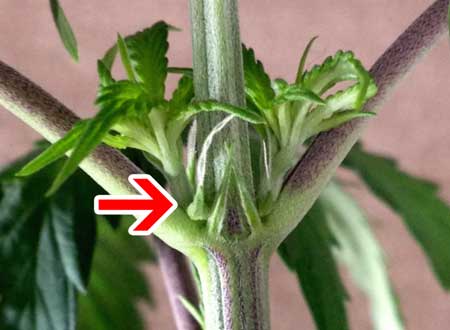 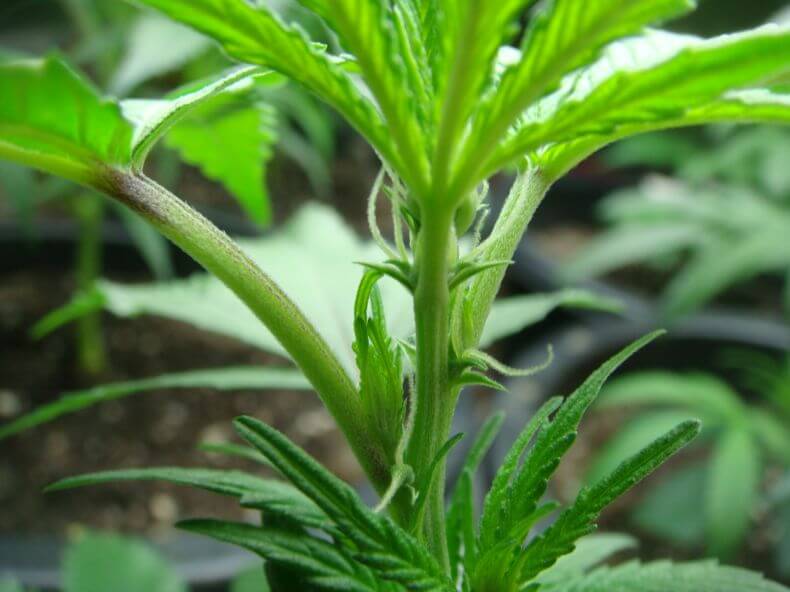 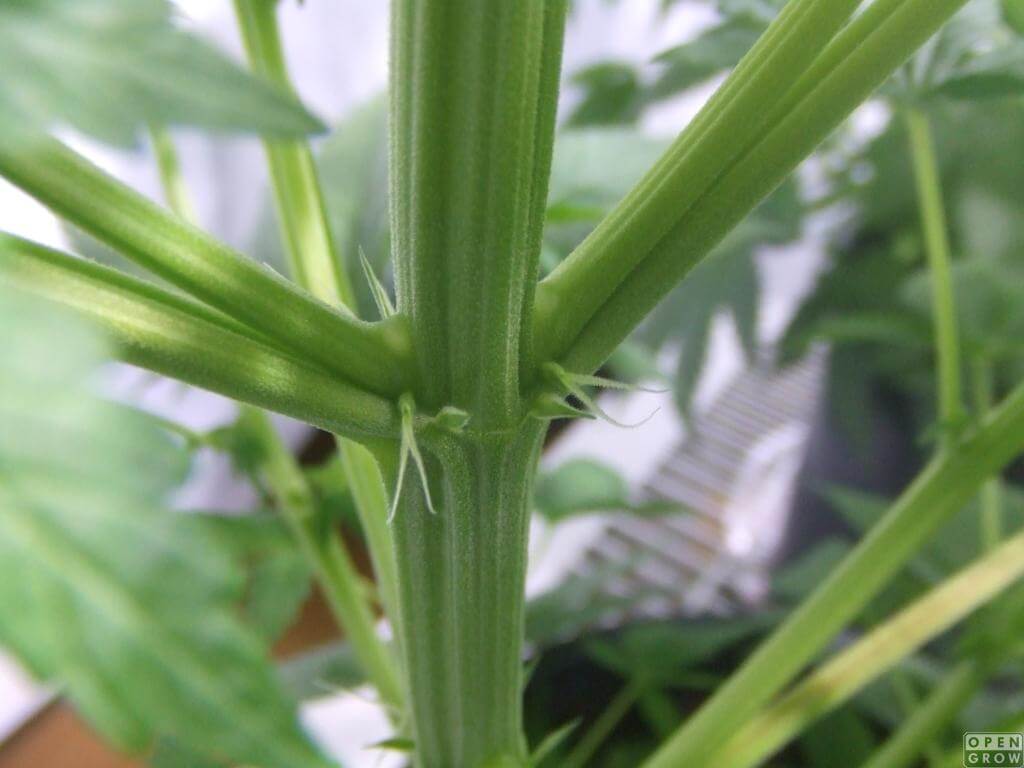 Pistils of a female cannabis plant

Especially during the early stages of flowering, it is easy to confuse a female pre-flower with a male. In that case, its shape should give you the answer: Females are more elongated and shaped like a pear. If you are still unsure, you can wait until the pistils start sticking out.

Distinguishing male plants is easy: Grape-like ballsacks and no pistils = male plant! These balls will start forming shortly after you switch to flowering. It is important to take them out ASAP to avoid them bursting open all over your female plants. Although male plants are not ideal for smoking, there are a few things you can do with them, as we’ll see in a later section!

Here are some photos of male marijuana plants for reference: 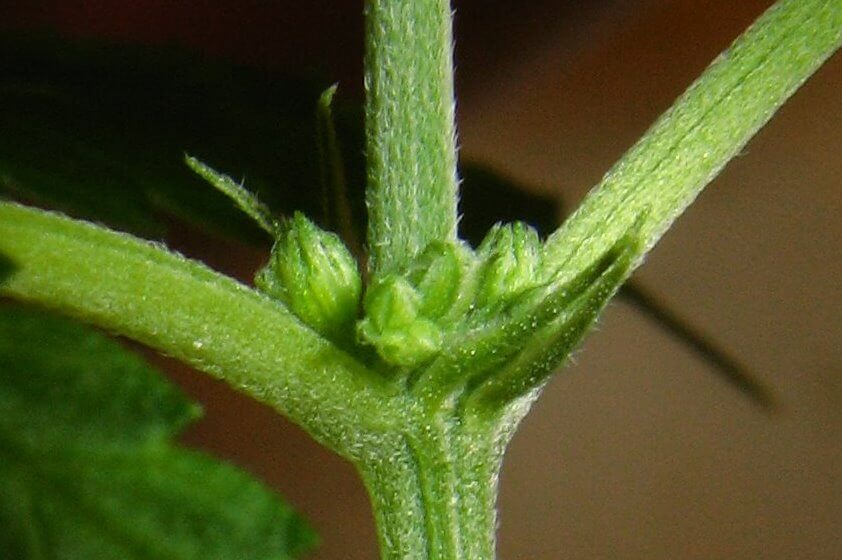 These balls are going to be filled with pollen really soon! 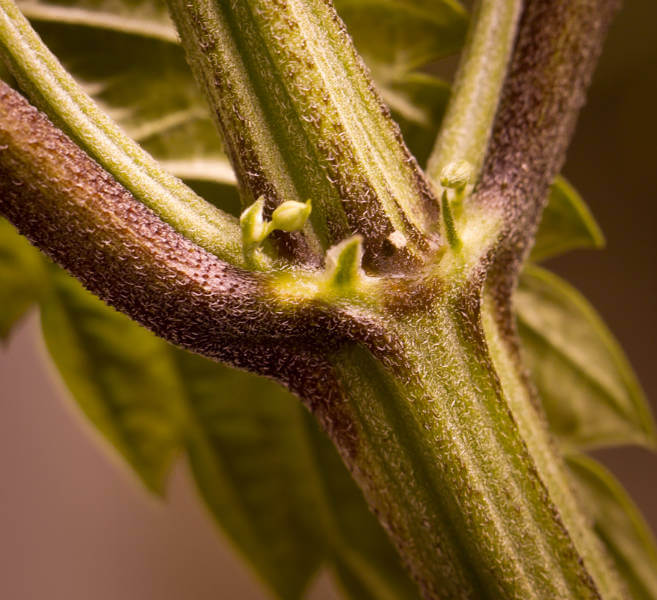 Even after you’ve removed all male plants from your garden, it is important to monitor them for signs of hermaphroditism closely. “Hermies,” as they’re called, can start to form quite unexpectedly, leaving you dumbfounded and with a garden full of seedy flowers.

Hermaphrodites can pollinate themselves and your whole growing area if you are not careful. What exactly causes them is still not verified, although stressful situations are the number one culprit: Abnormal temperatures, light leaks during the dark cycle or other extreme environmental factors can trigger hermaphroditism in marijuana. Whatever the reason for it, as soon as you spot hermaphrodite plants in your garden, you must remove them immediately.

Let’s see some photos and videos of hermaphrodite plants: 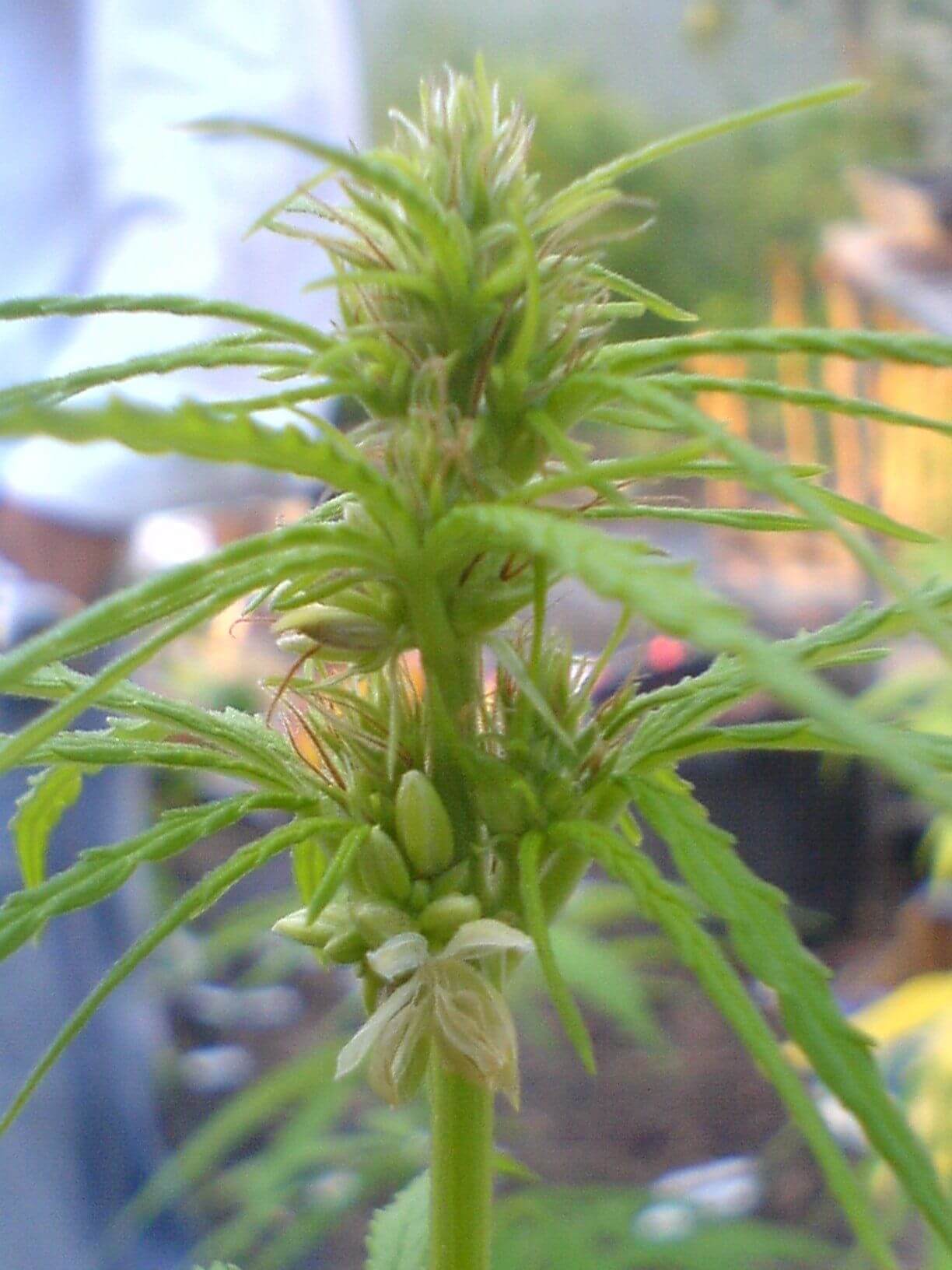 Hermaphrodite marijuana plants are just as dangerous as males!

On the next page, we will explain how you can get more female cannabis plants!

Marijuana writer and journalist. When I am not working, I spend my time playing music, working out, traveling, binge-watching stuff on Netflix and trying to stop my cat from chewing on my laptop cables.
https://bit.ly/2JadSDU
Everything You Need to Know About Smokable CBD Hemp Flower June 5, 2019
Is It Done Yet? When to Harvest Marijuana For the Best Results February 26, 2019
Learn About Growing Hydroponic Marijuana November 23, 2018
Cannabis Training Techniques: The Definitive Guide November 23, 2018
Three Nights (and a Day) In Amsterdam Coffee Shops October 6, 2018