Looters Are Clearing out Cookies, Dozens of Dispensaries - International Highlife 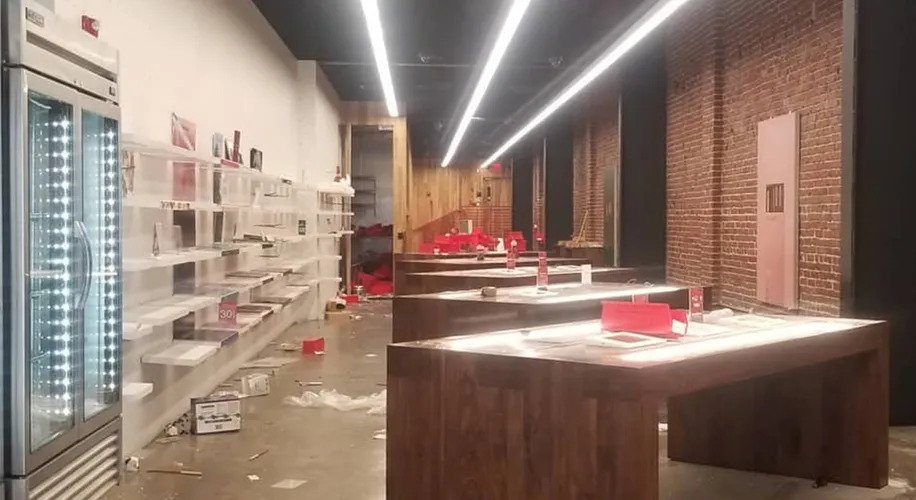 Looters Are Clearing out Cookies, Medmen, Dozens of Other Dispensaries Across the US

Cannabis dispensaries across the United States are falling victim to looters and in some cases even armed robbers using protests against police brutality and institutional racism as cover.

The protest wave gripping the US was sparked by the killing of George Floyd, a 46-year-old black man who was killed by Minneapolis police officers last week.

According to countless videos uploaded to social media, dozens of cannabis stores were broken into and ransacked.

Despite several of his stores being targeted by looters, US rapper Berner, the owner of the famous Cookies chain of dispensaries, said he supports the protest movement.

“It’s extremely unfortunate what happened to our store tonight on Melrose. But as a human living in the world today I can’t expect anything less until justice is served,” he said in an Instagram post.

I don’t expect everyone to understand what’s going on in the world 🌎 right now …. but I do ….

“We can rebuild our store but you can’t bring someone back to life. With that being said, we stand with what’s going on in the world, A statement needed to be made. I pray everyone stays safe and protects their family in a time like this.”

“How can I worry about a store when there’s so much happening in the world right now? So much hate, so much anger, so much pain and a lack of justice. Please take care of your families and stay safe.”

In Oakland, Magnolia Wellness was among a number of stores that were hit by armed robbers using the chaos as cover. Owner Debby Goldsberry posted the following statement on Facebook:

“Our shop can be rebuilt, but the black lives taken by the police, again and again, are gone forever. Simply put, the police are murdering people right before our eyes, and the anger has boiled over. We saw it on camera, watching these men rampage through our space.

Attacks on dispensaries weren’t just focussed on the West Coast. In Cleveland, Ohio, Rise medical marijuana dispensary was also cleared out, as was The Herbal Care Center in Chicago.

A number of other dispensaries across the US met a similar fate.

The protest movement sweeping the US first started in Minneapolis where Floyd was killed and quickly spread to almost every major city in the country.

While the protests have remained peaceful for the most part, violence has broken out in many cities, often instigated by masked attackers with seemingly no connection to the protest.

B-Real from Cypress Hill, who owns six Dr. Greenthumb’s shops in California, called on people “protest peacefully and remove the instigators that aren’t there in the name of George Floyd.”

Today as a country we hit a low point. Rioting, looting and burning down business all during a pandemic isn’t going to make the change needed. It will only set us back. Protest peacefully and remove the instigators that aren’t there in the name of George Floyd

The management of Sweet Flower posted an Instagram photo thanking customers for their continued support and declaring the shop’s “solidarity with those fighting against social injustice.”

A message to our community ❣️🌸