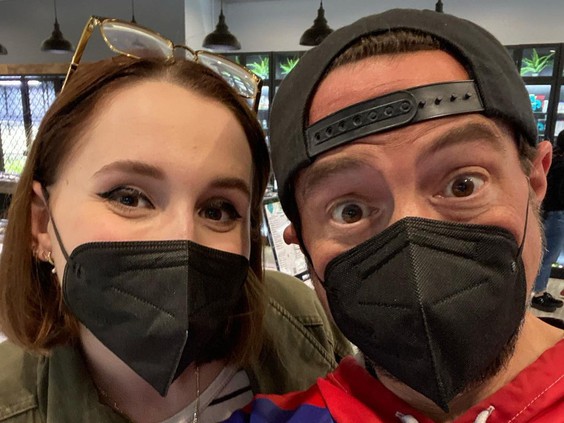 As you all know, comedian and filmmaker Kevin Smith is no stranger to weed.

The 51-year-old developed a cult following for his portrayal of loitering weed dealer Silent Bob in Clerks before going on to direct Dogma and Chasing Amy , among other films. He also lent his voice to the legalization movement in New Jersey .

It’s no surprise, then, that Smith frequents the dispensaries in his home state. Turns out, his daughter does, too.

Smith took to Instagram to document the chance meeting with Harley Quinn Smith, 22, who recently moved into her own house.

“When you’re at the weed store and you run into your kid. Since @harleyquinnsmith got her own house, there have been moments when I ran into the kid by chance out in public,” Smith wrote. “And tonight, after I ran into my only begotten daughter at the weed store, I was like ‘Someone raised that kid right.’”

For her part, Harley responded, “It was a surprise but also not a surprise at all.”

The duo is used to spending time together, as they revealed to E! News in June they are currently co-writing a series, though details remain scant.

“It’s such a cool gift to be able to work with somebody you’re related to,” Harley told E! News . “We have pretty similar minds, so it’s kind of like you’re shooting with another version of yourself. It’s so much fun and we’re working on another thing together now which has been, in my opinion, the most fun yet, and I can’t wait for us to be able to share with the world what that is.”

During an appearance on Jay Baruchel’s Highly Legal podcast last year, Smith revealed that, despite his Hollywood portrayals, he really didn’t start consuming cannabis regularly until 2008. That’s the year he became “a full-blown, wake-and-bake stoner and it’s been that way ever since.”

Smith was clear, though, that his affinity for the plant hasn’t slowed his productivity.

“I do more sh*t now than I ever did. I spin so many f***ing plates,” he told Baruchel. “I said, I can’t just be a guy who lights up and kicks back and watches South Park . If you’re going to smoke as much as you seem to enjoy this, like you have to tie it to productivity.”