How to Smoke Hash in a Cup: Stoner 101 - International Highlife 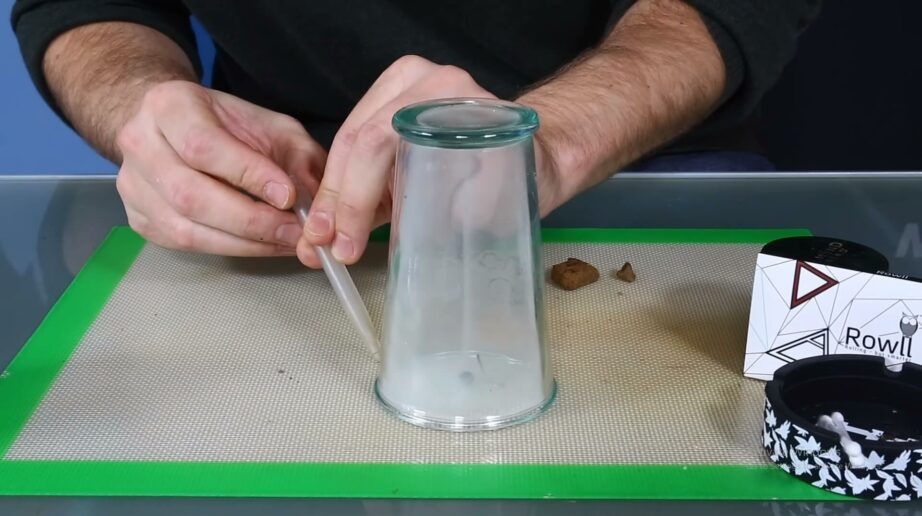 By International Highlife June 10, 2020
Guides hash how to stoner 101 #stoner

Did you study abroad in Europe? Were your parents stationed on a military base on the continent? Were you a foreign mercenary based out of North Africa? If you answered no to these questions, then you may not have much familiarity with hashish. Like universal health care or legal repercussions for police brutality, it’s still not such a big deal in the United States, even as it has long been one of the world’s most popular ways of getting high.

But why? And what is hashish?

Brown Gold. Tootsie Roll. Brown Bobby. Brown Frown. These are all slang terms we just made up for hashish, which is a cannabis concentrate made from cannabis resin glands – or “keef” – that have been pressed into a block.

Hash can be dark or light brown, yellow, or in the case of Indian Charas – black.

It’s perhaps the oldest way to smoke marijuana and is still often the preferred way of getting high in Europe, North Africa, the Indian Subcontinent, Nepal, the Middle East, and beyond.

I have weed, why should I smoke hash?

When it comes to the “why” of smoking hash, it’s really just a matter of preference. Because it’s a concentrated form of cannabis resin, there is more THC per gram of hash than flower, but because you only smoke a small little piece each time, the high is typically more mellow and less potent than with high-grade flower.

Hash also has a different taste than flower, more earthy, and….hashy. It can also be spicy, sweet, or taste like pine, and it depends a lot on the terpene profile of the cannabis used to make the hash.

Another reason to go with hash is that it’s also a great byproduct of cannabis growing. Many people may just keep the buds and ditch the leaves and trimmings, but there’s gold on them thar organic materials. Take the trimmings and isolate the trichomes from the leaves, branches, and whatever else they shake off of, press it, and you got yourself some free hash.

We might be entering a depression, and this is the least you can do.

How can I smoke hash?

There are many ways to consume hash. It can be eaten, baked into food, or boiled into a piping hot pot of tea or black coffee. It can be smoked in a pipe, bong or – for charas – a chillum. One of the most popular methods is mixed in with tobacco in a joint.

But what can you do if you have no pipe, no papers, just a lighter and a dream? You’re in luck.

One of the oldest stoner hacks ever invented was the idea to smoke hash in a cup. Way before there were “lifestyle blogs,” Buzzfeed lists, or Al Gore’s Internet, stoners knew about this life hack for smoking hash. It’s a great way to get you out of a bind, will make you feel very resourceful, and it lets you hit the hash smoke straight, unadulterated, like the DEA intended.

How to smoke hash in a cup


First things first, you need your supplies. Get some hash, a paper clip, and a small glass, ideally, one that’s more cylindrical then circular. Also, grab a straw or a small hollow tube.

The first thing you’re going to do is take the paper clip and bend one side of it, so it sticks up straight while the rest of the paper clip rests on the table. Then you take a small piece of hash, about the size of a pencil eraser, and skewer it on the paper clip.

Take that lighter and start heating the hash until it catches fire. Let it burn for a few seconds until you can see it glow almost like a little ember. You can then blow it out or just put the glass over it to extinguish it.

Quickly put the glass over the paper clip and wait for the glass to fill up with hash smoke. Take the tube or straw and stick it right next to the base of the glass, lift it up a tad and inhale all that sweet hash smoke into your lungs.

If you don’t have a straw, you can just put your lips right next to the glass and pull hard. It works, trust us.

Smoking hash in a cup is an easy and very effective way to smoke hash pure, giving you an unadulterated taste of that smoke without any tobacco, papers, or whatever else that foreign exchange student at your high school said to put in there.

In 2020, we have more ways of getting high off cannabis than anybody could have imagined thousands of years ago when Nepalese farmers were rolling balls of keef into hash. But the classics are holding strong – and nothing is more timeless than hashish.