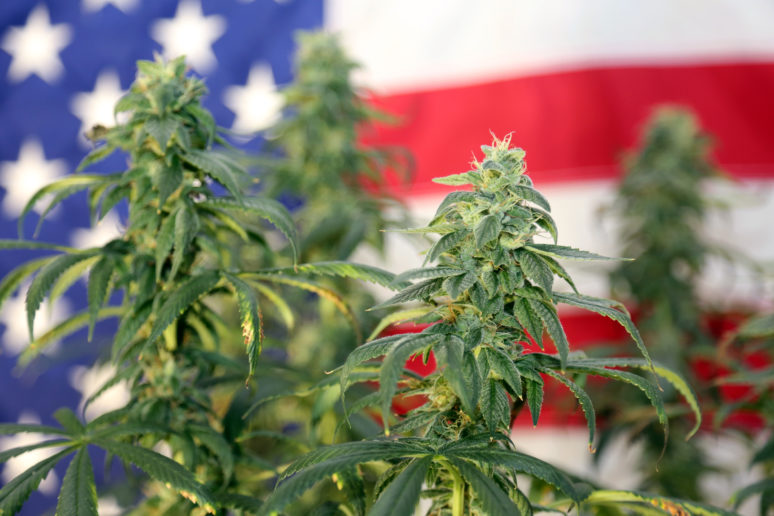 Today, the House of Representatives voted to federally legalize cannabis with a vote of 220-204, mostly along party lines, sending the legislation to the Senate.

Three Republicans – Reps. Matt Gaetz, Brian Mast, and Tom McClintock –  voted alongside the Democratic majority, while two Democrats voted no with the GOP.

It marked the second time the Democrat-led House passed a bill to decriminalize pot, the first happening in December 2020.

The Marijuana Opportunity Reinvestment and Expungement Act decriminalizes possession, distribution and manufacture of cannabis – and no longer classifies it as a Schedule I substance under the Controlled Substances Act.

Republicans took to the House floor to call the bill half-baked.

‘It’s been obvious for years that marijuana was going to be formally legalized at some point. However, this bill’s deeply and truly disturbing is its failure to address the clear consequences of legalization,’ warned Rep. Cliff Bentz, an Oregon Republican, who was leading the debate.

‘But the main priority for the Democrats isn’t Ukraine, skyrocketing gasoline prices, 8 percent inflation, or the border crisis. No, instead, it’s marijuana,’ Bentz said.

All but two Democrats came out in favor of the bill.

Those voting against it included New Hampshire Rep. Chris Pappas, who heralds from a swing district, and Rep. Henry Cuellar.

In addition to decriminalizing cannabis at the federal level, the bill would establish procedures for expunging previous convictions from people’s records and impose a tax on the sale of cannabis products.

The tax would begin at 5 percent and eventually increase to 8 percent. Funding raised through the tax would go toward a fund to provide job training, mentoring, substance-use treatment, legal aid, re-entry services, and youth recreation programs. It would also provide loans to help small businesses in the cannabis industry that are “owned and controlled by socially and economically disadvantaged individuals,” a summary of the bill said.

“This landmark legislation is one of the most important criminal justice reform bills in recent history,” House Speaker Nancy Pelosi, D-Calif., said in remarks on the floor Thursday about the measure.

According to the National Conference of State Legislatures, thirty-seven states and Washington, D.C. have enacted laws legalizing medical marijuana, with 18 states and D.C. legalizing marijuana for recreational purposes. California became the first state to legalize medical marijuana in 1996. Pelosi highlighted the changes made at the state level over the last few decades.

“Now it is time for the federal government to follow suit,” she said.

Meanwhile, Senate Majority Leader Chuck Schumer, D-N.Y., has been working with Sens. Ron Wyden, D-Ore., and Cory Booker, D-N.J., to craft similar legalization legislation in their chamber. Prospects for passing such a bill in the Senate appear to be low because Democrats would need all of their members and 10 Republicans to overcome a 60-vote hurdle needed to advance to a final vote.