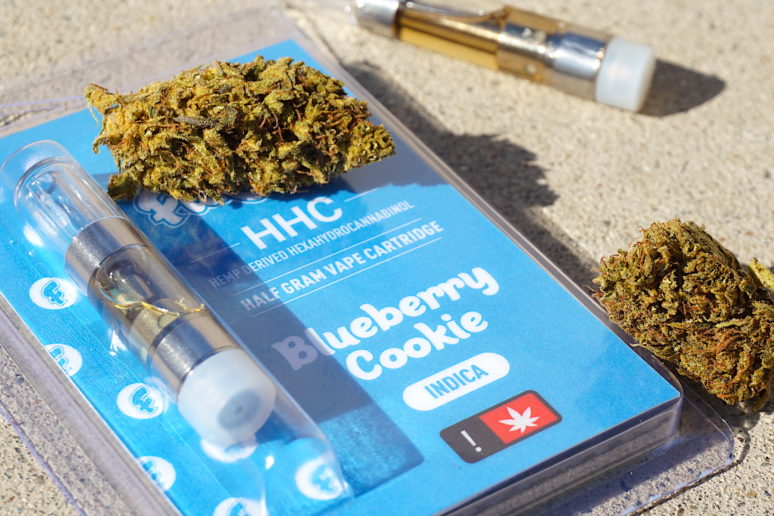 Who would have thought that hydrogenation played a role in one of the hottest new hemp cannabinoids? Yes, the same process that extends butter’s shelf-life has been used to make a novel THC cannabinoid!

Like the more popular delta-8, HHC is a psychoactive cannabinoid that shares many features with the outlawed delta-9 THC. However, that doesn’t mean HHC is a carbon copy of delta-8. Indeed, people who’ve tried HHC say it has unique effects better suited for select customers.

So, what exactly is HHC, and who would benefit most from its effects? Although we’re still learning about HHC’s properties, initial findings suggest HHC has a few defining traits.

“Hexahydrocannabinol” (aka HHC) may be a super-complicated name, but it’s not difficult to explain. Basically, HHC is just THC with more hydrogen molecules.

To get more technical, HHC is delta-9 THC without double-bonds. In place of these special bonds, HHC molecules have extra hydrogen compounds. This additional hydrogen seems to give HHC a sturdier structure, which may account for its longer shelf-life versus other THC compounds.

Currently, most HHC products are made with legal hemp cannabinoids like delta-8 THC. Even though delta-8 has a unique structure, the resultant HHC is virtually indistinguishable from delta-9-derived HHC.

Since hydrogenation increases a product’s lifespan, many people believe HHC extracts could be more stable than plant-derived THC molecules. If these suggestions are correct, HHC could have many attractive uses in fields such as hemp-derived medicine.

Is It Legal To Buy HHC In The US?

In truth, there’s no clear federal guidance on how to view THC hemp cannabinoids. Aside from delta-9 THC, every hemp-derived chemical is technically legal in the USA. However, many state lawmakers believe they should hold chemicals like HHC to the same standards as delta-9.

Indeed, as delta-8 continues to gain popularity, some local districts have introduced bans on this substance. If HHC gains as much hype as delta-8, it could face a similar fate in select states.

Generally, if customers live in a territory with relaxed recreational weed laws, there’s a low chance state regulators will come after HHC. By contrast, states with strict cannabis standards may make it increasingly challenging to get cannabinoids like delta-8 or HHC.

If a hemp company doesn’t publish third-party lab tests, there’s no way to know how much delta-9 is in their products. Indeed, in many states, hemp extracts without Certificates of Analysis are technically illegal.

Always demand solid evidence that an HHC cart, gummy, or flower meets the 2018 US Farm Bill’s standards. If manufacturers refuse to give you this info, please walk away.

Does HHC Feel Any Different From Delta-9 THC?

The little evidence we have on HHC suggests it’s not as intense as delta-9 THC. Many anecdotal testimonies claim HHC is weaker than delta-8 or delta-10 THC.

Supposedly, HHC can only bind to CB1 receptors at half the strength of delta-8. Since delta-8 is already less intense than delta-9, HHC should have a less pronounced effect on users.

Even though HHC isn’t as strong as delta-8, it still has noticeable psychoactive properties. Many people who use HHC claim they feel a light “head-buzz high” that’s accompanied by feelings of improved mood and better focus.

HHC may offer “sativa lite” effects if these reports are true without a significant risk of panic attacks and lightheadedness. This makes HHC a potential option for people who enjoy microdosing cannabis. HHC’s weaker effects may also make it a good choice for hemp smokers new to THC cannabinoids.

Is HHC Less Intense Than CBD?

Although HHC isn’t as potent as other THC cannabinoids, it’s not as subdued as CBD. Unlike HHC, CBD doesn’t bind with CB1 receptors in the brain. Indeed, most recent research suggests CBD actively blocks THC molecules from affecting a person’s brain.

Officially, CBD is non-psychoactive, whereas HHC is mildly psychoactive. Since CBD carries no risk of psychoactivity, it’s better suited for customers who’ve never tried hemp before. It’s far less likely someone would experience adverse side effects taking CBD versus HHC.

People with pre-existing conditions like generalized anxiety or PTSD should always start with CBD. While THC cannabinoids like HHC may have therapeutic potential, they also carry a greater risk for panic attacks.

Does HHC Have Side Effects?

There’s always a chance users will experience side effects when using hemp cannabinoids, especially THC-related compounds like HHC. Due to THC’s psychoactivity, it hits harder than non-intoxicating substances like CBD or CBG. Hence, even at comparatively lower doses, HHC could induce adverse reactions.

A few side effects commonly associated with HHC include:

Generally, the more HHC a person takes, the greater chance they’ll experience one of these symptoms. Patients with a pre-existing anxiety disorder also have a higher risk of experiencing panic-related symptoms.

To minimize the chance of an adverse reaction, new customers should always start with the lowest recommended dose of HHC. It’s also helpful for patients to keep a dosage journal to record their HHC experience. Please only increase the total amount of HHC in small increments each day.

Could People Make HHC At Home?

Nobody should experiment with making HHC at home. Unless you’re working in a well-equipped lab with a well-trained staff, it’s unsafe to extract HHC from hemp flowers.

Even world-class chemists must use advanced safety equipment to successfully create a batch of HHC. One minor error could easily trigger a fiery explosion, especially in a low-tech setting.

Interestingly, a significant reason many hemp fans get into HHC has to do with drug screenings. According to online rumors, HHC doesn’t appear on standard drug tests. People who believe this theory claim you could vape HHC during your lunch break and still pass a cannabis test.

In reality, there’s no empirical evidence to back up these statements. HHC might be less detectable than other THC derivatives, but it’s doubtful HHC molecules wouldn’t register on a standard THC screening.

Please remember that HHC shares a similar structure with delta-8 and delta-9 THC. Hence, there’s no reason to assume it will “fool” a drug test. Until there’s further evidence to the contrary, customers shouldn’t use HHC to enjoy a sneaky at-work “high.”

Employees should always exercise caution when trying new THC products like HHC. There are no guarantees HHC won’t mess up a drug screening.

How Do People Take HHC?

There aren’t as many HHC products on the market compared with delta-8 or CBD. Indeed, most people who want to use HHC nowadays have to settle for hemp-derived vape carts.

Although vape juices are the most popular HHC goods, you should begin to see more HHC offerings as demand increases. Indeed, it’s getting easier to find HHC fortified flowers, edibles, and tinctures at a few boutique hemp shops.

Just how many HHC products will become available depends on its popularity and further legal clarification.

Who Should Take HHC?

Many unknowns are surrounding HHC’s uses and standard effects. However, the latest data suggests this cannabinoid is well-suited for customers who want an ultra-mild “high.”

HHC probably won’t blow away veteran delta-8 smokers, but it should provide a noticeably pleasant head-buzz sensation. Customers who have never used a hemp THC cannabinoid before may find it easier to start with HHC before going to delta-8 or delta-10. Also, people who love microdosing hemp may enjoy HHC’s subtler effects.

However, since HHC is psychoactive, it’s not the best choice for total hemp newbies. For the safest experience, new customers should start with non-psychoactive cannabinoids like CBD and CBG. These cannabinoids have a lower risk of side effects, and they have more extensive data.

After people build a tolerance for high-CBD hemp flowers, they should be ready to test HHC products. Just be sure to start with the lowest recommended dose of HHC and slowly work your way up. Following all of these steps will minimize the risk of panic attacks.