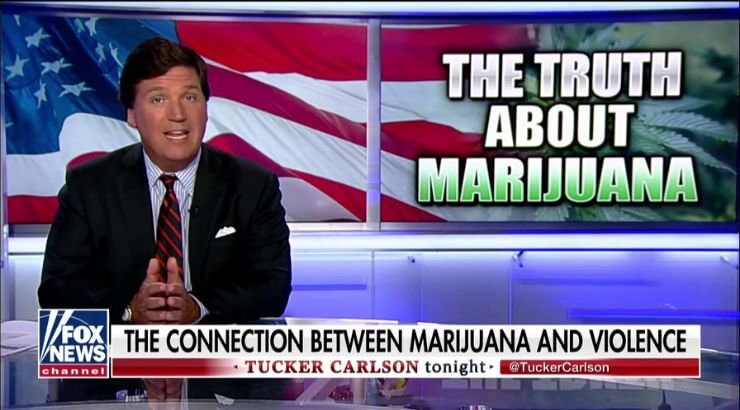 Controversial FOX News host Tucker Carlson recently had a guest on his show to support his argument that cannabis may be to blame for the recent string of shootings seen in the United States. The guest was Alex Berenson, former New York Times journalist and author of the book Tell Your Children: The Truth About Marijuana, Mental Illness, and Violence.

Berenson’s work has not received much support from the scientific community and has even been rejected by many of the same scientists who were referenced in the book. The researchers have suggested that many of the studies cited in the book were taken out of context. They have also said that Berenson put forward conclusions that their data did not support.

The scientific community was so dismayed by Berenson’s misrepresentation of the current data, that researchers from a variety of prestigious universities penned an open letter taking him to task for the claims made in his book, and urging lawmakers to disregard his writing when considering laws on legalization. The signatories included experts from New York University, Harvard Medical School and Columbia University.

“We urge policymakers and the public to rely on scientific evidence, not flawed pop science and ideological polemics, in formulating their opinions about marijuana legalization,” the letter stated.

The premise of Berenson’s argument is that people who commit violent crimes often happen to have cannabis in their systems. On Carlson’s broadcast, Berenson pointed to the recent case of the shooter in Dayton, Ohio, claiming that marijuana could have been a factor in the violence.

The pair discuss the shooter’s toxicology results, which included Xanax and cocaine as well as marijuana, choosing to skip over the other more powerful drugs to focus on marijuana, which is known to keep people more calm and relaxed than not.

Berenson believes that marijuana has a strong link to psychosis, but this is heavily debated among scientists, and even those who do support this theory believe that marijuana can only trigger the symptoms in people who are already severely mentally ill. However, this much can also be said for any mind-altering substance, especially prescription pharmaceuticals like Xanax.

In the case of Xanax—which was also found in the shooter’s system—violence fits of rage and psychosis are all fairly common side effects that are well documented and scientifically proven.

In recent years, many online sources have suggested that there is a link between prescription drugs and mass shootings, but mainstream fact-checkers have taken issue with these claims, contending that a large number of people in the United States are on prescription drugs, which means that it is only natural that a shooter, or their victims for that matter, would have a high chance of having those substances in their system. If this is true, the same thing can be said for marijuana, which is now used by a large segment of the population, in both legal and non-legal states.