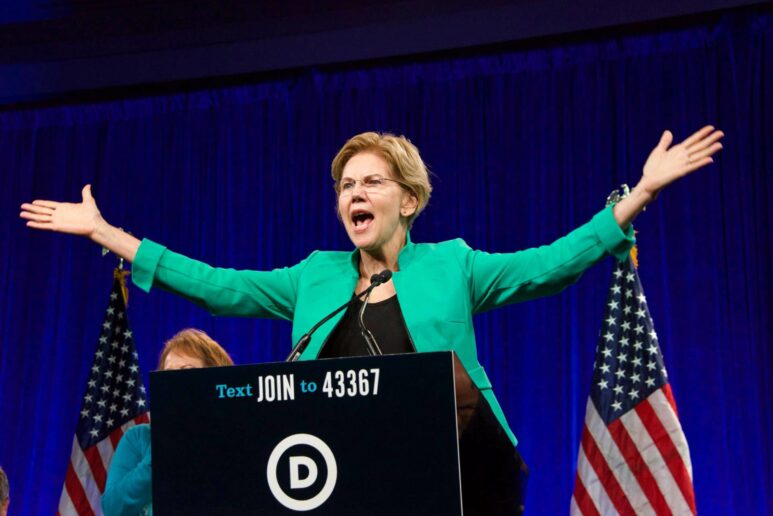 Full federal legalization, expungement of criminal records, and massive economic assistance to the communities most adversely affected by the War on Drugs – all of these proposals are part of the sweeping plan for Cannabis Legalization that Massachusetts Senator Elizabeth Warren published on Monday on her 2020 Presidential Campaign website.

“It is not enough to legalize marijuana for future use. We must also consider the countless individuals who have been arrested or incarcerated for behavior that we now recognize should never have been criminalized in the first place – many of whom are living with collateral sanctions that trap people in a paper prison long after their arrest,” Warren states on the position page.

Warren said that first and foremost, she will work with Congress to legalize marijuana and pass legislation like the Marijuana Opportunity Reinvestment and Expungement (MORE) Act of 2019. Introduced by Senator Kamala Harris, the bill decriminalizes and deschedules cannabis, expunges certain cannabis offenses, and provides “for reinvestment in certain persons adversely impact by the war on Drugs.”

If enacted, the bill would give the Attorney General 180 days to remove marijuana and tetrahydrocannabinol from the controlled substances list. The bill would be retroactive and allow for the expungement of past marijuana offenses.

Warren says that she would use her executive authority to clean house, and appoint pro-legalization agency heads at the Department of Justice, Drug Enforcement Administration, Food and Drug Administration, and Office of National Drug Control Policy.

On her website, Warren also reiterates her support for Senator Cory Booker’s Marijuana Justice Act, which in addition to descheduling marijuana, would have the United States Treasury “establish a grant program to reinvest in communities most affected by the war on drugs.”

Among other measures, those listed include job training, reentry services, funding programs for expunging records, and a “community investment fund” that would total $500,000,000 in funds between 2020 and 2042.

The bill also proposes a 5% federal tax on cannabis sales, clearing up much of the confusion of the tax schedule on cannabis.

Titled “A Just and Equitable Cannabis Industry,” Warren’s far-reaching plan has at its core a socially-conscious mission to repair the damage done in communities of color by the War on Drugs, and ensure that they can also be part of the booming legal marijuana industry.

Research has shown that people of color make up less than a fifth of the owners or stakeholders in the marijuana industry.

“We cannot allow affluent and predominantly white hedge-funders and capital investors to hoard the profits from the same behavior that led to the incarceration of generations of Black and Latino youth,” Warren states.

She also integrated marijuana policy into her immigration plan, which states that she will make sure that those “with non-violent drug offenses such as marijuana possession are protected from deportation and eligible for a pathway to citizenship as part of a just immigration reform.”

Her plan also calls for the Veterans Affairs Administration to change its approach banning the recommendation of medical marijuana for veterans, and to make sure that veterans are not denied home loans because they work in the cannabis industry.

Warren calls for removing the barriers on federal research of marijuana “so that we can finally begin to study its additional uses and ensure that marijuana products being  sold are safe and effective.”

Her plan would also lift the federal interference in Washington D.C.’s enactment of their own marijuana legalization policy, and allow tribal authorities to have the sovereignty to oversee their own drug policies.

In addition to a socially-conscious look at the racial history of US drug policies, Warren examines the effect of US policies outside of the country, saying “we must also recognize the role our War on Drugs has had in destabilizing Latin America – a root cause of migration to the United States. As president, I will end the failed war on marijuana abroad which has failed to significantly curb violent effects of the drug trade and has not made us safer. I support the legalization of marijuana in any nation that wishes to do so and fully support our neighbors exercising their sovereignty when it comes to their internal drug policy.”

In Warren’s home state, non-medical recreational marijuana sales were legalized in 2016. She was one of 11 senators who, in 2017, signed a letter to then-Attorney General Jeff Sessions to “uphold the DOJ’s existing policy regarding states that have implemented strong and effective regulations for recreational marijuana use.”

Most of the leading candidates running in the 2020 Presidential Election have expressed support for policy changes ranging from full-on legalization to measured decriminalization.

President Donald Trump, for his part, has had an unclear approach to the issue. He has previously stated that he believes states should set their own policies, though last week a Trump campaign official said the president has no plans to change federal laws on marijuana for the time being.