Dude Who Smoked Weed In The Capitol During The Jan. 6 Attack Gets Three Years In Prison 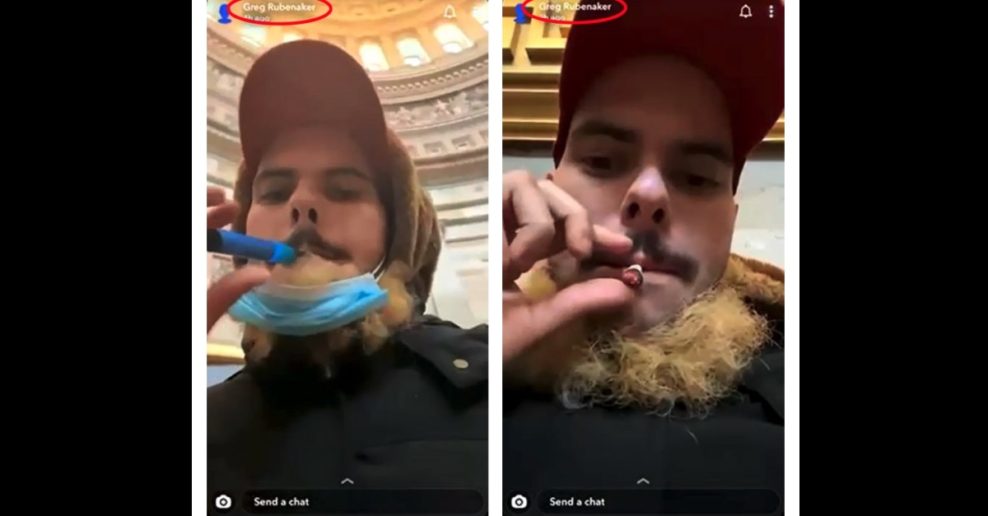 Dude Who Smoked Weed In The Capitol During The Jan. 6 Attack Gets Three Years In Prison

Yesterday, a Long Island disc jockey who filmed himself smoking weed inside the U.S. Capitol during the January 6 attack was sentenced to three years and five months in prison — chastised by a judge for his “bloody entitled” attitude.

“This is history! We took the Capitol,” Greg Rubenacker declared with a blue vape pen hanging out of his mouth in cell phone footage played at his sentencing in U.S. District Court in Washington, D.C.

Rubenacker, who pleaded guilty to all ten counts that he faced, was among a horde of supporters of then-President Donald Trump who tried to disrupt President Biden’s election victory certification. The riot at the U.S. Capitol ultimately led to the deaths of five people, including a police officer.

Judge Howell said Rubenacker’s case stood out because he was part of the vanguard that forced its way through the door to the Senate wing within 60 seconds of the initial breach.

“I want to emphasize that chasing Officer Goodman up the stairs was antagonistic conduct, it was threatening conduct, it was scary conduct,” said Howell. “[Rubenacker] filmed himself walking through the hallways of the Capitol saying things like, ‘Holy shit. This is history. We took the Capitol,’ clearly exhilarated by the fact that all the people in this crowd were able to overwhelm the police.”

Rubenacker exited the building but would illegally reenter a second time 20 minutes later through the Rotunda doors.

He was “excited to start smoking marijuana and pumping on a vapor. He brazenly filmed himself doing that and posted it on social media with the caption: ‘Smoke out the Capitol, baby! Smells like freedom in here,’” said Howell.

“To me, that strikes me as a person feeling so bloody entitled with his right to be there inside the Capitol building and was so exhilarated and excited about this ability to overwhelm the police, he celebrated by smoking marijuana.”

An apologetic Rubenacker, who told the court he’s a passionate music maker, said he’s reformed due to therapy over the last 12 months.

“My actions on January 6 don’t match who I am, and I am truly sorry,” he said.

More than 800 people have been arrested in nearly all 50 states for participating in the insurrection, including more than 250 people authorities say assaulted or impeded law enforcement.