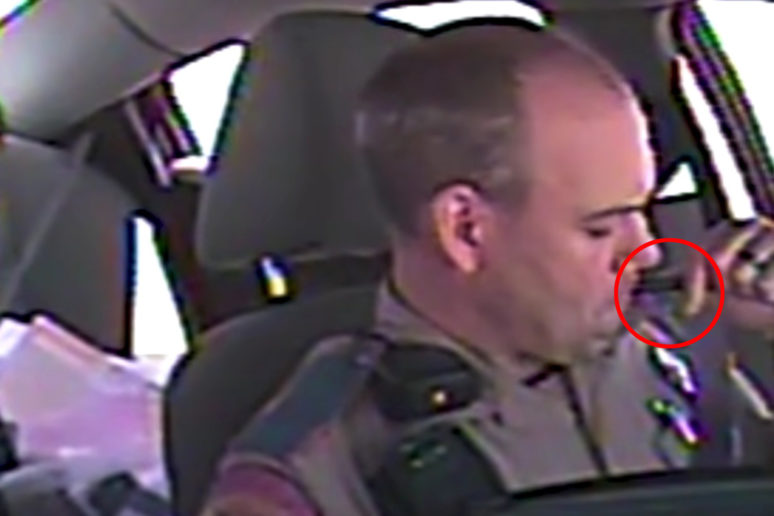 A Texas trooper was caught on his police cruiser’s own dashcam vaping confiscated marijuana, according to newly released footage.

The video is from 2019 but only just came to light — after the lawyer repping several drivers who were stopped by the same state trooper near Wichita Falls sought evidence against the officer, the dogged attorney told The Post.

“The public should find it abhorrent any time there’s a breach of public trust,” said Fort Worth lawyer David Sloane. “We place people in a position of trust when they enforce the law.’’

Chad Harden, the now-former trooper with the Texas Department of Public Safety, was caught on camera inhaling pot from a vaping pen he’d just taken from a suspect, according to the video.

“I accidentally inhaled THC, as stupidly as that sounds,’’ Harden later admitted to an investigating officer, according to audio of the footage that Sloane posted on YouTube.

“I felt it fill up my lungs. I pushed it out as fast as I could,’’ Harden claimed. “I did not mean to inhale it.’’

Harden was suspended in June 2019 when he came under investigation by the Texas Rangers and resigned from his job three months later, the local Times Record News reported. It wasn’t immediately clear if the vaping video was part of that probe.

But the ex-cop was ultimately charged with tampering with evidence and copped to a plea deal this past August that landed him two years’ probation, the outlet said.

Meanwhile, Sloane said the cannabis-possession charges against his clients were dismissed. None of them were involved in the vaping video, he said.

You can check the video here: