Customgrow420 Gets Called Out for Raffling off Puppy, Attacks Koala Puffs 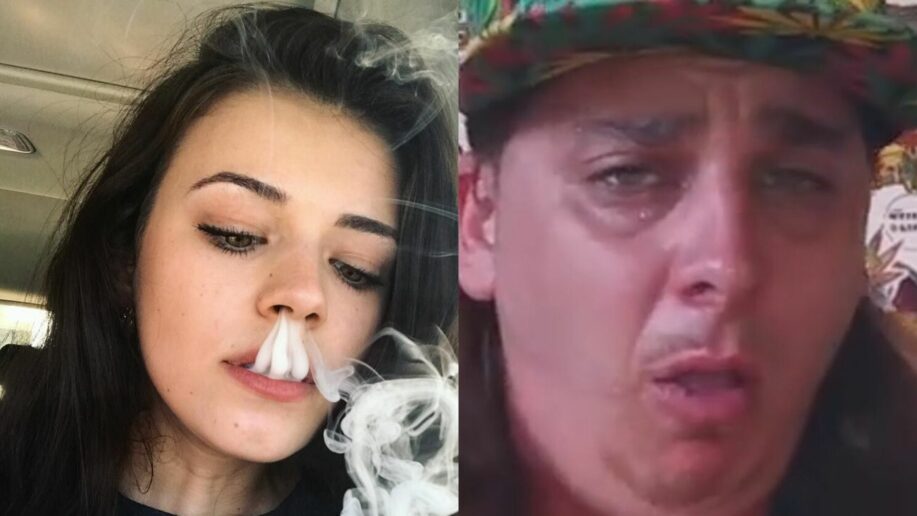 Former weed YouTuber and self-proclaimed “SOCIAL MEDIA GIANT” Customgro420 just tried to promote an upcoming Instagram puppy raffle by some pitbull breeder. If your first reaction to the words “Instagram puppy raffle” is “wtf is wrong with you?” you’re definitely not alone. 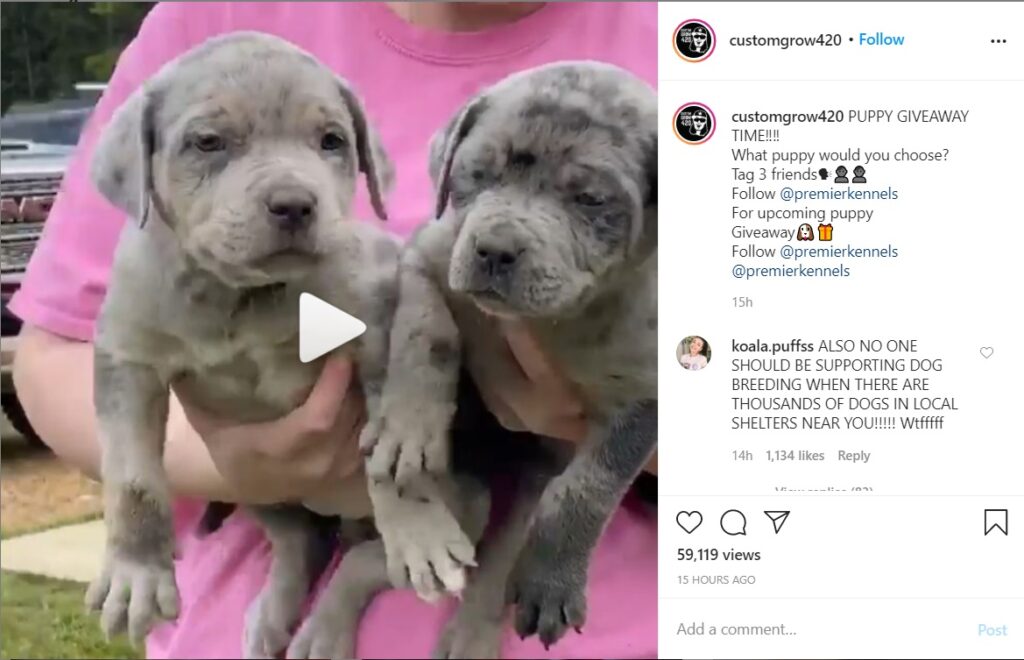 420 influencer and entertainer Koala Puffs had the exact same reaction and sent him a private message, in which she respectfully voiced her concerns about raffling off puppies to random people on the internet and asked him to take the post down.

This would be the point where any person with an ounce of compassion for animals and half a brain cell would realize they probably made the wrong promotion deal and deletes their post.

If you’ve heard of Customgro420 before, you know that’s not what happened. The former Juggalo, whose real name is Joel Adam Hradecky, went into full dick mode and began lashing out at Koala Puffs. This would probably also be a good point in time to mention that Hradecky and a few friends of his were arrested in 2006 for attacking and robbing people at a Washington state park with machetes and hatchets, threatening some of them with decapitation and trying to force a young woman to undress. He later pleaded guilty and was sentenced to 3.5 years in prison. 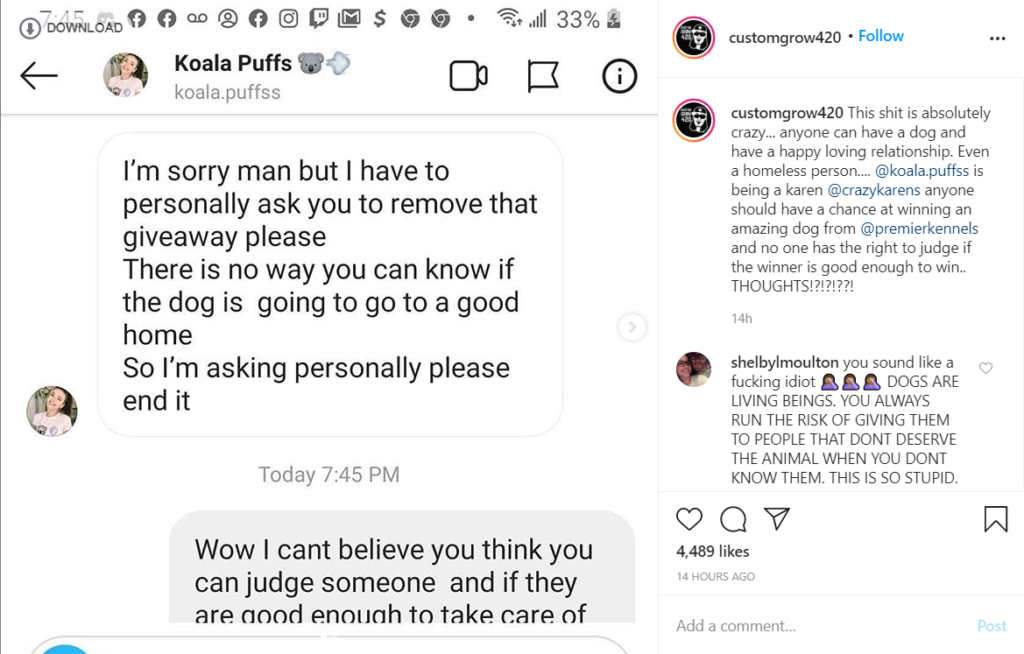 He posted her DM and spiced it up with one of the dumbest captions I ever had to read. “This shit is absolutely crazy… anyone can have a dog and have a happy loving relationship,” he wrote.

“Even a homeless person…. @koala.puffss is being a karen @crazykarens anyone should have a chance at winning an amazing dog from @premierkennels and no one has the right to judge if the winner is good enough to win.. THOUGHTS!?!?!??!”

You may have noticed that Koala Puffs never made any of the points Customgro420 is trying to refute here. Does that stop him from going on a completely insane rant? Boy, you really don’t know the guy, do you?

What followed over the next five hours were five more posts, one crazier than the next, in which Customgro420 goes off on Koala Puffs for the horrible crime of wanting to make sure that animals aren’t treated like packs of rolling papers. 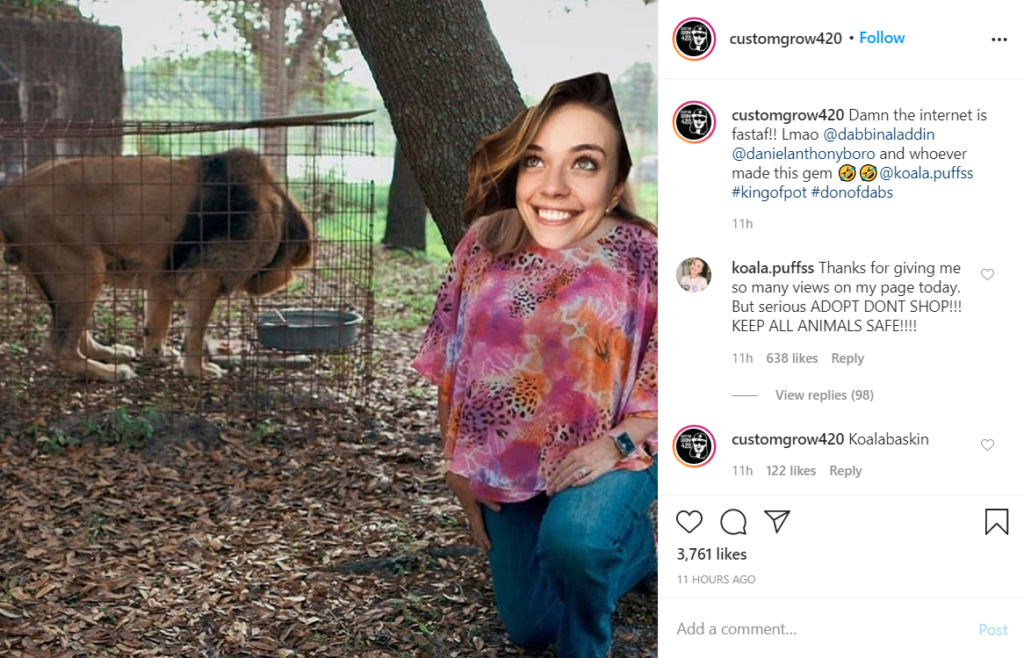 He posted a picture of Koala Puffs’ head “photoshopped” onto a picture of Carol Baskin (if you don’t know who that is, go watch Tiger King on Netflix right now). Undeterred by the hundreds of comments from his own fanbase, if you can even still call it that, that are siding with Koala Puffs on this matter, the 36-year-old “social media giant” spirals further into insanity.

He somehow managed to stalk Koala Puffs enough to find a picture of her with a hooded falcon on her arm, which he captioned “Lmao here we go!!!!!!!!! @koala.puffss you actually participate in this and then want to judge other people and what they do with animals? #hypocrite #animalabuse #fakeasssmile #cringe #youproudofthispic.” 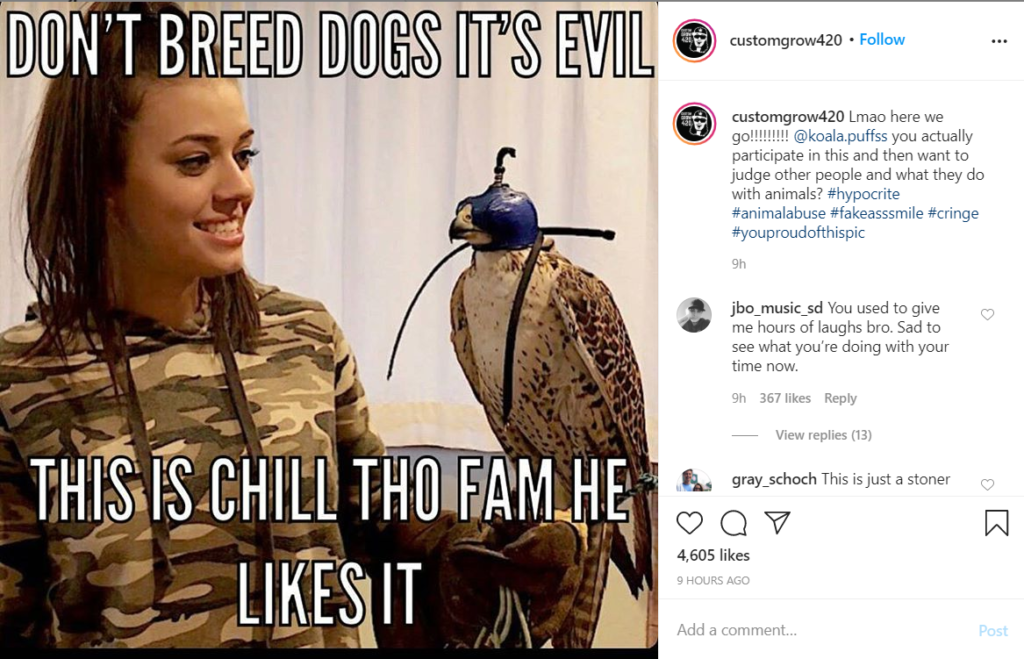 One of his own (former) fan’s comments puts it better than we ever could: “Remember when you actually made content instead of acting like a child on the internet 😂 me too.”

Alright, so he made his point, right? Noooo, we’re not done yet. Next up, Hradecky (try saying that three times in a row) gifted us with a screenshot of an email someone sent him that includes a screenshot of a video of Koala Puffs’ dog sleeping and her accidentally scaring it awake. The email was titled “Koala puff dabss her dogs out,” by the way. 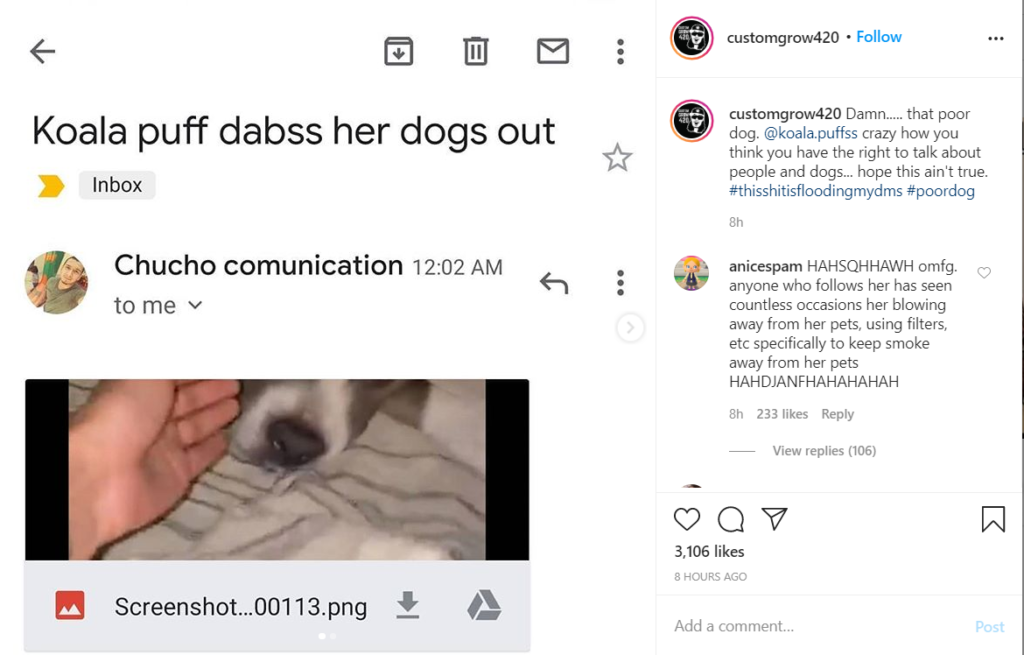 Before he presumably rage-smoked ten bowls, he shared one last gem with us. Take a look at this beautiful picture of Koala Puffs and her amazing dog. Or as Customgro420 sees it: “damn…. poor dog. #notfunny #notajoketogetyourdoghigh.” 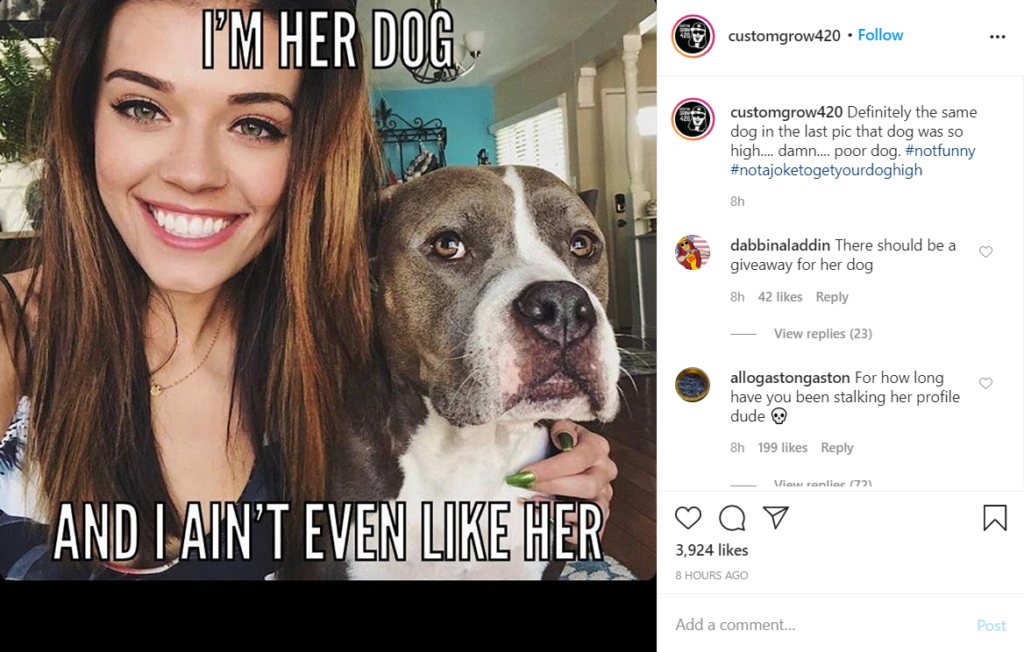 If you’ve made it this far into this clusterfuck of unprovoked Instagram drama, congratulations for still being sane. So what has the dude actually achieved other than showing everyone who wasn’t convinced yet what a dick he is?

For one, he’s already lost a few thousand followers, so that’s good. He’ll probably lose a few sponsorship deals over this, which should hurt a little more since his entire account literally consists of promo posts (and six posts in which he attacks, stalks, and bullies a perfectly nice young woman).

While you’re reading this, Customgro420 is probably only just waking up, so stay tuned to see if he got any smarter while he slept or if he’ll bless us with another hissy fit because someone disagreed with him.

Whatever he does, it can’t get much worse than what Dabbing Granny brought upon herself last month. We’ll leave you with this picture of two scumbags of the cannabis community having a great time together. A picture really does say more than 1,000 words. 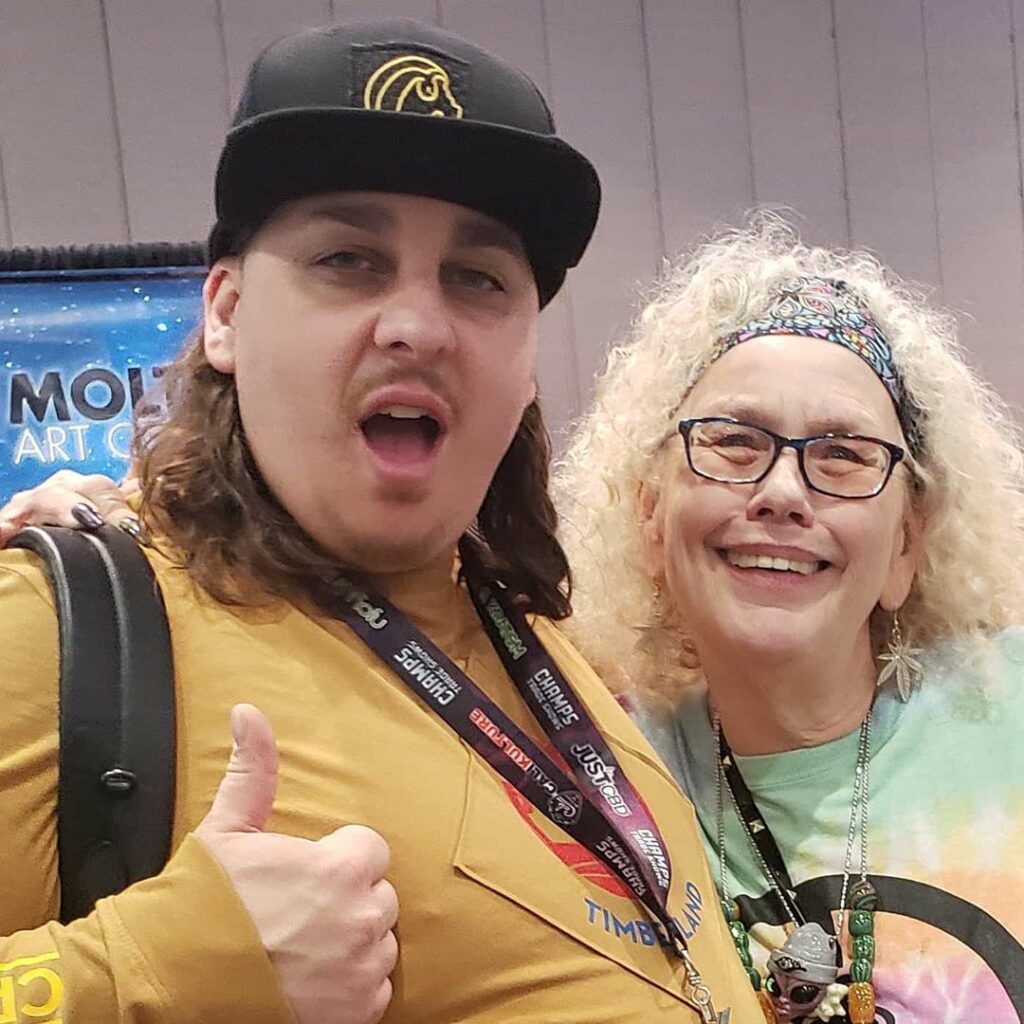